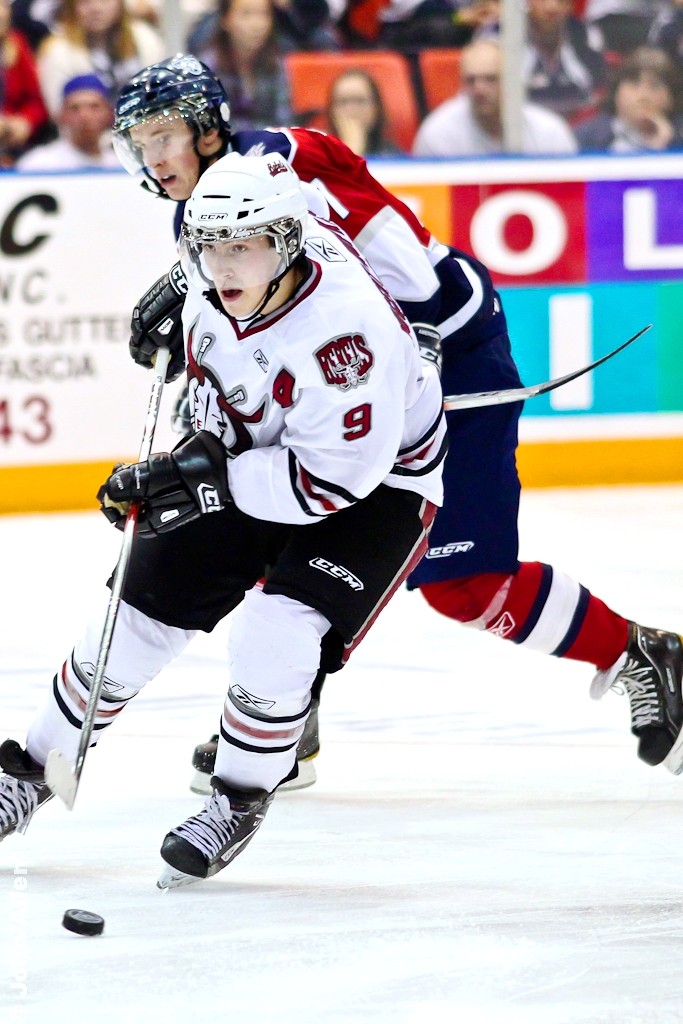 The six-foot centre is keeping it all in perspective though and remains humble about the two achievements.

“It’s definitely a big honour for me,” said Nugent-Hopkins of his Central Scouting ranking. “But I really don’t want to take it for granted.”

When asked about leading some of the best **>junior hockey<** talent in Canada for a night, the Rebels’ assistant captain stays modest.

“That’s a huge honour,” said Nugent-Hopkins. “When I found out I was a little bit surprised. It’s definitely something I’m really looking forward to.”

Trailing left-winger Gabriel Landeskog of the Kitchener Rangers and centre Sean Couturier of the Drummondville Voltigeurs in pre-draft rankings, Nugent-Hopkins is expected to be a top-five selection.

That range puts the native of Burnaby, B.C., in position to be drafted by such Canadian teams as the Ottawa Senators and Edmonton Oilers.

“I’ve always liked Ottawa,” he said. “Jason Spezza was my favourite player for quite a long time when he came in to the league.

“And Edmonton is a good, young team. Either one would be really cool to go to. I hope I just get drafted to somewhere that would like to have me.”

As for showcasing his talents at the annual Top Prospects game, the play-making centre wants to focus on the fundamentals of his play.

“I’m just going to play my game and try to have fun with it,”
said Nugent-Hopkins. “I just try to use my speed and my agility to my advantage.”

In the long run, the 17-year-old centre knows he has to work on his strength and conditioning.

“I need to put on some size, gain some weight,” said Nugent-Hopkins, who’s listed on the WHL’s website weighing 164 pounds. “Keep working on my strength and work on my shot as much as I can.”

Renowned for setting up his Red Deer teammates on the power play and at even strength, Nugent-Hopkins is his team’s scoring leader with 13 goals and 43 assists in 43 games. He is just 10 points shy of his career-best numbers.

Always looking to improve his game, Nugent-Hopkins wants to become known as a two-way player.

“I’m working on trying to stay between my man and the net, mostly,” he said. “Trying to stay on the `D’ side of him, stick on puck and play the body as much as I can.”

His goal is simple: emulate NHL all-stars who’ve made their mark at both ends of the ice. It’s working so far this season, as Nugent-Hopkins’s plus-minus rating is at a personal best plus-14.

“There’s guys like Jonathan Toews and Pavel Datsyuk who are so good offensively and defensively, and then obviously there’s Sidney Crosby,” said Nugent-Hopkins. “Those kinds of guys, you can always learn stuff from them and keep on working at what you do best.”

Before he gets drafted, though, Nugent-Hopkins has one last objective in the WHL.

“Winning a Memorial Cup would be pretty awesome,” he said.
“Something you always want to do and hopefully we get a chance at that this year.”

The Rebels currently sit atop the Eastern Conference’s Central Division with a 29-12-5 record for 63 points. But they’re just two points ahead of the Kootenay Ice (29-13-3, 61 points), who have a game in hand.