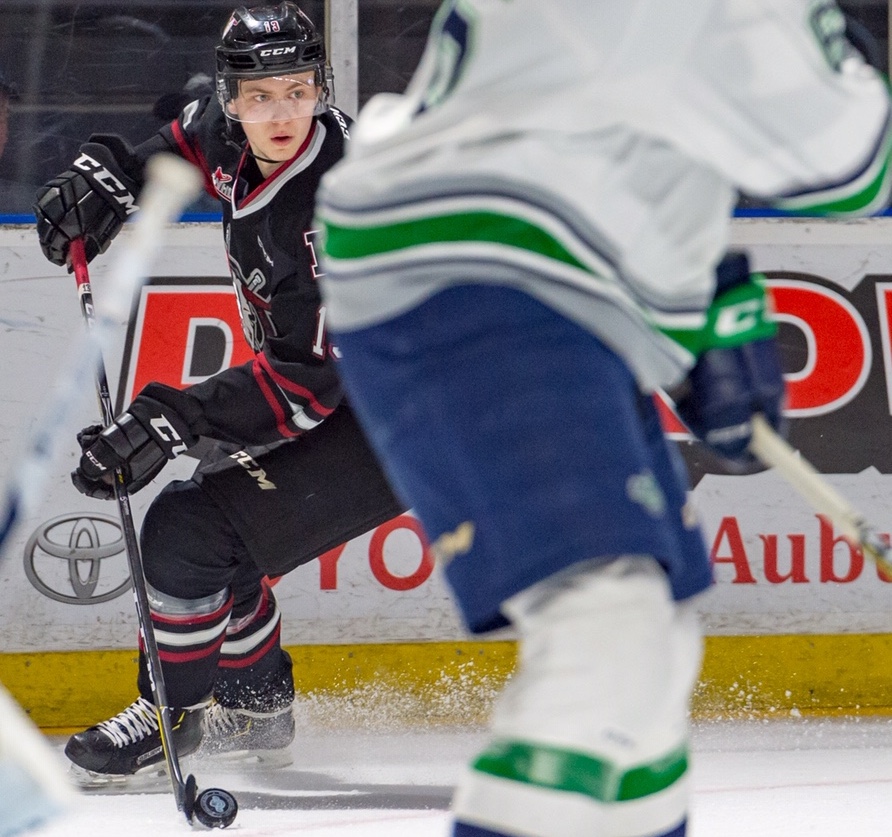 The Russian forward recently informed Rebels GM/head coach Brent Sutter that he was strongly considering remaining at home in Moscow instead of returning for a second season with the Western Hockey League team.

That decision was supposed to be forthcoming on Tuesday, but Sutter said the player still hasn’t decided one way or another and that the Rebels will protect his rights instead of leaving him open for the 2019 CHL import draft, which takes place on Thursday.

Zaytsev was selected by the Rebels in last year’s import draft and after a strong start to the season his play gradually tapered off. He never appeared to be completely comfortable during his rookie season, understandable considering he didn’t have a grasp on the English language and was a stranger to the North American culture.

“Oleg is a very good hockey player,” said Sutter. “He’s like a lot of young players who have tougher times than others coming into this league, which is part of growing as a player.

“At this point in time he’s contemplating staying at home, but if he has a change of heart our arms are certainly open to taking him back.”

Zaytsev would be a top six and likely a top three forward with the Rebels in 2019-20 after scoring 13 goals and collecting 43 points in 66 games last season.

“That’s the thing from our perspective, that he certainly could be a top player for us while playing in a lot of different situations, which would certainly enhance his development,” said Sutter.

“But he has to want to come back to North America. It’s up to him.”

Zaytsev turned 18 in January and played in the NHL/CHL Top Prospects game at the Centrium later in the month. He was a solid bet to be selected in last weekend’s NHL entry draft, but, perhaps based on his indecision on returning to the Rebels and continuing to hone his craft in North America, he was passed over by all 31 teams.

“His agent agrees with us that the best thing for his development and his hopes of becoming an NHL player would be to come back and play major junior here in Red Deer,” said Sutter.

Zaytsev hasn’t given the Rebels a drop-dead date regarding his decision. And so the waiting continues.

“At the end of the day it’s Oleg’s and his mom and dad’s call,” said Sutter. “We’re leaving the door completely open for him to come back here because we know he can be a really good player in this league.

“He’s one of those guys who has a lot of potential, the sky is the limit for him. We like Oleg a lot, as a player and a person and we’ll just see where it goes.

“At the end of the day I hope he makes the right decision to come back here and play. It would be best for his development and best for him moving forward with his career.

“We’ll continue to communicate with Oleg and his parents and agent. We’ve moving forward knowing there’s a chance he won’t be here, but we’re also optimistic that his decision will be to come back.”

Because of Zaytsev’s possible return, the Rebels — with the 25th overall pick — will select just one player in this year’s CHL import draft.

Grubbe and Masters were selected by the Rebels in the first round of the 2018 WHL bantam draft and are both solid candidates to play in the league next season.

The camp, to be attended by 112 players from across Canada, is the first step towards selecting three Canadian teams for the World Under-17 Hockey Challenge set for Nov. 2-9 in Medicine Hat.

Tees native Drew Sim, a Giants prospect, is among four WHL goaltenders invited to the camp.