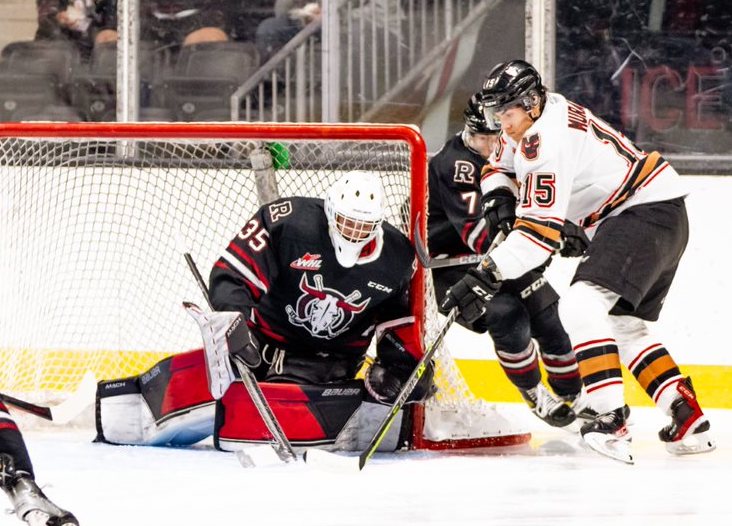 That pretty much describes netminder Rhett Stoesser and his quest to earn regular employment with the Red Deer Rebels.

The 17-year-old came into the Rebels training camp Sept. 1 as an invited player and signed a WHL standard player agreement with the team just over a week later.

As of now, he’s one of three Rebels goaltenders, joining fellow newcomer Kyle Kelsey who was acquired from the Moose Jaw Warriors in May, and Chase Wutzke who was drafted by the Rebels in round two of the 2021 WHL Prospects Draft last December.

“I was the last guy invited (to camp) so it’s been just a different kind of experience for me compared to the other goalies,” Stoesser said Tuesday.

“I was unlisted, undrafted, unsigned . . . everything. I just had to compete really hard to get signed in the first place.”

He earned himself a WHL Standard Player Agreement by impressing the coaches during camp, which culminated with the Black and White intrasquad game, in which he stopped all 15 shots he faced in roughly 30 minutes of work.

“Through camp he’s been the most consistent (goalie) for us,” said head coach Steve Konowalchuk. “He didn’t give up a goal for the first few days I believe. You certainly have to take it seriously when a goalie is playing that way.

“He’s certainly earned the opportunity he’s getting. He’s been pretty solid with a good compete level. He’s been pretty big in net on first shots and he’s been able to save some goals on shots that you might think would be in the back of the net. He’s made some desperate saves.”

Stoesser, who was raised on a farm near Cremona and last season posted a 3.67 goals-against average and .885 save percentage in 19 games with the Airdrie U18 AAA Airdrie Bisons, got the call in Saturday’s 4-2 WHL preseason loss to the visiting Calgary Hitmen, making 30 saves.

“It was pretty unique, really it was the first junior game for me other than with the (Calgary) Canucks,” said the six-foot-three, 190-pound stopper, who was at the Canucks AJHL camp prior to attending the Rebels camp.

“Obviously there’s room to improve. I thought there was a couple of areas that were weak, but other than that it was exciting. Different for sure.” 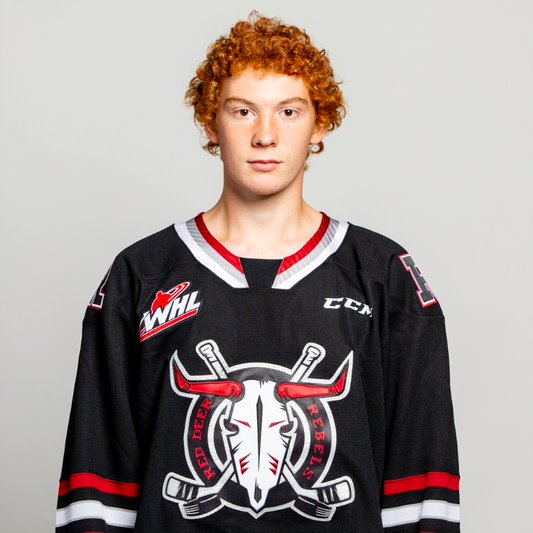 Stoesser appeared in one AJHL preseason game with the Canucks, a 6-2 loss to Okotoks, allowing just one goal on 14 shots through half of the contest.

“I just go with the flow. I haven’t trained with anyone for a long time,” he said.

Now he has the benefit of an experienced coaching staff and a goaltender instructor in Ian Gordon.

Rebels associate general manager Shaun Sutter thought enough of Stoesser to invite him to camp and the rookie hasn’t disappointed.

“Rhett was our only free agent invite to our main camp and epitomizes the underdog who has been a pleasant surprise,” said Sutter. “He has made the most of the opportunity playing himself into the goalie equation with a solid performance while utilizing his size and efficiency to be consistent.”

The Rebels wrap up preseason play this weekend, taking on the Hurricanes Friday in Lethbridge and hosting the ‘Canes Saturday at 7 p.m. at the Peavey Mart Centrium.