Turnovers prove costly to Rebels in loss to visiting T-Birds 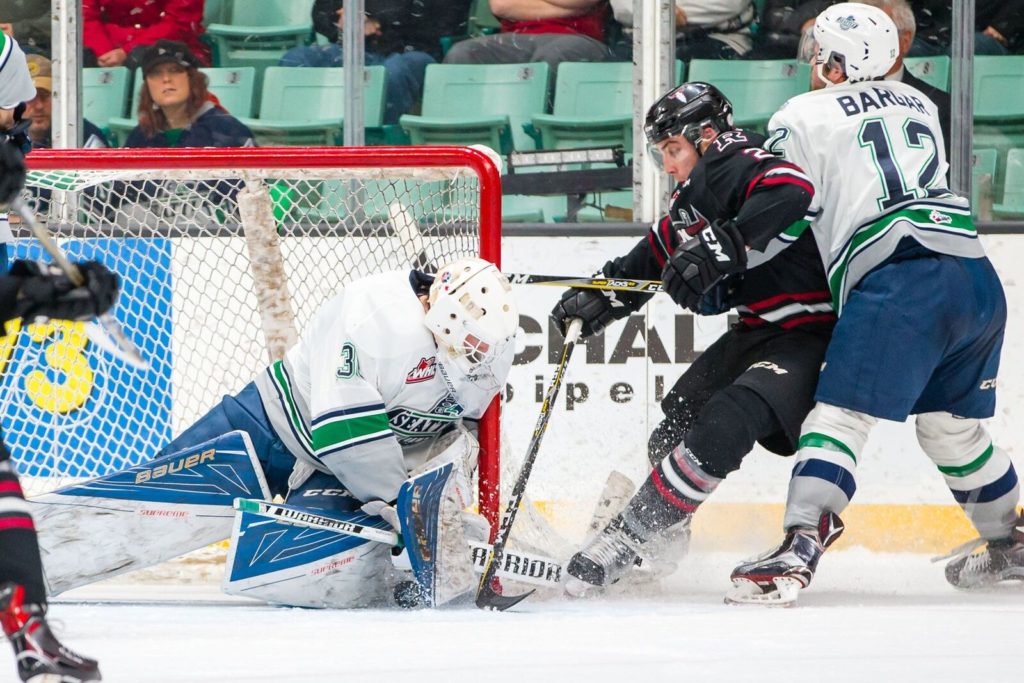 Thunderbirds 4 Rebels 2
Red Deer Rebels GM/bench boss Brent Sutter didn’t hesitate when breaking down the difference between winning and losing Wednesday.
“Bad coaching,” said Sutter, following a 4-2 WHL loss to the Seattle Thunderbirds before an audience of 3,577 at the Centrium. “Playing those guys in the third period, our so-called best players.
“They were terrible tonight and I shouldn’t have had them on the ice in the third period. I shouldn’t have had them on the power play in the last four minutes. That’s my fault.”
Sutter was referring to his older, veteran skaters who for the most part fell well short of expectations in terms of overall performance.
“It’s unacceptable,” the head coach continued. “(Brandon) Hagel was terrible tonight, (Lane) Zablocki was awful.
“Our older players didn’t play like they need to play and when you have that, when your best players aren’t your best players and they’re your worst players, you struggle. And you put other players in situations that they probably struggle in too.”
In the end, it was a pair of terribly untimely turnovers that spelled the Rebels’ fate.
With the hosts holding a hard-earned 2-1 lead midway through the third period, a giveaway in the Red Deer zone led to a a tying goal from T-Birds winger Nolan Volcan, who connected from the low slot.
Then, with the Rebels on their fifth consecutive power play — and third of the final frame — after killing off four straight infractions of their own in the middle period, Donovan Neuls pounced on a turnover at the Seattle blueline and headed up ice. The overage forward got the inside position on a pursuing Red Deer defender and beat Rebels netminder Ethan Anders with the winning goal at 16:32.
Sami Moilanen iced it with an empty-net marker in the final minute.
“You have the lead but then you cough it up,” said Sutter. “Then you get a power play and . . . it was my mistake to have those guys on the ice.”
The Rebels were outshot 20-10 in the opening period, yet matched the visitors at a goal apiece.
Former Red Deer defenceman Austin Strand scored his eighth goal — and seventh man-advantage tally — of the season at 6:04 off a one-timer from the left faceoff circle, and rearguard Alex Alexeyev pulled the Rebels even late in the frame when, from the top of the circle, he stepped into a long rebound and beat goaltender Liam Hughes to the far corner.
Hagel potted a go-ahead goal — his sixth of the season and team-leading 20th point — at 14:30 of the second period on a deflection of a point shot by Jacob Herauf. 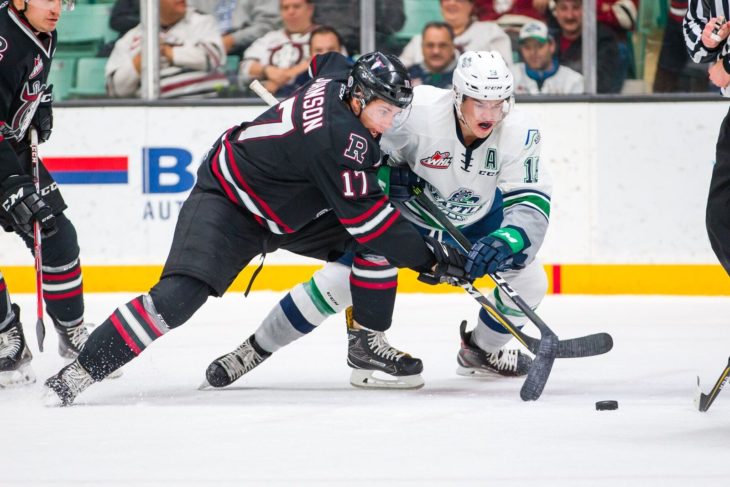 The Rebels were narrowly outshot 12-11 in the period and were arguably the better team the last half of the game, except for the fateful third-period miscues.
“It was terrible. We’ve talked about it and worked on it all year, since training camp,” said Sutter. “It you’re not intelligent with the puck and don’t play the right way, you’re going to give up turnovers and you’re going to have scoring chances go against you.
“Look at the last two goals (Seattle’s second and third markers) . . . terrible.”
Sutter liked the forward line of Jack Flaman, Jared Dmytriw and Chris Douglas and was OK with the play of defenceman Carson Sass. But he wasn’t thrilled with the performance of Alexeyev and blueline partner Brandon Schuldhaus, and several of his more experienced up-front players.
“Kids are kids, but those are your older players you’re talking about, our so-called best players,” he said. “When they’re that bad it makes it tough.”
Anders was the Rebels’ top performer, earning third-star status with a 35-save outing.
“They (T-Birds) had 20 shots in the first period and most of them were against those top lines. That makes it hard,” said Sutter.
Strand, meanwhile, continued with his hot start to the season with a goal and a plus-two plus-minus rating.
“It was a close game and it was good to get the win,” said the 20-year-old, who was dealt to Seattle last season for Schuldhaus.
Strand, a Calgary native, was all smiles following the contest, revelling in his first return to the Centrium since the trade.
“It was good being back here, it was pretty cool,” he said. “Even like for practice yesterday, it was pretty sweet to be back in the rink just taking it all in.
“Even pulling in the back of the building (the bus entrance) was a little bit weird, as was being on this side of the curtain (separating the Rebels’ and the visitors’ dressing room areas). Some of the fans welcomed me back and were just kind of saying hi.
“It’s nice. I had a bunch of family here and some old billets. It was cool. It was awesome to be back. I miss the city and the fans.”
Just notes: Hughes finished with 34 saves and named second star of the game. Neuls was selected as first star . . . The Rebels were zero-for-five on the power play; the Thunderbirds one-for-five . . . Red Deer departs Thursday morning for a two-game jaunt into the East Division. The Rebels take on the Regina Pats Friday and the Swift Current Broncos 24 hours later. Red Deer’s next seven games are on the road.