Troy Gillard joins Rebels as “Director of Broadcasts and Media” 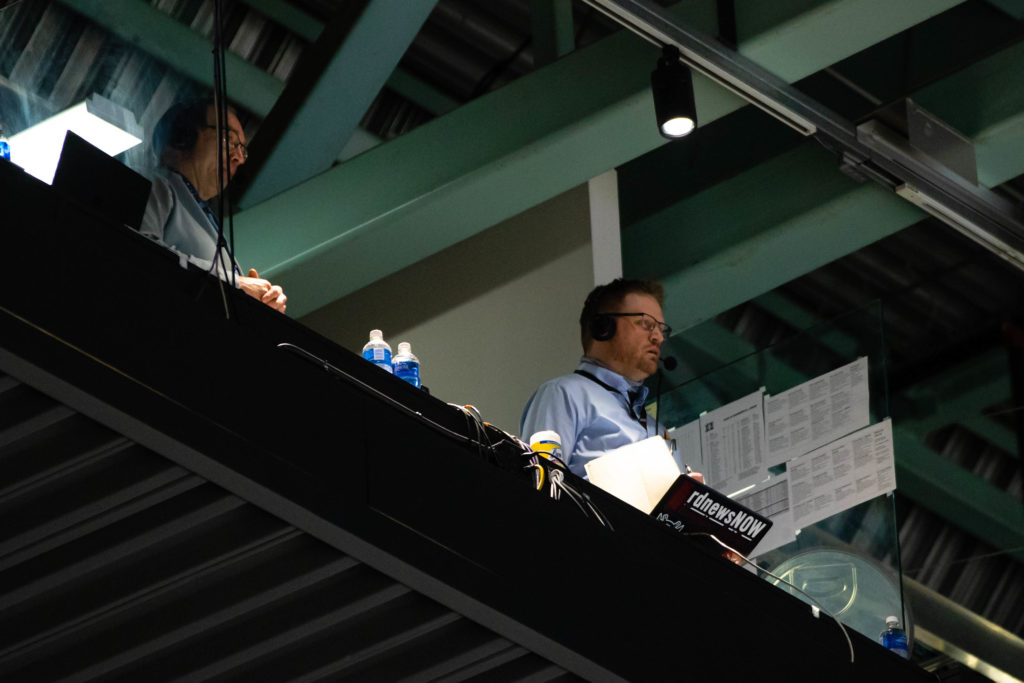 From part-time to full-time.

After filling in for the departed Cam Moon as the Red Deer Rebels play-by-play broadcaster during the pandemic-shortened WHL season, Troy Gillard was appointed as the team’s Director of Broadcasts and Media on Thursday.

“It’s still going to take awhile to sink in but as you can imagine I’m pretty excited,” said Gillard, who called all 23 Rebels games during the abbreviated season.

“Hockey play-by-play is always something I’ve wanted to do and I’ve always had my eye on a sports job something like this. It took awhile to get there but I had a few lucky bounces go my way the last couple of months.

“This is something I’ve always wanted to do and I’m thrilled to be able to do it at home and do it for the Rebels.”

Gillard is hardly a stranger to Red Deer and the Rebels, having been the news/sports director at Jim Pattison Media since 2012 and the host of the team’s broadcast for most of that time.

“Obviously the circumstances were pretty unique this past season when we brought him on board to take over for Mooner,” said Rebels Senior Vice-President Merrick Sutter. “With the changes in the schedule and just the nature of everything, he handled it really well.

“With Troy being a local guy who knows the community and someone who’s been on our broadcast for a long time, he just fits. It’s the right thing to do. He’s really excited and I think he’s looking to fine tune and grow his craft and that’s awesome.”

With his past experience at radio stations 106.7 Rewind and Big 105 as well as RDNEWSNOW, Gillard’s transition into the other aspects of his new role, which include communications, public relations and digital media, should be smooth.

“There’s the play by play side and other stuff the job entails like social media, digital media, website and communications, and he has a lot of experience in that,” said Sutter.

“Being part of the broadcast for a decade essentially and working with Mooner and learning lots about the ins and out of what goes into really a professional level hockey broadcast, that helped me out big time when I stepped in for the shortened season on an interim basis,” said Gillard.

“Being familiar with how things are done on the broadcast side is going to help me get a leg up and allow me to focus on the business side of the job, which I think is going to be a unique challenge that I’m looking forward to.”

Gillard, who previously called Allan Cup games for the Bentley General as well as for Hockey Canada (2012 Telus Cup) and Hockey Alberta (2019 Alberta Cup), said he thoroughly enjoyed being behind the mic for the 23 Rebels games alongside colour man Mike Moller.

“It was a thrill. To be the guy called on to help the Rebels through this unique season was an honour,” he said. “It took a few games to find my groove, to find my rhythm as a broadcaster, but once we got through that it got better as the season went on.

“Mike and I have worked on the same broadcast for quite a few years and he was a real big help especially early on in the season.”

Calling the games presented a different challenge with no fans in the arenas.

“You had to almost manufacture your own energy,” said Gillard. “During the course of the play you didn’t notice it as much, but when a team scored a goal it was awkward that way with the players, coaches and a handful of scouts in the building.”

Gillard fully realizes he’s replacing a virtual legend in Moon, who was hired by the Rebels in 1999 and left in January to join the Edmonton Oilers broadcast crew.

“They are big shoes to fill and nobody ever will. For 22 seasons he was the voice and the community face of the Rebels,” said Gillard. “Any time the players were out at schools or at the outdoor rinks, Mooner was there with them. That was a big part of his thing — building the Rebels brand in the community.

“I’m obviously fortunate that I’ve known him for 16 years. We did broadcasts together for 10 and I definitely learned a lot. But those are shoes you don’t look to fill, per se, rather just carry on with the fine work that he built up over two decades.”

During the abbreviated season Gillard drove his own vehicle to road games. That will change when everything is hopefully back to normal in the 2021-22 season.

“That will be one of the big adjustments for sure, the extended travel,” he said. “Getting used to the bus trips and being part of the team is something I’m looking forward to, getting to know the players more than I have the last couple of seasons.

“And getting to know (incoming head coach) Steve Konowalchuk, I’m looking forward to that.”

Gillard will officially join the Rebels organization in July

“It’s a really good fit,” said Sutter. “We’re really happy for him and thankful for Bryn James and the crew over at Jim Pattison radio for their endorsement and support for Troy making this move.

“They’re great partners and we’re happy it all worked out.”