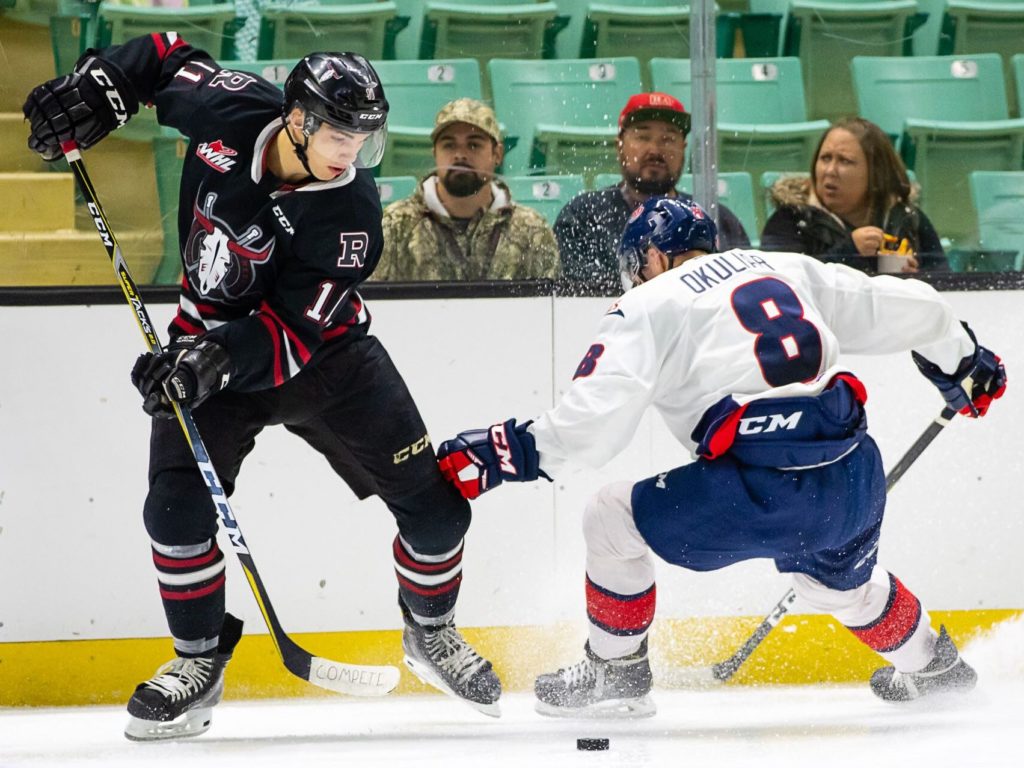 If he is indeed a top-six forward for the Red Deer Rebels during the upcoming WHL season, Josh Tarzwell may have found his linemates.

While it’s still early in the preseason, Tarzwell meshed nicely with veterans Brett Davis and Cam Hausinger Friday night at the Centrium, scoring twice and adding an assist in a 3-2 win over the Lethbridge Hurricanes.

“Not at all,” said Tarzwell, when it was suggested that he wouldn’t mind sticking with the pair of 20-year-olds when the season starts for real in two weeks time. “It’s awesome playing with guys that are older. They’ve been in the league awhile so it makes it easier.

“It’s nice to get (the two goals) and hopefully that can translate into the regular season at some point. We’ll see what Brent (GM/head coach Sutter) has in store. I’m sure he has a lot of things going on but it would be awesome to stay with them for sure.”

The Rebels carried the play early in Friday’s outing but the visitors were first on the board courtesy of Rylan Thiessen’s point shot that deflected off a Red Deer skate and past goaltender Ethan Anders.

Tarzwell pulled Red Deer even before the first period expired, shifting to his backhand and converting a two-on-one feed from Hausinger.

With the hosts on the power play early in the middle frame, Davis, from the right circle, buried a nifty pass from Tarzwell, but the ‘Canes responded shortly after with Alex Thacker connecting from the low slot.

Tarzwell notched the winner during a Rebels power play near the midway point of the final stanza, chipping the puck home from the edge of the crease.

The contest was both high tempo and somewhat scrambly.

“I thought the game was fast paced. There were times it was sloppy, but I liked the energy, I liked the work ethic,” said Sutter. “The kids competed. There were some young guys who stood out more than others but the other guys, as the game went on they seemed to settle in.”

The Hausinger-Davis-Tarzwell line was settled in from the get-go, combining for six points through the evening. Tarzwell, 19, could be a big key to the unit if he can find a consistent scoring touch this season. 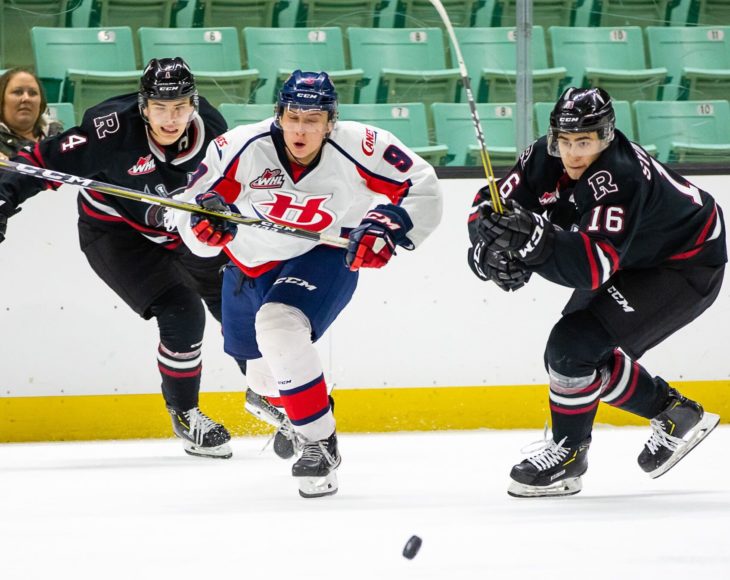 “The big thing with Tarz is skating. He has such a great shot, he has to skate and move his feet,” said Sutter.

“He’s strong, strong like a bull. Tonight he was in the right place at the right time and he was moving his feet. Tarz is a straight line player. When he plays that way and stays within the confines of his game he’s a very good player, and when he gets away from that it affects him.”

“We just thought we’d put him with a little more skill and some experienced guys,” said Sutter. “We need him to be a good player for us this year. His consistency level has to be up there all the time and he has to keep his focus where he is as a player.

“Some of that comes with maturity. We talked to him about what his game needs to be and tonight was just a sample of what we want to see out of him.”

The Rebels dressed 10 rookies while the Hurricanes also went with a young lineup.

“You have two teams that are almost going to be identical. Both teams are going to have to play young guys this season,” said Sutter.

“But for us there was a big difference between tonight and the game in Edmonton (a 5-2 exhibition loss Tuesday). We got some experienced players in the lineup and that helped the young guys out. They weren’t chasing the game like they were in Edmonton.”

Bryan Thomson was the Hurricanes’ best player with a 30-save performance. Anders stopped 13 of 15 shots before being replaced midway through the game by Eric Ward, who blocked all 13 shots he faced.

“I thought both of our goalies were good,” said Sutter.

The Rebels will face the Hurricanes in a preseason rematch Saturday in Lethbridge.