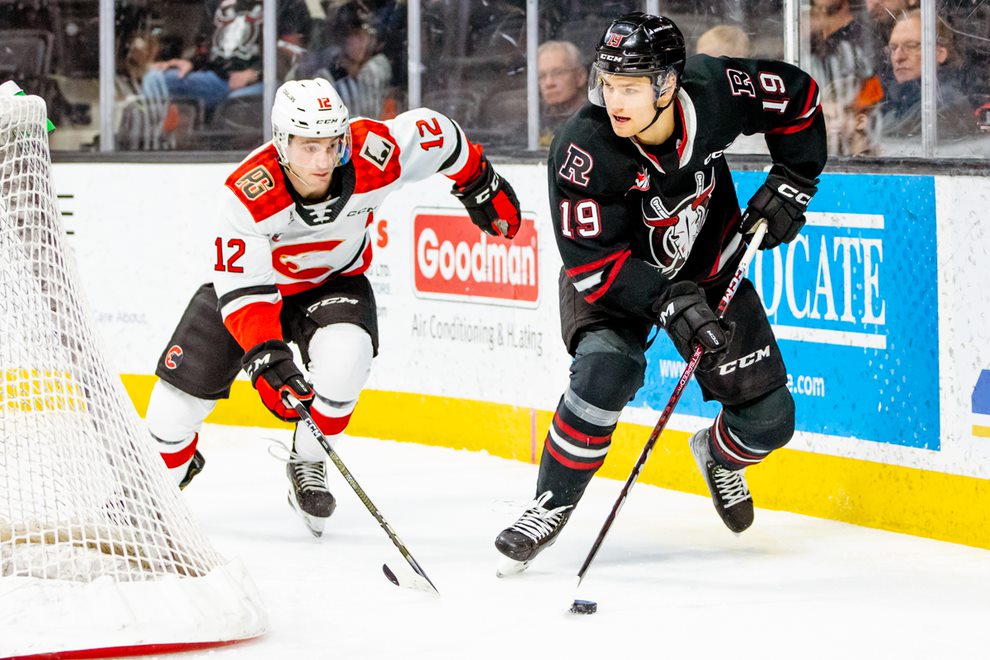 The storylines were plentiful on Friday.

Kai Uchacz turned in a five-point performance for the Red Deer Rebels, the team’s power play was deadly, and the coup de grace — Ben King scored in his first game back since suffering a high ankle sprain in October, an injury that required surgery.

In addition, there were some wild momentum swings in Red Deer’s 8-5 WHL win over the Prince George Cougars before 3,513 fans at the Peavey Mart Centrium.

“I felt better than I expected,” said the overage sniper and Anaheim Ducks prospect. “My legs were good, I got them under me early and then I just kind of tried to play my game, play as hard as I could and just kind of keep up with the team.

“I thought we played good . . . a few lapses there in the second, but overall I though we played a strong game.”

As for the switches in momentum, the Rebels watched a 3-0 lead after 20 minutes turn into a 4-3 deficit in the second period before tying the game on a late power play slap shot by Christoffer Sedoff and then outscoring their hosts 4-1 in the final frame.

“I think the fans would have fun watching that one, but it was a little hard for the coaches I think,” said Rebels bench boss Steve Konowalchuk.

“ But overall I’m happy with our guys. They played a real good first period and regrouped in the third.”

The Rebels owned the visitors in the opening frame, notching three unanswered goals —  three beauties to be precise.

Kalan Lind completed a nifty passing play that involved Frantisek Formanek and Uchacz at the 14:37 mark, and Uchacz scored his 35th of the season three minutes later, stealing the puck off Cougars defender Villam Kmec, cutting wide and ringing a shot off the far post and past netminder Ty Young.

A final-minute power play paid off when Mats Lindgren moved down into the low slot and put the finishing touches on a tic-tac-toe play with Uchacz and Sedoff.

But the tables turned in the middle stanza and it was a fluke goal that started the Cougars’ rally. With Prince George about to be penalized in the first minute of the period, a Rebels player fired the puck back to the blueline, but it skipped past the point man and down the ice and into an open net after goalie Kyle Kelsey had gone to the bench during the delayed call.

The own goal was credited to Kmec, and was the first of four straight by the visitors.

Ondrej Becker scored on a one-timer at 8:58, Jaxsen Wiebe went bar down from the right circle at 11:14 and Koehn Ziemmer connected on the power play just over three minutes later.

Then, after Sedoff potted the equalizer late in the period, the Rebels regained the momentum in the third. 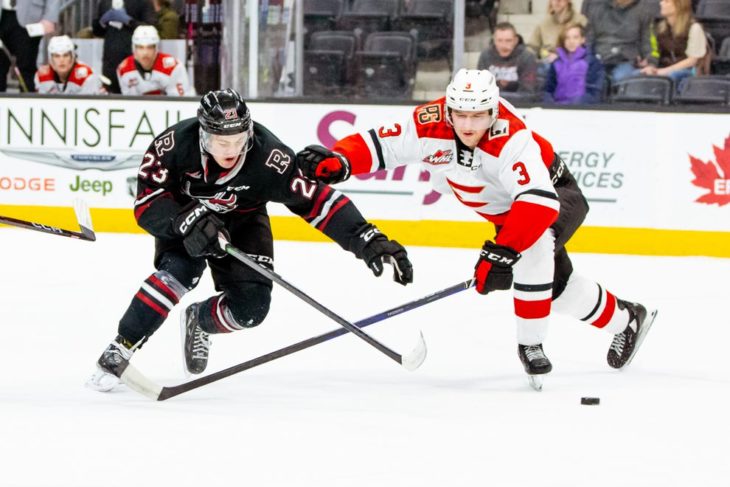 “Give their group credit in the second, they pushed back,” said Konowalchuk. “They have a real good power play as they showed today, you don’t want to give that team power play chances and that hurt us in the second.

“But we got back it and did a good job of controlling our emotions. You have to stay out of the box and I think that was a big part of the third period.”

Uchacz opened a wild final frame with his 36th of the season on a one-timer to the short side, and Lindgren potted his second of the night nearly four minutes later, cashing a rebound during a Red Deer power play.

King then sniped his sixth of the season — in as many games — again on the power play, his rising shot from the top of the left circle beating Young.

“You always think about it . . . get it out of the way in the first (game) so we can move on and I can just keep doing what I can to help the team win every night,” said last season’s WHL leading triggerman with 52 tallies.

“He’s a dangerous shooter, he had some different looks before that,” said Konowalchuk. “For the amount of time he missed he played a good game for us.

“I thought his game got stronger as the game went on. That’s a lot of time he missed and you could tell he put the work in. You can’t simulate games (in practice) but overall he played a good game.”

“That’s the longest I’ve been out with an injury in my career,” he said. “Obviously no one wants that. It was a long time watching and it’s definitely hard mentally to stay in it when you want to get out there. It was a long time but it was well worth it. I’m back now and I couldn’t be more happy.”

Ziemmer scored his second of the night to get the Cougars back to within two goals, snapping home a rebound with 4:38 to play, but Rebels captain Jayden Grubbe cashed a rebound a minute later after Hunter Mayo rang a shot off the post.

Uchacz, skating alongside Lind and Formanek, had a monster game with two goals and three helpers.

“He skated with the puck, looked confident shooting and played a good all round game,” said Konowalchuk. “That line, especially in the first period, was passing the puck around and making good plays. They had some chemistry.

Kelsey, out for a lengthy stretch with a lower body injury, made his first start in the Rebels net since Dec. 17 and finished with 22 saves.

“That’s not a lot different than King,” said Konowalchuk of the goaltender’s return to action. “It’s hard for goalies to have traffic in front of you in your first game (back), going against some good shooters.

“It was a tough challenge for him but he did well and played a solid game.”

Notable: Young made 34 saves . . . The Cougars were one-for-five on the power play . . . The three stars: (1) Uchacz, (2) Lindgren, who had an assist to go with his two markers, and (3) Ziemmer . . . Grubbe had a four point night (1g,3a), while Sedoff (1-2) and Lind (1-1) also had a multi-point game . . . Prior to the contest, Matteo Fabrizi was presented with the Rebels Telus scholastic player of the month award for January . . . The Rebels host the Brandon Wheat Kings Saturday and visit the Calgary Hitmen Sunday. Brandon beat Calgary 4-2 Friday.