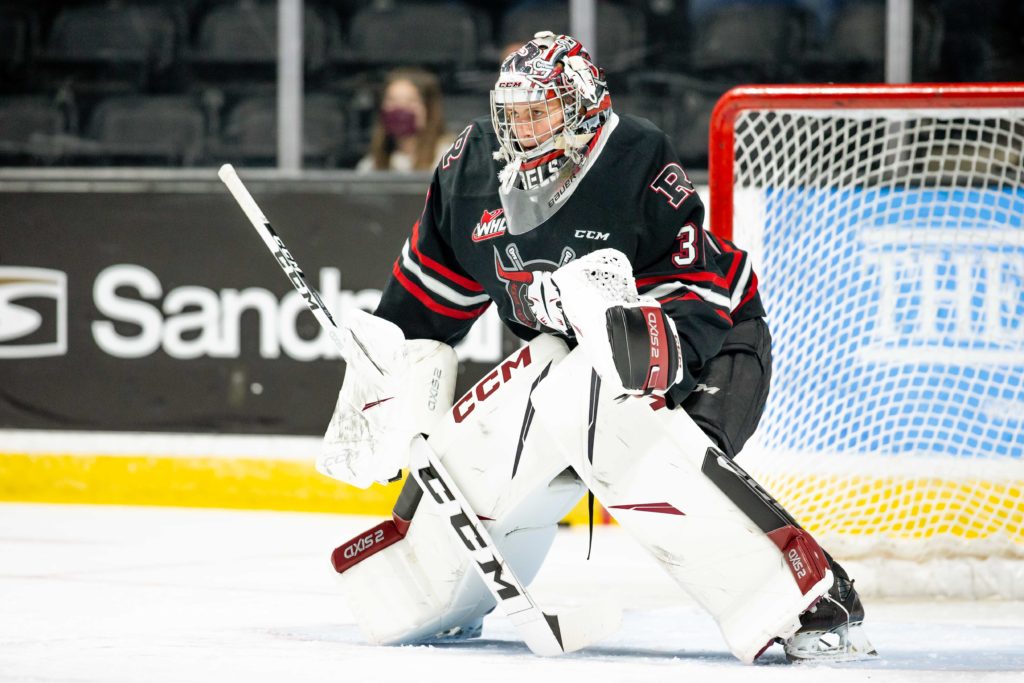 Six current members of the Red Deer Rebels are taking part in development camps with various NHL clubs this week.

Coward finished first among WHL rookie goaltenders in 2021-22 in goals against average (2.51) and wins (22), second in save percentage (.906), and fifth in shutouts (2). The Swift Current, SK native posted a 22-10-0-2 record in 35 appearances. He was outstanding in 10 playoff games, posting a 2.24 goals against average, .925 save percentage, one shutout and four wins. The 19-year-old, who joined the Rebels as a list player in November 2019, has been invited to Canada’s National Junior Team summer camp in Calgary later this month.

The Rebels’ captain was selected by the Rangers with the first pick in round three of the 2021 NHL Draft. After recovering from a devastating knee injury suffered during the abbreviated 2021 season, the Calgary native found his form midseason and was a force for the Rebels down the stretch in 2021-22 and into the playoffs. After recording 35 points in 68 regular season games, Grubbe netted four points in 10 postseason games, including the triple overtime game winning goal in game six of round one versus the Brandon Wheat Kings.

King was selected in round four, 107th overall by Anaheim at last week’s NHL Draft. The Vernon, BC native is coming off a career year with the Rebels in which he led the Western Hockey League with 52 goals. His 105 points placed him second in the entire league behind only his linemate, Arshdeep Bains. He also led the league with 24 power play goals and 15 game winners, tied for second-best in WHL history and just one back of the single-season record. King was named to the Central Division First All-Star Team and as Central Division Player of the Year. King is ninth in Rebels team history with 80 career goals.

Masters was selected by Minnesota in round four of the 2021 NHL Draft. The Edmonton native was a mainstay in the Rebels’ top four along the blue line, finishing with 14 points in the regular season and a +24 rating, second among the team’s blue liners. The Rebels selected Masters in the first round of the 2018 WHL Prospects Draft.

The Helsinki, Finland native was superb along the blue line for the Rebels in 2021-22. After playing in his home country last year, Sedoff returned to play 65 regular season games, posting 61 points (7 G, 54 A) which was third most on the team. He led the WHL with 32 power play assists during the regular season. Sedoff was the Rebels Defenceman of the Year in 2021-22 and named to the Central Division First All-Star Team. Sedoff was selected by the Rebels in the first round, 25th overall at the 2019 CHL Import Draft

The team’s Rookie of the Year for 2021-22, Weir was ranked 56th among North American skaters by NHL Central Scouting. A native of Coldstream, BC, the 6’2 blue liner who turned 18 in May posted 25 points (5 G, 20 A) during the regular season and two assists in 10 playoff games. He also played 23 games with the Rebels during the pandemic-shortened 2020-21 season. Weir was selected by the Rebels in round two, 38th overall at the 2019 WHL Prospects Draft.

Two other members of the Red Deer Rebels during the 2021-22 season, Arshdeep Bains and Jackson van de Leest, are attending camp with the Vancouver Canucks.