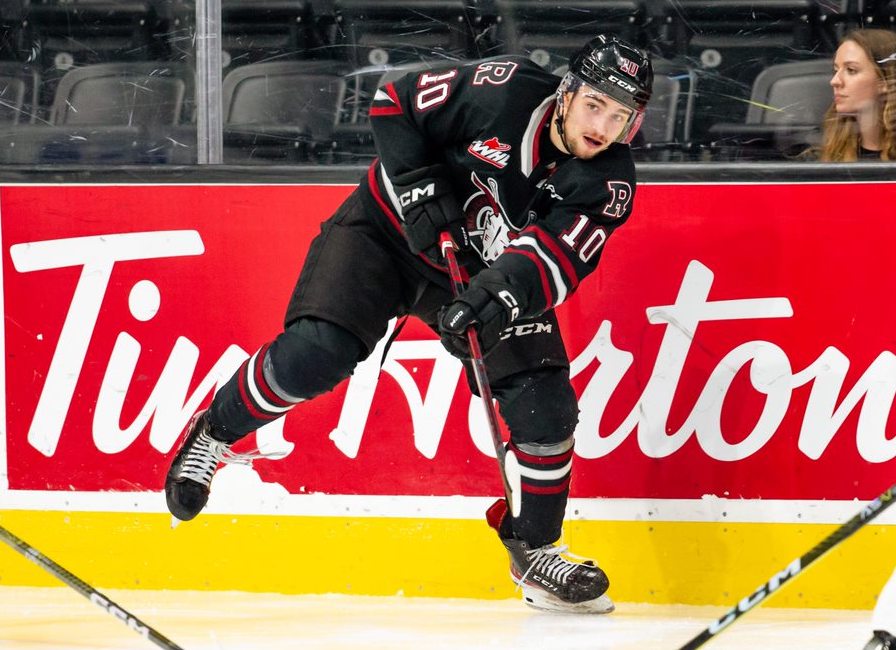 Rebels second-year forward Frantisek Formanek had the usual challenges a European player experiences when he brings his talents to the Western Hockey League — learning to speak English and adapting to a different culture.

Formanek was no exception in that regard, however, unlike many imports who have difficulty adjusting to the physical style of play in the WHL, the 18-year-old forward from Czechia was right at home with the grind.

“It was like different from Czech because it was like smaller ice,” he said Thursday of his early games with the Rebels after joining the team in January.

“In my league (in Czechia) there are no fights. When I come here there was like three of four fights in a game, so it was for me a new thing.

“But I think I like it now, it’s better for me. It’s my type of game, play hard. So I think I find the type of hockey I like.”

At 189 pounds, Formanek packs power on his five-foot-10 frame.

“He plays hard and he’s got good speed,” said Rebels assistant coach Ryan Colville. “We’ve seen in practice a lot his ability to make cutbacks. He’s a powerful guy although he’s not that tall.

“He’s just a strong guy and over the last couple of games we’ve seen him protect pucks and take pucks to the net. I think he’s a hard player to play against.”

Formanek barely understood or spoke a word of English when he arrived in Red Deer 11 months ago, roughly six months after being selected 14th overall in the CHL import draft.

Just under a year later, he’s capable of comfortably conversing in his adopted language.

“The last year was hard because everything was new to me,” he said. “I never speak so much English.

Still, Formanek prefers to do his talking on the ice with his aggressive style and offensive capabilities.

The right winger, who has represented his country internationally in three age classes, scored three goals and collected nine points in 33 regular-season games in 2021-22 and added a goal and two assists in 10 playoff games.

Now well into his sophomore season, he has contributed five goals and 12 points — while racking up 43 minutes in penalties — in 25 games. 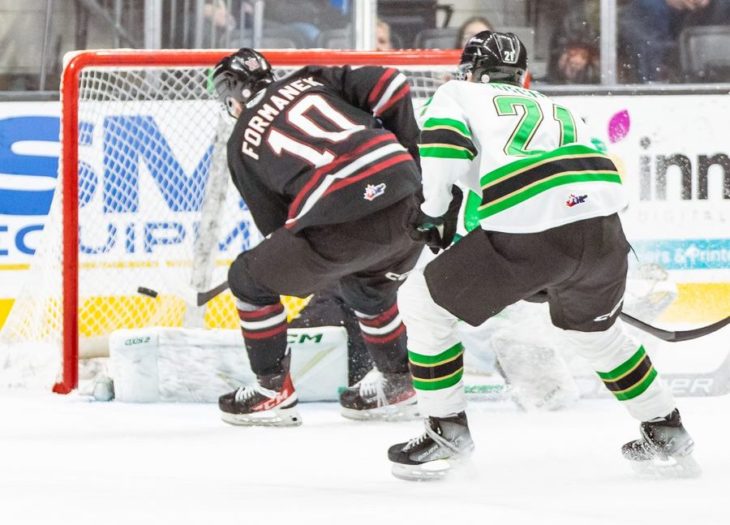 Including among his goals was a picturesque breakaway marker in last Saturday’s 6-1 win over the visiting Prince Albert Raiders in which he solved netminder Max Hildebrand with a dazzling backhand-to-forehand move.

“I can play physical but on the side I can score, play fast, make a smart play,” he said. “I can play both things.”

Colville predicts fans will see more of the same from Formanek.

“There’s some offence in there,” said the coach. “Obviously coming to us halfway through last year, there was an adjustment period for him.

“This year he’s a lot more comfortable, you can see that. “He’s also a year older so I think this year you’ll see him get better and better because he’s had a full year to get comfortable.

“As the games go on you can see him getting more and more confident.”

The Rebels are riding a two-game winning streak heading into Friday’s game versus the Saskatoon Blades at the Peavey Mart Centrium and are hoping they’re back on the right track after dropping seven of their previous eight games.

The team opened the season with 16 straight wins before hitting their recent dry spell.

“I think we had before a little bit problem, but after these last three games we went through, even with a loss in a shootout (Friday’s 3-2 setback to Medicine Hat), I think we are getting up again,” said Formanek.

“I think we will come back like at the start of the season and be winning still.”

Notable: The Blades are hot on the Rebels heels, sitting third in the Eastern Conference, just five points back of second-place Red Deer with three games in hand . . . Saskatoon has four forwards — Trevor Wong, Brandon Lisowsky, Egor Sidorov and Conner Roulette — averaging a point or more per game and a stout defence led by Aiden De la Gorgendiere and Olds native and former Red Deer bantam AAA Rebels blueliner Charlie Wright . . . The Blades also boast two of the league’s better special teams, sitting sixth overall with a power play success rate of 26.6 per cent and second in the penalty kill department (85.4 per cent). The Rebels are eighth (24.8 per cent) and fifth (83.1) respectively . . . Goaltending is another Blades strength with rookie Austin Elliott rocking a 1.82 goals-against average and .925 save percentage and Ethan Chadwick checking in with numbers of 2.01 and .919. They are one-two in the WHL GAA category — with Red Deer’s Kyle Kelsey (2.08) and Rhett Stoesser (2.26) third and fourth — and each has started 11 games. Kelsey, for the record, boasts the league’s best save percentage at .926 . . . The Rebels host the Moose Jaw Warriors Saturday.