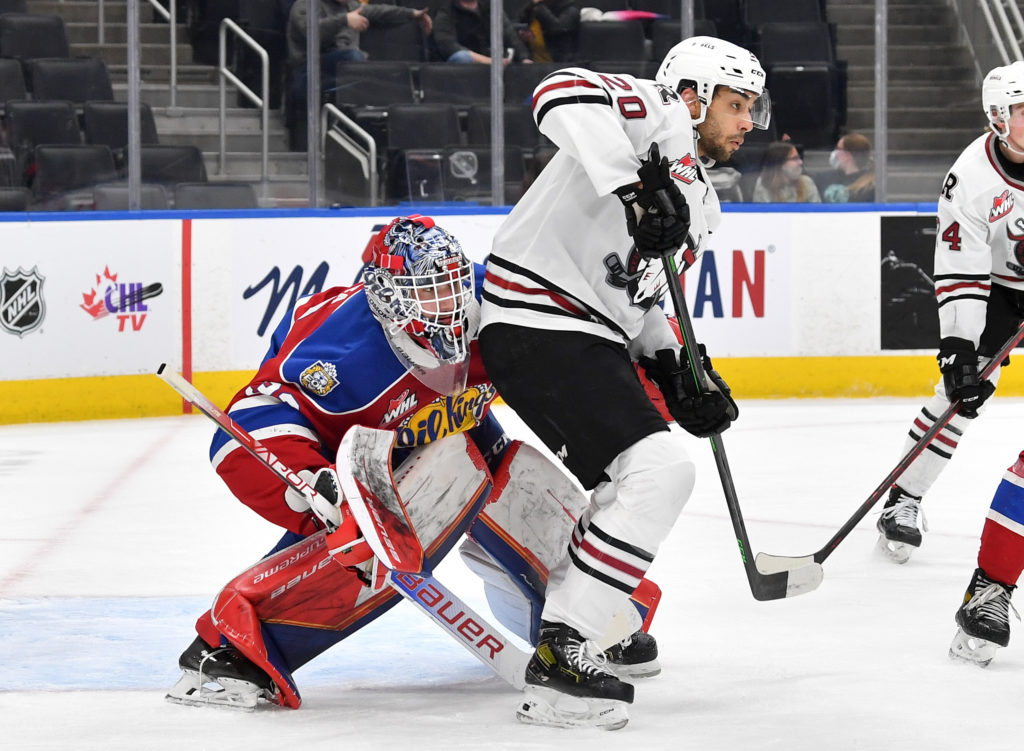 EDMONTON — The Red Deer Rebels suffered through a serious case of the second-period blues Wednesday night at Rogers Place.

The Rebels led 1-0 after one period, but surrendered four goals in the middle frame in a 5-3 WHL loss to the Edmonton Oil Kings in front of 3,065 fans.

“We had a couple of breakdowns that they capitalized on real quick. Then we were trying to play catch up,” said Rebels head coach Steve Konowalchuk.

“In other parts of the game we had some tempo and were creating some stuff, generating scoring chances.”

Kai Uchacz notched a late first-period power play goal for the visitors, tipping home a pass from Ben King in the left circle.

The Rebels’ lead lasted just 1:34 into the second period, as Carson Golder scored a short-handed marker. Jake Neighbours circled the Red Deer net and found the Oil Kings defenceman, who moved down from the point and fired a one-timer high to the glove side of goalie Chase Coward.

Dylan Guenther gave the home side a permanent lead five minutes later on a short two-on-one, beating Coward low to the stick side from close range.

Jaylen Luypen connected just 41 seconds later for a 3-1 Oil Kings lead, taking three strides over the blueline and catching the top corner of the net.

Jace Isley, with his first goal of the season, pulled the Rebels to within one with under four minutes left in the period, accepting a corner pass from Uchacz and beating netminder Sebastian Cossa to the short side from down low.

But the hosts responded in short order with Josh Williams, from the edge of the crease, tallying on the power play.

The Rebels went to the power play on four occasions and fired 20 shots at Cossa in the period, while the Oil Kings cashed in four times on 10 shots.

“It’s a team game,” said Konowalchuk “We had some breakdowns that ended up in our net, some bad breakdowns. It’s never one guy’s fault.”

Carter Anderson again reduced the deficit to a single goal 6:44 into the third period, tapping home a cross-crease feed from Christoffer Sedoff.

The Rebels had an opportunity to find the equalizer when Simon Kubicek was sent off for high sticking at the 15-minute mark, but came up empty on the power play.

Just a few seconds after the penalty expired, Luypen broke in alone following a give-and-go with Kubicek and sealed the deal with his second of the game.

The Rebels were one-for-seven on the power play on an evening they could have used at least one more man-advantage tally.

“The one you’d like to get was late in the game to tie it,” said Konowalchuk. “But we had some good looks on the power play. We had chances we didn’t capitalize on.”

Coward finished with 24 saves while Cossa turned aside 30 shots.

The Oil Kings’ win gave them a four-point lead over the second-place Rebels in the Central Division.

“We knew it would be a battle,” said Konowalchuk. “The game was there for us. It’s disappointing a bit because I still believe there’s more in us as far as everybody having their ‘A’ game.

“We had a lot of guys play a pretty good game but we had a few who weren’t at their best. When you play those kind of games we want everybody to be at their best.

“But again, there were some good things we can take away from the game and go from there.”

Notable: The Oil Kings were one-for-three with a man advantage . . . Rebels rookie defenceman Matteo Fabrizi left the game in the first period after taking a big hit behind the Red Deer net and didn’t return. He suffered a suspected upper body injury . . . The Rebels are at home for a pair of games on the weekend — Friday against the Saskatoon Blades and Saturday against the Regina Pats as part of Festival Weekend.