Coward pitches shutout as Rebels grind out win over Hitmen 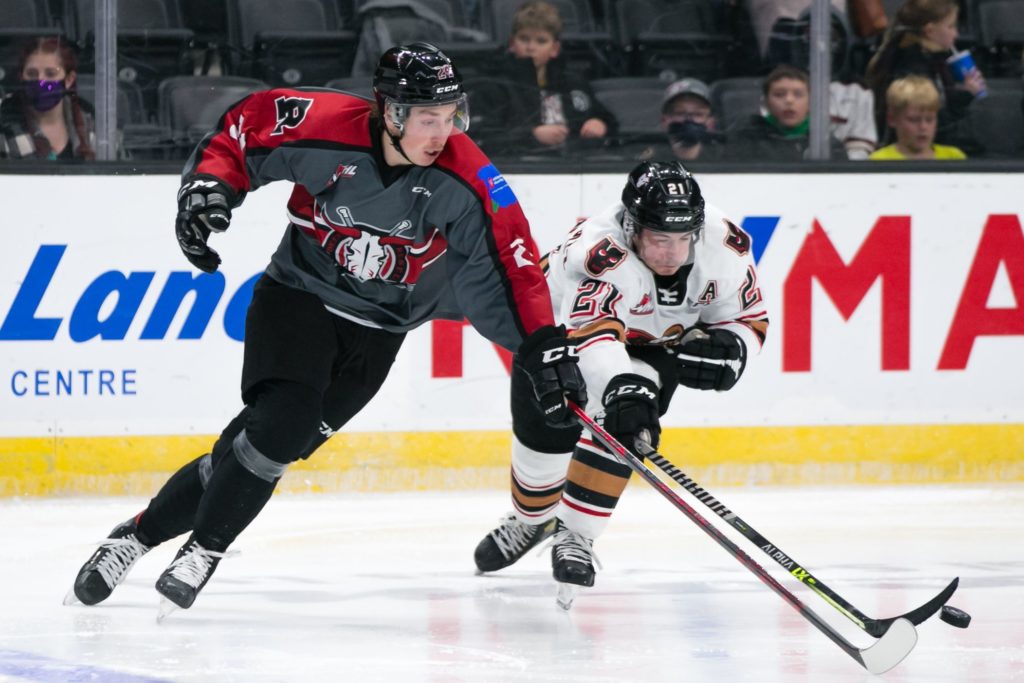 The Calgary Hitmen didn’t show the Red Deer Rebels anything they didn’t anticipate Friday night at the Peavey Mart Centrium.

The Hitmen showed up with their hard hats and work boots and stretched the Rebels to the limit before the home side pulled out a 2-0 WHL win before 3,029 fans.

“Overall it was a hard fought win. Calgary came and they played like we expected,” said Rebels head coach Steve Konowalchuk. “They play hard, they work hard, that team.You have to work for everything.”

The Rebels were the second best team through most of the opening period and in fact didn’t register their first shot on goal until just shy of the 10-minute mark. Part of that was due to the fact Red Deer was assessed two penalties inside of the first five minutes.

The visitors created chances with the man advantage but Rebels netminder Chase Coward was sharp early and, although not busy through the final two periods, also came up with some key stops down the stretch. He robbed Zac Funk on a rebound during Calgary’s second power play and finished with 22 saves for his first ever WHL shutout.

“We took some early penalties that kept some guys out of the flow,” said Konowalchuk of his team’s slow start. “It had been some time since our last game, maybe that had something to do with it.”

After being outshot 13-7 in the first period, the Rebels turned the tables on their guests and held a 27-9 advantage in shots the rest of the way, getting rewarded with the eventual winning goal when Arshdeep Bains scored on the power play during a net-front scramble at 12:32 of the middle frame.

“It was a little bit of a rusty first period but I thought as the game went on we started to get back to playing a smarter, simpler, harder game like we like to play, a faster paced game,” said Konowalchuk. “You’re not going to play 60 minutes perfect.

“Cowie was good for us when we needed him in the first with the penalty kills. He kept them off the board and let us keep our feet under us. Overall I was happy with our guys. They battled through and found a way.”

While Coward was spot on during the contest, so was Hitmen netminder Brayden Peters, who turned aside several high quality shots in a 32-save outing.

“Their guy played real good also,” said Konowalchuk. “We were getting some chances but he kept it to a one-goal game, and anything can happen at that point.

“But again, when they had a couple of chances late in the game Cowie was there.” 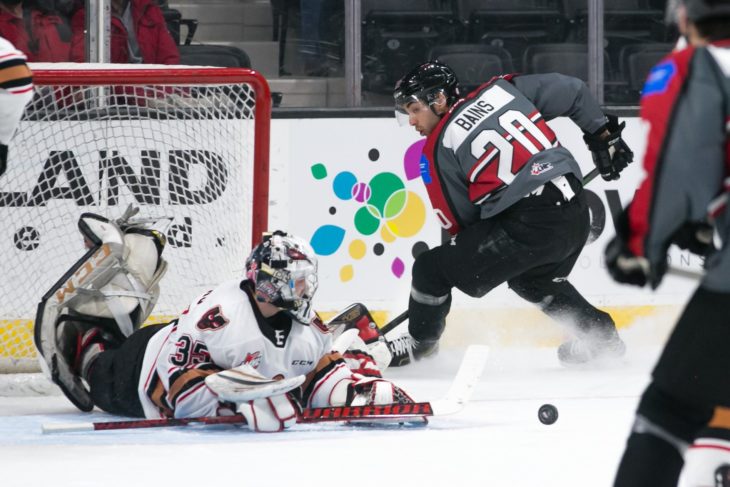 Blake Stevenson finally sealed the deal in the game’s last minute when he raced under a long flip pass from Kyle Masters, out-muscled a Hitmen defender for the puck at the Calgary blueline and scored into an empty net.

For Coward, it was his fourth straight start and fourth win in succession,  lending credence to the notion that Konowalchuk is going with the hot hand.

“We have two really good goalies who we believe in,” said the Rebels bench boss, referring also to Connor Ungar. “At this point, that’s what it is. Cowie is playing well.”

Coward’s performance reduced his goals-against average to an impressive 2.16 and boosted his save percentage to .924, another splendid number.

“Compared to last season, I’m so much more calm this year. I’m coming out of my crease more to play the puck and seeing a lot more,” he said. “I’m feeling great this year.”

He certainly looked in control Friday.

“I felt really good. It took a bit to get warmed up but I had eight shots right off the bat so that just settled me in,” said the 18-year-old.

“I’m just building off each game, taking it day by day. They (coaches) keep putting faith in me and I keep proving that I can play at this level.”

In the end, he played a key role in the Rebels’ 13th win of the season.

“We have to grind them out against Calgary, but as long as we find a way it doesn’t really matter,” he said. “You still get the two points at the end of the day.”

The Rebels return to action Saturday against the visiting Prince Albert Raiders.

Notable: The Rebels were one-for-five on the power play, the Hitmen zero-for-three . . . The three stars: (1) Coward, (2) Peters and (3) Bains . . . Stevenson assisted on Bains’ goal and finished with two points. The Calgary product has 19 points, including eight goals, in 20 games this season . . . Defenceman Christoffer Sedoff was honoured prior to the game as the Mitchell and Jewell Rebels player of the month for October.