Rebels With A Solid Effort, But Lose 3-1 In Saskatoon 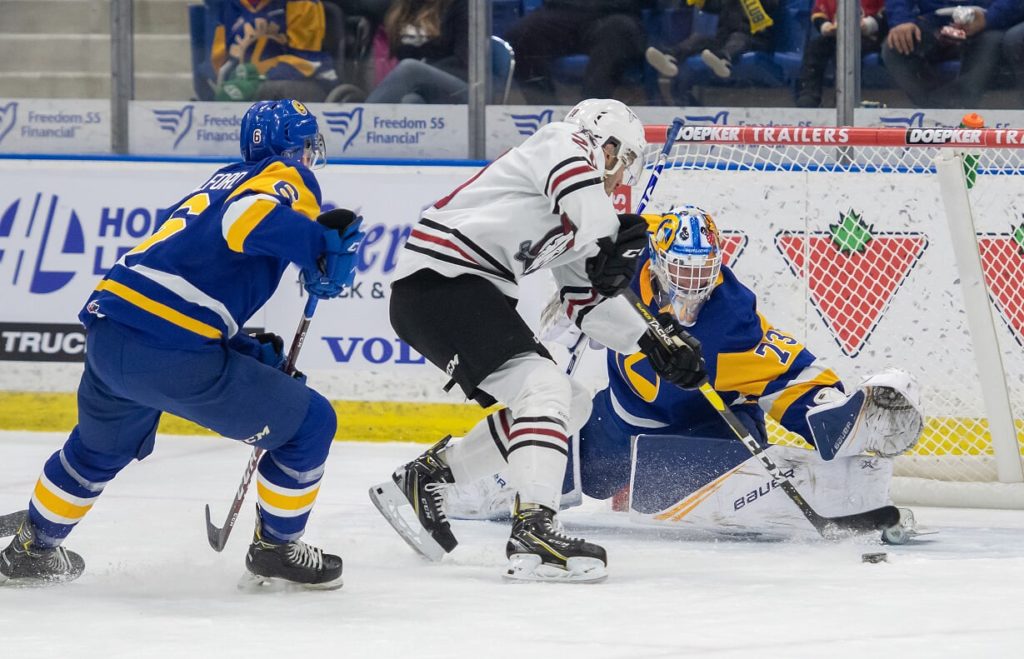 SASKATOON, SK – Despite playing their fifth game in eight days, with a lot of time spent on the bus, the Red Deer Rebels stayed right with the Saskatoon Blades Friday.

In fact they held a 29-23 edge in shots, but couldn’t find their offence which cost them in a 3-1 WHL loss to the Blades before 3,330 spectators at the SaskTel Centre.

“Outside of 10 minutes, and a couple of bad penalties, in the second period we played a very good game,” said Rebels head coach/GM Brent Sutter. “We’re not getting the goal scoring … our offence is not at the level we would like it but in other areas we’re doing some good things.”

The Rebels, who played in Winnipeg Wednesday, were strong of the gate Friday outshooting the Blades 13-7, but were tied 1-1 after 20 minutes.

Radek Kucerik scored his first goal of the season for Saskatoon at 8:03. Dallon Melin notching his second of the season to tie it at 14:39 and on the play Jace Isley picked up his first WHL point with an assist.

The Blades took advantage of a pair of power plays to score at 3:06 and 7:05 of the second period with Kyle Crnkovic and Eric Florchuk scoring their fifth and ninth goals respectively.

“We’re down 3-1 and gave up only 11 shots,” said Sutter. “It seems to be happening a lot on this road trip. We’re not giving up a lot, but it seems we’re chasing the second half.”

‘They’re a good team no doubt, but no game is easy for us, every team we play is a good team,” added Sutter, who called on Byron Fancy to start in goal for the third time in the last four games.

“Andy (Ethan Anders) needs to find his game again and while he’s doing that we might as well give the young guy more games to give him ice time and get better as well,” said Sutter.

The Rebels had a new face in their lineup in Ben King, who was picked up from the Swift Current Broncos in a four-player deal Thursday.

“It’s something we’ve been working on for about a week now,” explained Sutter. “We went back and forth and worked at it and worked at it until we got it done. It was a deal that helps both teams, which is what you’re looking for.”

The six-foot-two, 190-pound King, 17, gives Sutter something he was looking for – a big centre.

“In our perspective it was an upgrade … as we get older and stronger we needed another centre who fit in well with this group we’re trying to groom and build for the future.

“He has size and skill. He was a bit nervous tonight, but still looked solid.”

King was a first-round pick, 13th overall, by the Broncos in the 2017 Bantam Draft. He’s played 72 games in the WHL and has nine goals and 25 assists. This year he played 16 games with the Broncos and had four goals and four helpers.

The Rebels sent two 17-year-olds – Jordan Borysiuk and Cohner Saleski – and 15-year-old Parker Lalonde along with a third round pick (originally owned by Lethbridge) in the 2020 Bantam Draft to Swift Current.

Borysiuk was a third round pick (63rd) by the Rebels in the 2-017 draft while Saleski was selected in the first round (17th) in 2017 by the Prince Albert Raiders. The Rebels got Saleski Oct. 2 from the Raiders.

ICE CHIPS – Nolan Maier, who was named the game’s first star, made 28 saves for the Blades while Fancy made 20 … Kucerik was second star and Matej Toman third … The Rebels allowed two power play goals while shorthanded six times. They were zero-for-three on the power play … The Rebels finish their extended road trip Saturday in Prince Albert and return home Nov. 15 against Medicine Hat.