Rebels win second in succession on OT goal by Tarzwell 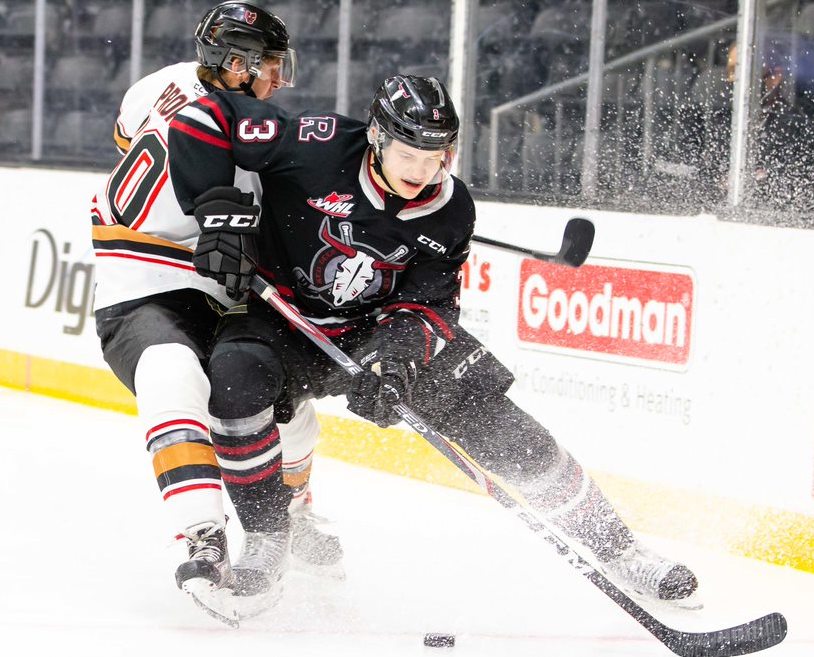 CALGARY — The Red Deer Rebels have their first winning streak of the season.

The Rebels put the brakes on a 13-game losing string by defeating the visiting Edmonton Oil Kings on Saturday and won their second game in succession less than 24 hours later with a 5-4 WHL Central Division overtime conquest of the host Calgary Hitmen.

The Hitmen carried the play through the first half of the opening period on Sunday afternoon and the pressure paid off when Sean Tschigerl took a corner pass from Riley Stotts and swept the puck past netminder Chase Coward 9:31 into the contest.

But the Rebels battled back on Kalan Lind’s third goal of the season roughly six minutes later and matched their hosts stride for stride the rest of the way, gaining even more traction in the second period.

Lind pulled the Rebels even when defenceman Kyle Masters faked a dump-in and instead fed the puck to his rookie teammate, who broke in alone from the blueline and beat goaltender Jack McNaughton.

“I thought we started a little bit slow, I thought we looked tired early on,” said Rebels assistant coach Ryan Colville. “But we got the bus legs out from under us and really turned it on in the second period and played well from there on out.”

Arshdeep Bains gave the Rebels a 2-1 lead at 4:19 of the second frame after Ben King slipped the puck over to his teammate, alone in front, through a cluster of skates.

Defenceman Tyson Galloway replied for the Hitmen just over two minutes later, going bar down on a wrister from the high slot, but Calgary forward Connor Gabruch was assessed a major penalty for a cross check on Ethan Rowland late in the period and the Rebels cashed in early in the third.

Lind pulled the trigger on the power play and Bains also notched his second of the game exactly two minutes later, burying an even-strength two-on-one chance with King to give the Rebels a two-goal cushion.

The Hitmen, however, got a goal from Zac Funk shortly after, then pulled even with a power-play tally during the second of two hooking penalties assessed to Red Deer, Adam Kydd deflecting a high point shot by Jackson van de Leest past Coward.

That goal, as it turned out, forced overtime, and the Rebels took care of business early in the extra frame with Josh Tarzwell breaking hard to the net and cashing an odd-man feed from Masters a mere 25 seconds in.

“You don’t want to run into that kind of penalty trouble but our PK was good again and helped us keep some momentum,” said Colville. “We held on at the end and it was nice to get the goal early in overtime.”

Coward made 29 saves — three more than McNaughton — while recording his second win in succession and now sports a 3.00 goals-against average and .904 save percentage in three starts.

“Their second goal he would probably want back. Other than that he was solid, he made some big saves for us,” said Colville.

The Rebels, 4-15-3-0, close out their season on Tuesday when they host the Hitmen.

Another win would go a long way towards helping the players take a positive attitude into the spring and summer after a trying 23-game season in which the team suffered through a flurry of injuries.

Colville said the players, the vast majority of whom are eligible to return next season, can already sense that better times are ahead after posting back-to-back wins.

“It will make for a better off-season and hopefully we can get off to a better start next year.”