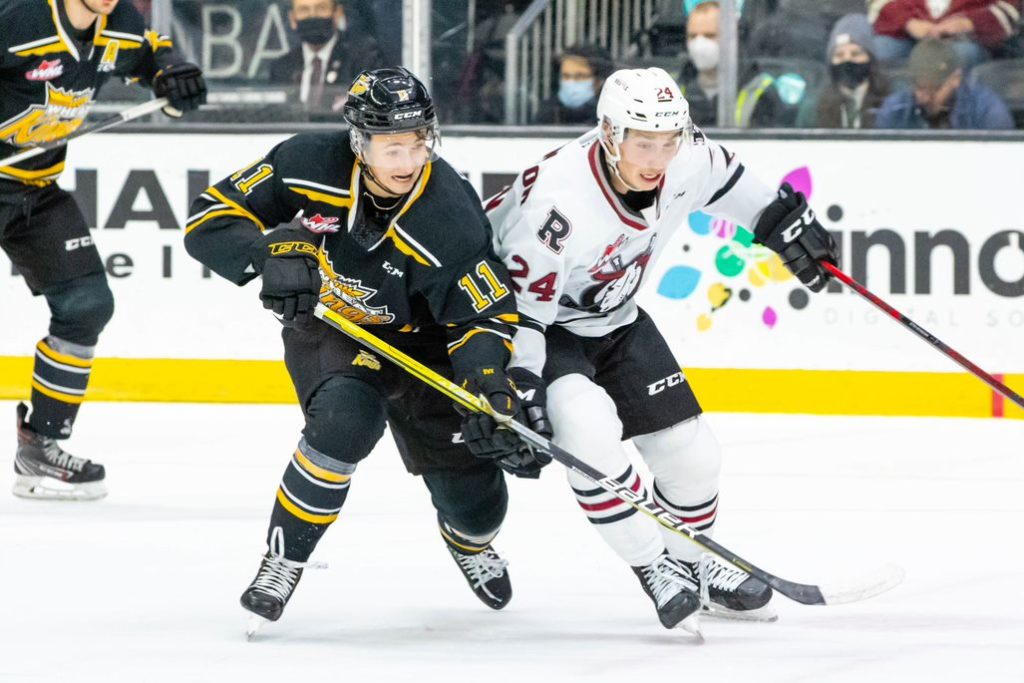 Coming off a one-sided win over the Lethbridge Hurricanes the night before that was preceded by a victory over the highly ranked Edmonton Oil Kings the previous weekend, the Rebels never missed a beat while laying a 7-1 beating on the Brandon Wheat Kings Saturday.

“Coming off a big win yesterday, the guys were able to get focused again and get their emotions in check. They came out and played with passion and energy and with a game plan.

“It was good to see and everybody was involved again. It was a team win.”

The Rebels are making a habit of building off of their most recent positive result, a trend their bench boss wants to see continue.

“You want progression and you want guys to play the same way as much as possible, whether they’re up a goal or down a goal,” said Konowalchuk. “Play it one shift at a time instead of riding the roller coaster. At the end of the day you’ll get better results and be more consistent.”

The Rebels carried the play through the first period and went into the intermission with a 1-0 lead courtesy of a power play goal by Ben King. The Rebels veteran received a rink-wide pass from Arshdeep Bains and scored from the left circle, his quick release beating netminder Nicholas Jones between his pad and glove.

The home side then blew it open with four unanswered second-period goals, the first coming from Kalan Lind on a perfect redirect of a point shot by Hunter Mayo.

Liam Keeler followed with his fourth of the season, finishing off a terrific give-and-go with Jayden Grubbe on a Red Deer power play, and Grubbe then scored a man-advantage marker of his own when he broke to the net and buried a feed from Jhett Larson.

Keeler and Grubbe, selected as the game’s first and second stars, each notched a goal and an assist, matching their respective outputs from the night before.

“They work hard and have good speed. Keeler brings good speed and tenacity and then you have Grubbe with some strength. And obviously they both have the skill to move the puck.”

The line, which also features Jace Isley, has also been effective on the other side of the puck, Konowalchuk noted. 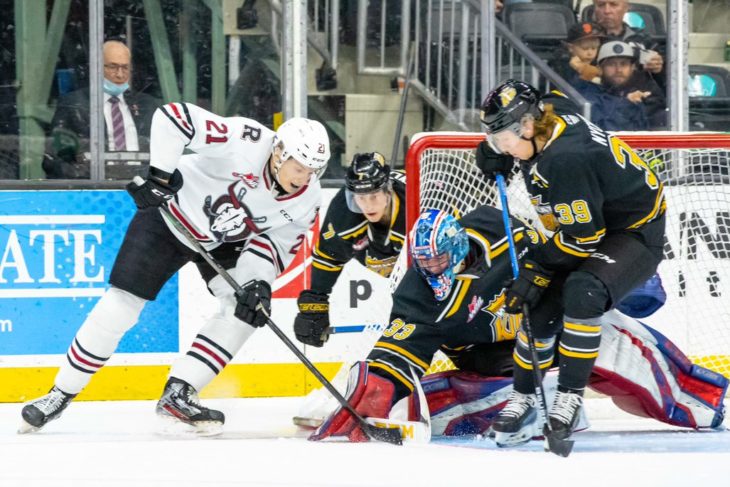 “They get tough assignments, lots of times they’re out against the other team top line,” he said. “So not only are they chipping in with some points,  but they have a tough assignment to keep the other line off the board and they’re doing a great job.”

Blake Stevenson gave the Rebels a five-goal cushion with one minute remaining in the middle frame, converting a nifty backhand pass from Kai Uchacz from behind the net.

Ethan Rowland out-raced a Brandon defender to a loose puck, broke in alone and scored on a backhand deke to make it 6-0 in the latter half of the third period, before Nolan Ritchie spoiled the shutout bid of Rebels netminder Chase Coward shortly after.

Stevenson closed out the scoring with his second of the night — and fourth of the season — two minutes later, slipping the puck through Jones’ pads from in tight.

“We’re playing for each other and that’s really important,” said Keeler, who  was acquired from the Oil Kings during the off-season.

“For me to come in here and join such a close knit group, for them to make me feel as comfortable as they have, it’s huge and makes me play with a lot of confidence.

“As a team we’re just getting more confident every single game and just hoping to build off that.”

As for the interaction he’s already built with Grubbe . . .

“He’s a talented player, he’s big and he creates space for me,” said Keeler. “I think we both skate every well. That’s really an under-rated part of his game, his ability to skate and win battles and create space for me and Issey (linemate Jace Isley).

“Issey is doing a good job too, just the way he works and pursues the puck is very important and helps our line a lot. Me and Grubber want to keep building on what we’ve done. We’re never satisfied and want to keep getting better.”

Notable: The Rebels special teams were ultra-special, going three-for-seven on the power play and six-for-six on the penalty kill . . . Coward made 21 saves while posting his third win of the season. Jones was the visitors’ best player, blocking 35 shots . . . . Lind was named third star of the game . . . The Rebels are idle until Tuesday when they welcome the undefeated Winnipeg Ice to the Centrium. The Ice improved to 9-0-0-0 Friday with a come-from-behind 5-4 win over the host Moose Jaw Warriors.