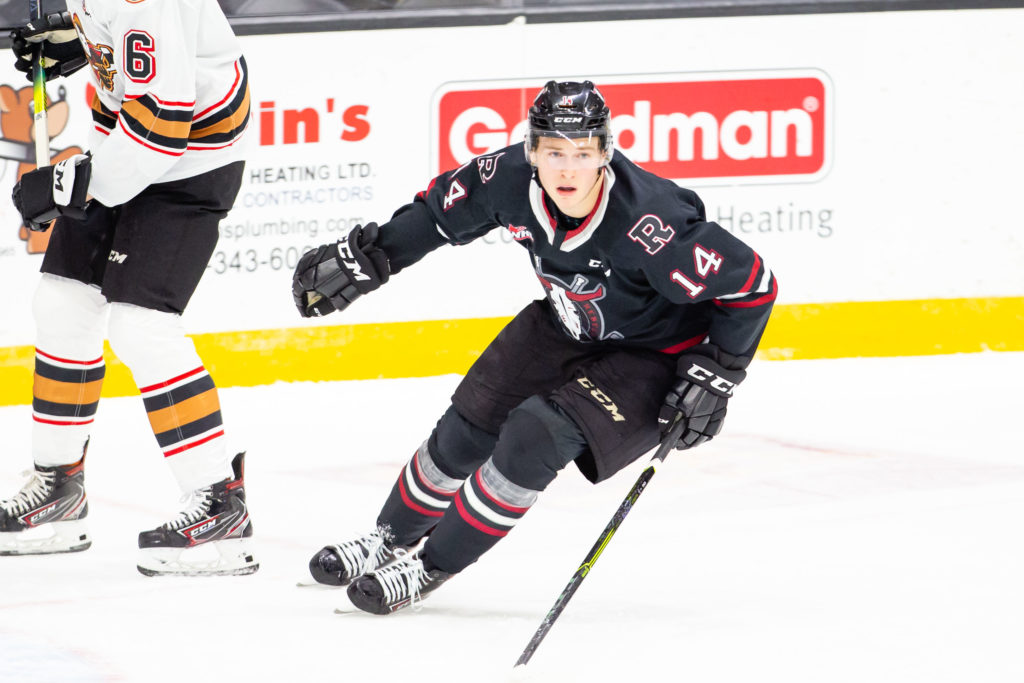 Red Deer Rebels veteran forward Ben King was surprisingly passed over in each of the last two NHL entry drafts.

But the snubs don’t mean that his dreams of one day playing at the highest level are dead.

King, along with Rebels teammate and netminder Connor Ungar, have been invited to next week’s Calgary Flames rookie camp.

“I leave on the 14th and it starts on the 15th. It’s super exciting to get that opportunity and I’m looking forward to it,” King said Tuesday, following the fourth and final scrimmage of training camp at the Peavey Mart Centrium.

“They have a lot of good players like Zary (2020 first-round pick Connor) and the goaltender, (Dustin) Wolf. So I’m excited about practising and playing with them amd getting some experience to see what it’s like. It will be a fun experience all the way around.

“You go there with all that high-end talent and get into good habits, then come back here and have a head start on everyone.”

King, a 200-pound centre who stands just over six-foot-three, was the Rebels leading scorer in the abbreviated 2020-21 WHL season with 28 points, including 12 goals, in 21 games.

The Vernon, B.C., native was acquired from the Swift Current Broncos in November of 2019 and finished with 20 goals that season.

As a 19-year-old, he’ll clearly be part of the Rebels leadership group in the upcoming season.

“I try and lead on and off the ice . . . say the words and then show it on the ice,” said King. “I try and teach the young guys what it takes to win and what it takes to be a good team. Hopefully we can follow up and be that way.”

Rebels head coach Steve Konowalchuk not only sees King as a leader and one of the Rebels’ go-to players in 2021-22, but also a potential NHL-calibre player.

“We’re definitely looking at him as obviously a leader on the team, and he’s got some good talent, he’s got professional talent, NHL talent,” said Konowalchuk. “He’s going to get a good look at that in the Flames camp.

“It will be good for him. Then he’ll want to come back and work on the little things which can be the difference between becoming a good junior scorer and becoming a complete pro.”

After being shunned in back-to-back NHL drafts, King clearly has something to prove this season and down the road.

“He does, and yet he has the talent,” Konowalchuk insisted. “The talent is there, but again, it’s just about becoming a complete player at both ends of the ice, like a pro. Finishing checks, going to the net . . . those are the kind of things that he’s going to have to do at the next level.”

Rebels training camp will conclude with the Black and White intrasquad game Wednesday at 7 p.m.

King has been impressed with the level of talent and commitment in camp.

“It’s been good. There’s a lot of good young guys and all the returning guys have come back in shape and have looked really good out there,” he said. “It’s been a good battle with some close scrimmages. It’s been fun.”

With a long list of returning players and a few new faces in the lineup, he’s optimistic about the Rebels’ chances of not only qualifying for the playoffs next spring but also contending for front-runner status.

Tuesday’s final scrimmage went right down to the wire with Team Black prevailing 5-4 on a late goal from Talon Brigley, set up by Zak Smith. Josh Medernach, on a penalty shot, Smith, Jace Isley and Arshdeep Bains also scored for the winners.

The teams split the four-game series.

Notable: Rebels forward Jayden Grubbe will leave Thursday for the New York Rangers prospects camp and defence Kyle Masters will be at next week’s Minnesota Wold camp . . . Admission for the Black and White game is a donation to the Red Deer Firefighters Children’s Charity . . . The Rebels will open their preseason schedule versus the Oil Kings Saturday in Edmonton. After hosting Calgary Sept. 17 and visiting the Hitmen the following day, Red Deer will conclude exhibition play with a home-and-home set with the Lethbridge Hurricanes — Sept. 24 on the road and Sept. 25 at the Centrium . . . Red Deer’s regular-season opener is Oct. 1 in Edmonton. The Rebels will host the Oil Kings 24 hours later.