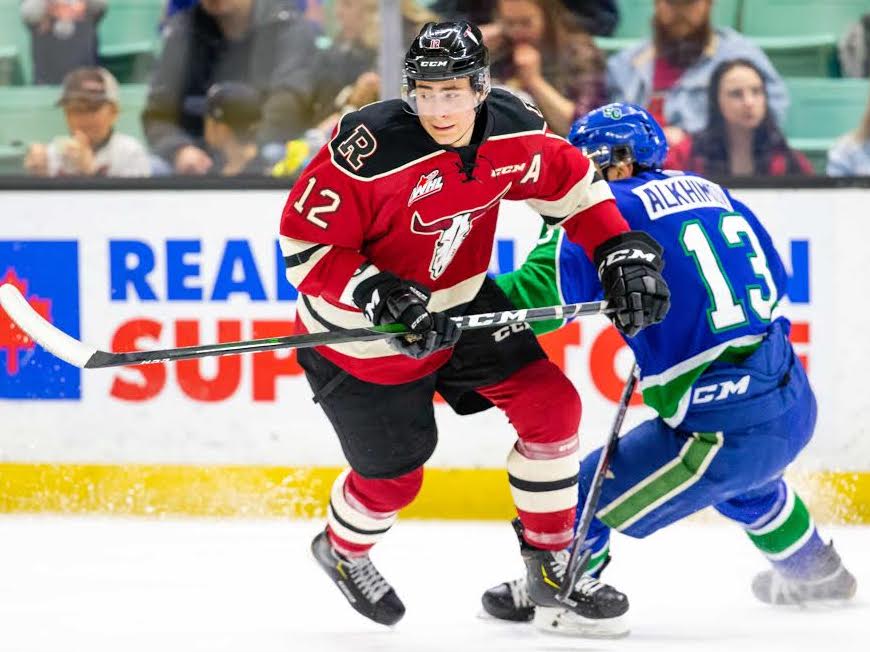 Red Deer Rebels teammates Chris Douglas and Ben King couldn’t be happier with their living arrangements as they prepare for a shortened 2021 season.

Due to the COVID-19 pandemic, the Rebels are housed in the Centrium’s private suites. Their meals are catered and they follow a daily regimen of practice, off-ice workouts and — for some of the younger players — conduct their school studies in the downstairs media lounge.

“It’s the perfect situation with everything going on . . . keeping all the players and staff as safe as possible,” said Douglas (pictured above). “Just giving the guys a chance to hang out with each other in the safe spaces here at the rink has been so good for everyone and their mental health.

“It’s the best opportunity for us to stay happy, healthy and safe.”

King has also been impressed with the setup being monitored by Rebels senior vice-president Merrick Sutter and hockey operations assistant Arie Postmus.

“It’s been unreal,” said the Vernon, B.C., native (pictured below). “I wasn’t exactly sure what to expect coming in, but they did a great job of setting up the rooms. The food is unreal and we have lots of stuff to keep us busy like ping pong tables, basketball hoops, cards.

“They’ve done an unbelievable job in giving us a home for the next few months.”

The practice sessions have been crisp and upbeat, not surprising considering the club hadn’t conducted on-ice workouts in nearly a year before re-starting late last week.

“I was lucky enough to be skating in B.C. with Arshdeep (Rebels forward Bains) during the summer. We had some good sessions going,” said Douglas, who hails from Richmond.

“But until we started practising here I hadn’t been on the ice with more than four or five guys in a really, really long time. It feels good to get some team practices in, some battle drills. To have the compete level back along with the team camaraderie . . . everything is great.”

King, who was on the ice as much as possible during the prolonged layoff, said the current living arrangements can only bring the team closer together.

“We’re together all day and pretty much all evening,” he noted. “We’re a young group and we can connect well and create bonds. And we can follow that up next season and be one of the tightest teams around . . . this year and next season too.” 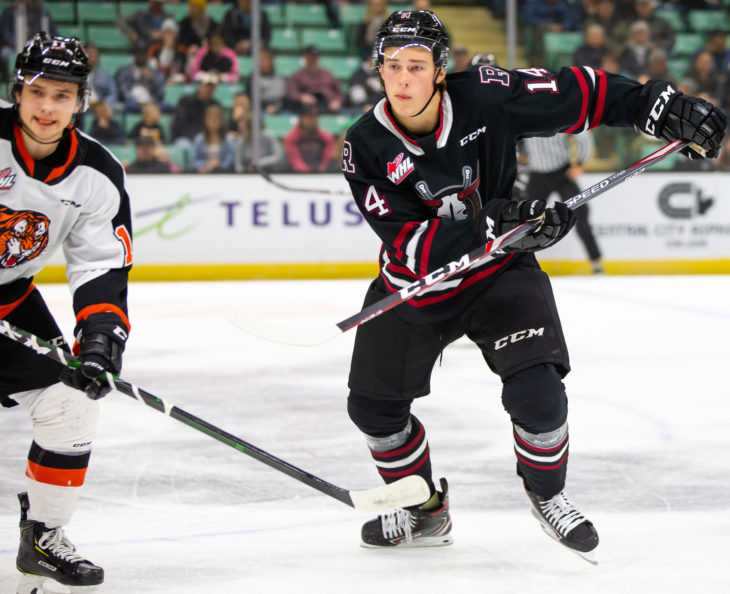 Douglas agreed with his 18-year-old teammate.

“One hundred percent. It makes us kind of like family. The old cliche is that your teammates are your brothers and in this situation we seriously are,” said Douglas. “We’re living under the same roof and we have to keep everyone together and happy.

“It’s just an unreal experience for all of us. We already had a close group last year and this is just going to bring us that much closer together.”

Both Douglas, 20, and King will be eager to put their game skills on the line when the 24-game WHL Central Division season opens next Friday at the Centrium. Douglas will play out his WHL career over the coming weeks while hoping to garner some pro interest, and King will be out to further impress NHL scouts after being passed over in the 2020 NHL entry draft.

The draft snub didn’t leave King in a bad way, he insisted.

“I think I took that in a positive manner. I kind of looked my self in the mirror and realized I have to work harder and compete more,” he said.

“At least I can show some of the scouts more of what I can do with my skills and hopefully get drafted this year. Twenty four games is a short season, but it’s better than nothing and we’re fortunate to be able to play those 24 games.”

The Rebels will host the Medicine Hat Tigers in their season opener and will pay a return visit to the southern Alberta city the following day.

The Rebels will then play a home-and-home set with the Calgary Hitmen March 5 in Calgary and March 6 at the Centrium. Both home games will start at 6 p.m.

There will be no spectators allowed in the Centrium during the 2021 season.

Stepping down as head coach in best interest of players: Sutter
16 hours ago

Brent Sutter steps down as Rebels head coach
19 hours ago