Rebels take one on the chin at Saskatoon 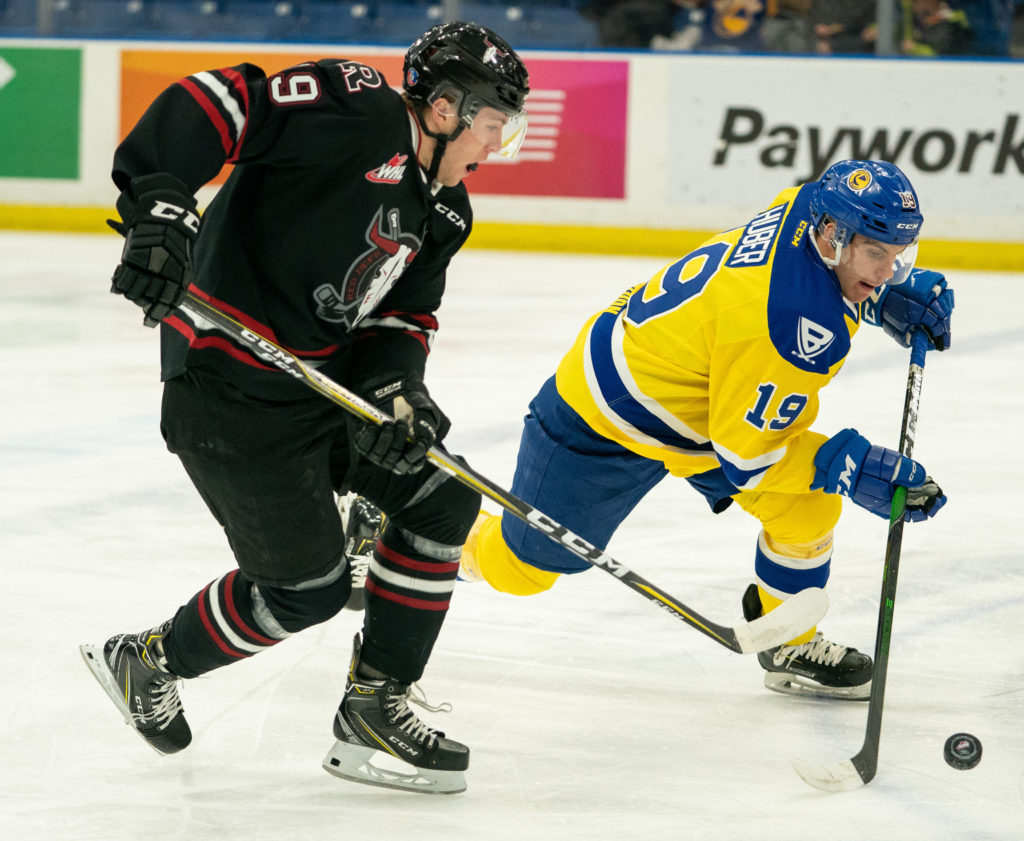 SASKATOON — The Red Deer Rebels had the majority of the shots in the first period of Wednesday’s WHL meeting with the Saskatoon Blades.

The Blades, however, had all the goals.

The host club fired three unanswered markers — including two in a 13-second span — on 11 first-period shots while Red Deer was blanked on 14 attempts.

The Rebels never recovered and in fact the game continued to go south for the visitors, who were drubbed 8-1 in front of 2,663 patrons at the SaskTel Centre.

“They got those couple quickly in the first period. From there we didn’t stick to the script and it ended up being a very long night for our group,” said Rebels assistant coach Brad Flynn.

Tristen Robins jammed a puck past Red Deer starting netminder Byron Fancy 5:40 into the contest, then scored on a one-timer from the right circle 13 seconds later, converting a feed from Kyle Crnkovik following a turnover in the Red Deer zone.

Later in the frame, Crnkovik connected on a breakaway from the Red Deer blueline following a bad line change by the visitors.

That spelled the end for Fancy, who stopped six of the nine shots he faced. Reliever Ethan Anders came up with a series of fine saves the rest of the way, but didn’t fare much better, surrendering five goals on 28 shots.

Defenceman Scott Walford extended the Blades’ lead to 4-0 at 4:18 of the middle frame, beating Anders over the shoulder from the bottom of the right circle, before Ben King buried a long rebound for the Rebels’ lone tally of the evening.

The Blades killed any momentum the Rebels may have mustered on Kings’ goal when rearguard Nolan Kneen replied less than a minute later after being set up by Robins while stationed just outside the crease.

“It seemed like whenever we made a mistake we made another one because we got away from having any type of poise,” said Flynn. “You make a mistake and then you’re in such a hurry to try and make up for that mistake, you end up making an even bigger one.”

Kneen added his second of the evening at 12:36 of the second period — beating Anders to the stick side from the left circle while on a power play— and Zach Huber and Colton Dach completed the rout with third-period man advantage goals.

Flynn liked the play of the Zak Smith-Ethan Rowland-Jaxsen Wiebe forward line (‘They played to their identity”) and was impressed with Blake Gustafson on the back end.

“Other than that we had a large group of young men who maybe read some headlines last night (following a 6-5 overtime win at Prince Albert) or just didn’t stick to the way that makes them successful, and I think they learned a very strong lesson again tonight,” said Flynn.

“But it’s January and we should have already learned that lesson against Edmonton, against Medicine Hat and against Lethbridge earlier in the year,  and that’s what makes it so frustrating,” he added, referring to preceding one-sided setbacks. “We keep learning the same lesson over and over and soon it has to come to an end if we want to improve and be a playoff team.”

Adding to the frustration is the fact the Rebels entered the game seven points back of Saskatoon for the final wild card post-season berth in the Eastern Conference. That deficit is now nine points.

“These are the games, just like the one Friday in Red Deer (a 4-3 overtime loss to Saskatoon), we don’t want to shake our heads at at the end of the year,” said Flynn.

Notable: Blades rookie netminder Koen MacInnes made 30 saves . . . The Blades were three-for-five on the power play, the Rebels zero-for-three . . . Saskatoon swept the three-star selections — (1) Robins, who had a five-point night with two goals and three assists, (2) Crnkovic (one goal, three assists) and (3) Kneen (two goals, one helper) . . . The Rebels have two games remaining on their East Division trip — Friday versus Brandon and Saturday at Winnipeg. Red Deer’s next home game is Jan. 18 against Prince Albert.