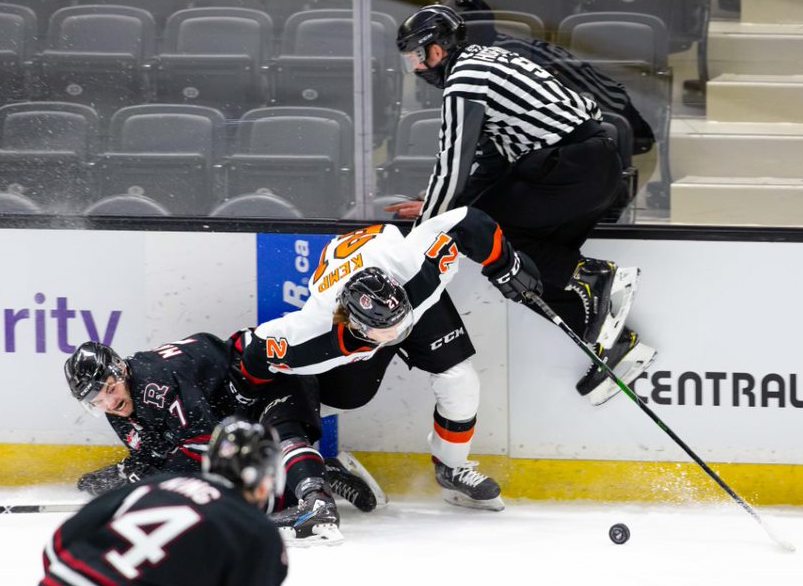 Talk about snatching defeat from the jaws of victory.

The Red Deer Rebels were in control of their WHL season opener versus the Medicine Hat Tigers Friday night at the Centrium.

The Rebels staked themselves to a 4-1 lead when veteran forward Chris Douglas jumped on a turnover at the Medicine Hat blueline and scored on a breakaway 4:36 into the third period.

But that was it for the hosts, who coughed up four straight goals — including Corson Hopwo’s hat-trick marker in overtime — and fell 5-4 in the Central Division contest.

“I thought the last 10 minutes we stopped working and moving our feet. We started getting sloppy and getting away from things we’ve been working on the last two weeks to play the game the right way,” said Rebels GM/head coach Brent Sutter.

“We started having turnovers and the game got sloppy for us. We lost our focus. I don’t know if the kids thought it was going to be easy because we were up 4-1.”

Hopwo connected from the high slot to cut the lead to 4-2 midway through the final period and the 19-year-old forward then tipped a power-play shot by Ryan Chyzowski past Rebels netminder Ethan Anders with just under two minutes remaining.

“They scored to make it 4-2 and then we took a bad penalty and they capitalized on that,” said Sutter. “You need to be smarter at that point in time. Just undisciplined is the best way to put it.”

The Tigers forced overtime when Lukas Svejkovsky scored on a six-on-five at 19:19 with netminder Garin Bjorklund on the bench, then pulled out the second point when Hopwo completed his hat trick 1:59 into the extra frame.

Hopwo appeared to back into Anders after putting the puck on net, but after a brief discussion between the on-ice officials, the goal was allowed to stand, the officials perhaps ruling that a Red Deer player carried the puck into the cage.

“In overtime we had three turnovers when we had the puck on our sticks. They ended up getting quality scoring chances and the last one went in the net,” said Sutter. “It wasn’t a good last 10 minutes of the third obviously, and we paid for it.”

The visitors opened the scoring 4:20 into the contest as Red Deer native Noah Danielson threw a corner pass out to Nick McCarry — all alone in the slot — and the third-year forward beat Anders low to the glove side.

Jayden Grubbe pulled the Rebels even just over three minutes later. Ben King played the puck down low to Grubbe during a Red Deer power play and the sophomore center moved into the crease area and tucked the puck into the far side of the net.

Ethan Rowland gobbled up a nifty feed from Keaton Sorensen and scored on a one-timer to give Red Deer the lead 1:22 into the second period, and 10 minutes later Grubbe moved the puck back to Kyle Masters and the Red Deer rearguard carried the puck down the wall and beat Bjorklund from the bottom of the circle.

Douglas’ third-period tally appeared to be a clincher, but the wheels fell off down the stretch.

“You get four straight goals scored against you . . .  we did not play the right way in our own zone and defensively in the third period,” said Douglas,

“There’s always going to be ups and downs throughout games but you can’t have that happen. It’s unacceptable really. It doesn’t matter if we hadn’t played in 350 days, it’s completely unacceptable.” 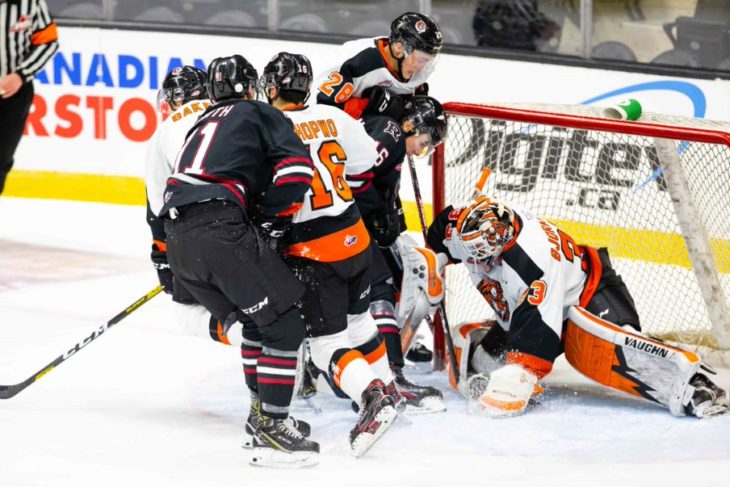 The fifth-year forward said the collapse was more than the Rebels simply taking their foot off the gas.

“We didn’t play well defensively within our Red Deer Rebels structure. We were getting too cute with the puck and not battling hard enough in our own zone finishing checks,” he said. “Once we got up three goals we got comfortable and got away from our game and they (Tigers) had us on our heels.

“That should never happen when you’re up three goals in the third period.”

On the plus side, the Rebels were the better team for 50 minutes and until the third period their power play moved the puck and created good looks, and their penalty kill was perfect.

“We did some really good things. I just thought that we were on the puck and finished checks,” said Sutter. “For the most part we were pretty good in our own zone, we were smart with the puck and played the game simple.

“Our defence is obviously very young and they just have to move pucks up the ice. For 50 minutes they were good and the last 10 minutes they tried to be pretty with the puck and caused turnovers.

“There was lots to like for 50 minutes, but the last 10 we got away from our game, stopped working and moving our feet.”

The Rebels meet the Tigers again Saturday in Medicine Hat.

Just notes: Grubbe and Masters, who drew the second assist on Grubbe’s goal, each had two points . . . Rebels defenceman Jace Weir and forward Carter Anderson made their WHL debuts as did Red Deer native and Tigers forward Ty MacKenzie . . . Selected as the game’s three stars were (1) Hopwo, (2), Grubbe and (3) Douglas . . . The Rebels were one-for-four on the power play, the Tigers one-for-five . . . Bjorklund made 29 saves, three more than Anders . . . With the exception of perhaps 20 NHL scouts and players who didn’t dress for the game, the stands were empty due to the COVID-19 pandemic. “It just means that we have to pick each up even more. There are no fans making any noise,” said Douglas. “At the end of the day it’s what happens on the ice and it didn’t feel too different. The hockey is what matters.”

Brent Sutter steps down as Rebels head coach
24 hours ago