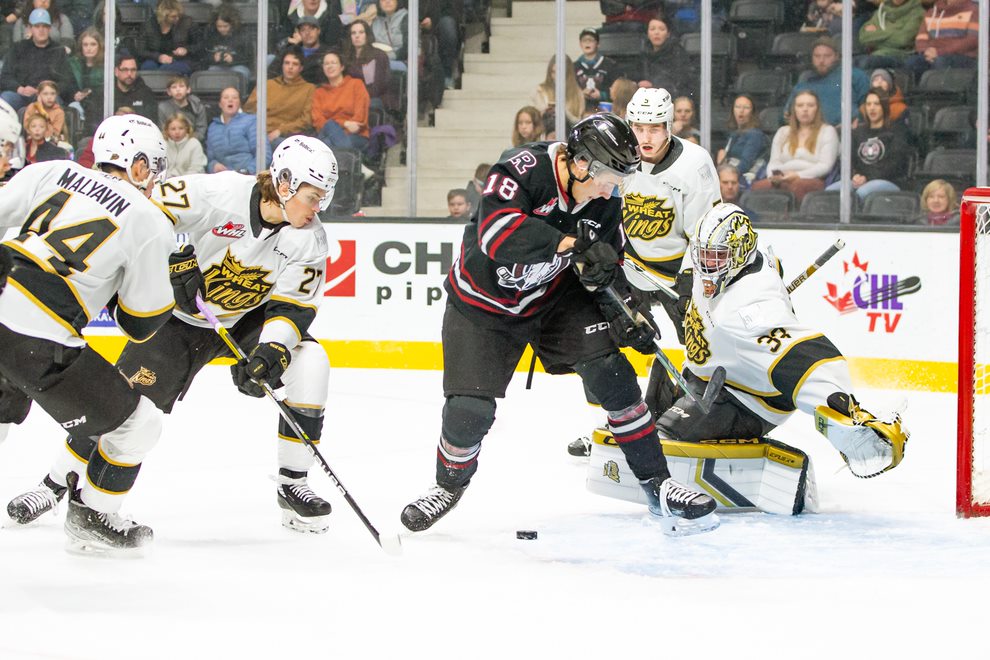 The Red Deer Rebels carried the play to the Brandon Wheat Kings on a consistent basis Saturday night at the Peavey Mart Centrium, yet came out on the short end of a 4-2 count in front of an energized crowd of 5,148.

Very few of the numbers added up to failure by the home side.

The Rebels were facing a back-up netminder in Nicholas Jones who came into the contest without a WHL win this season and sporting a 5.20 goals-against average as well as an equally unflattering .842 save percentage.

Toss in the fact the Rebels outshot their guests basically two-to-one — 42-22 — and there appeared to be no logical reason for the hosts to fall short.

But life isn’t alway fair and hockey is quite simply part of life.

“It’s a tough loss. I sure thought we did a lot of good things,” said Rebels head coach Steve Konowalchuk.

“We didn’t score enough although we had lots of O-zone time and created quality scoring chances. We moved the puck well and played within our systems. We did a lot of good things.”

The Rebels outshot the visitors 14-7 in the opening period but trailed 1-0 heading into the first intermission. The Wheat Kings got the lone goal in the final minute of the frame when Brett Hyland, from behind the Red Deer net, attempted to center the puck and it went off either goalie Rhett Stoesser or a Rebels defender and over the line.

“We were ready to play, we came out and were physical early,” said Konowalchuk. “But you have to take away from the game that there was still a couple of key moments that decided the outcome.

“As well as we were playing at times there were a few moments that played a big part in deciding the game, and that’s the frustrating part.”

Carson Birnie finally got the Rebels on the board with his fourth of the season near the midway point of the second period. Kai Uchacz directed a shot that Jones kicked out into the slot and Birnie promptly cashed the big bounce.

The Rebels took advantage of a five-on-three situation shortly after, with Jace Isley, at the bottom of the right circle, burying a return feed from Christoffer Sedoff.

But the Wheat Kings responded with a power play goal of their own before the period ended as Nolan Ritchie rung a shot off the post and behind Stoesser. 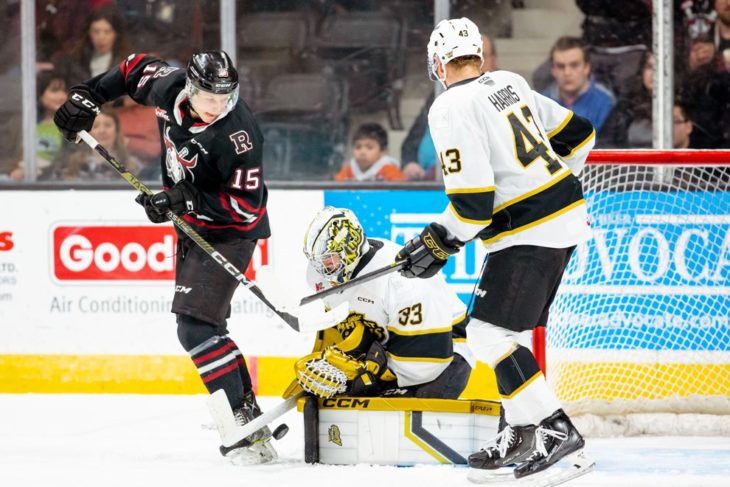 Red Deer product and Brandon star centre Nate Danielson handled the third period scoring, connecting from the low slot at the 11:29 mark after intercepting an errant Rebels pass, and then adding an empty-net marker with 76 seconds remaining.

Jones stopped Ollie Josephson on a break just after Danielson’s eventual winner and the Rebels had other opportunities in the final minutes. But nothing worked and the second-best team most of the night headed home with two points.

The loss came in the Rebels’ first home game in three weeks following nine straight contests on the road.

“I thought to finish up a long stretch of games that we skated as well tonight as we have in a lot of games lately,” said Konowalchuk. “There are positives to take away from it as well as realizing that you have to be dialled in every shift.

“We have guys who can score, it just didn’t happen this game. There were some good things and obviously some things we can improve on. It’s frustrating when we could have come away with two points, but sometimes you don’t always get the result you’d like.

The Rebels are idle until next weekend when they’ll host the Medicine Hat Tigers and Prince Albert Raiders Friday and Saturday, then head to Calgary Sunday to face the Hitmen.

“We’ll get back to work and improve,” said Konowalchuk.

Notable: Jones made 42 saves and was selected as the game’s first star. Lindgren, who assisted on Birnie’s goal, was picked as the second star, with Danielson third . . . Stoesser made 18 saves . . . The Rebels were minus the services of forward Kalan Lind, who sat out with an illness.