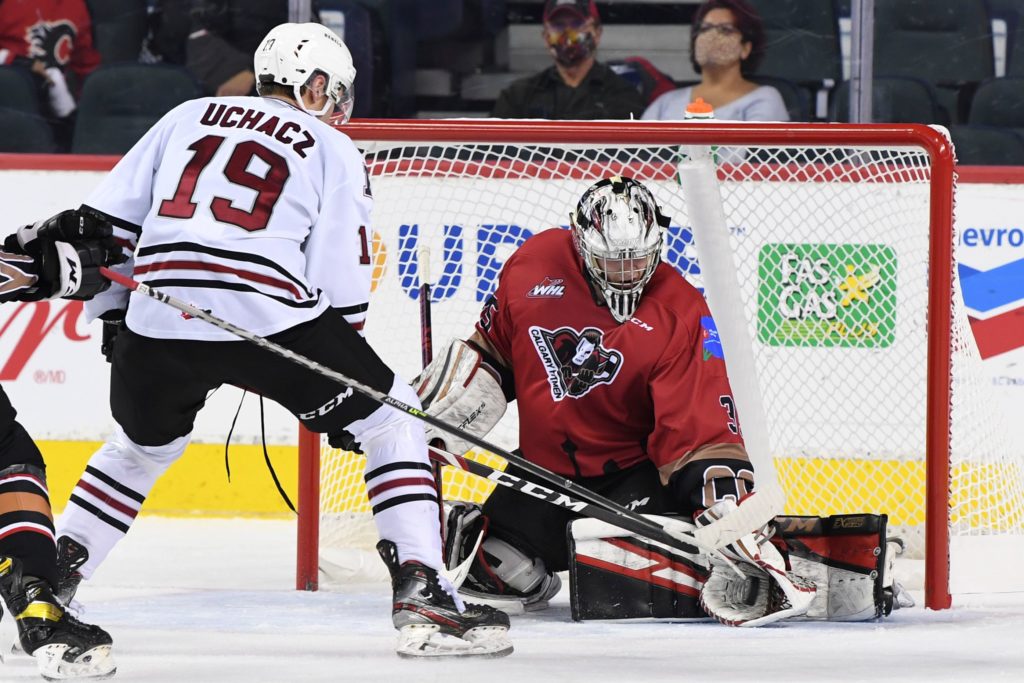 CALGARY — The Red Deer Rebels, fuelled by some impressive special teams play and an offensive outburst by their overage players, thumped the Calgary Hitmen 8-1 in a WHL mismatch Friday night at the Scotiabank Saddledome.

“I thought our special teams were key at the right times for us,” said Rebels head coach Steve Konowalchuk, whose power play was two-for-five to go with seven-for-eight on the penalty kill.

Arshdeep Bains potted his first of three goals on the evening just 1:29 into the contest when he took a rink-wide pass from Kai Uchacz and beat Hitmen netminder Brayden Peters to the glove side.

The Hitmen battled back and pulled even on a power-play marker from Sean Tschigerl at the midway point of the period, his one-timer from the middle slot sailing past the glove of Rebels goalie Connor Ungar.

Bains restored Red Deer’s lead with 3:30 left in the first when he cashed a feed from Ben King, who had driven down the right side and passed in front.

And then, to completely quell whatever steam the Hitmen had generated in the period, Uchacz tipped in a point shot by Christoffer Sedoff with Red Deer on the power play.

“We had a good start and then they had a pretty good push in the first period,” said Konowalchuk. “We had to defend a bit in our end and I thought we did a good job of that. We were breaking up some plays when they were trying to get the puck to the net, then eventually we got our game going better.

“We got our legs under us and got a couple of key goals as well.”

The Rebels put the game away with four second-period goals.

Blake Stevenson hauled in a long relay from Matteo Fabrizi to set up a two-on-one break, but instead of passing he stopped in the lower left circle and beat Peters on the short side 3:22 into the middle frame.

Bains then completed his hat trick with a quick release from the right circle, Liam Keeler cut around a Calgary defender and slid the puck past Peters just a few minutes after being denied on a breakaway, and Sedoff potted his first of the season on a tic-tac-toe two-on-one passing play with Jayden Grubbe.

Grubbe also assisted on the only third-period goal, Keeler’s second of the game and the season on a two-on-one break.

“We were able to capitalize on the power play in the first period, which was nice,” said Konowalchuk. “And in the second period the other team had some power plays but we got some good saves and some good penalty kills.”

Ungar stopped 32 shots to post his first win of the season. Peters turned aside 20 of 27 shots before being replaced by Alex Garrett, who made seven saves on eight shots in the third period.

“He was good,” Konowalchuk said of Ungar. “He made some timely saves and some big saves.”

The teams meet again Saturday afternoon at the Peavey Mart Centrium. The 1 p.m. game will be televised by CBC.