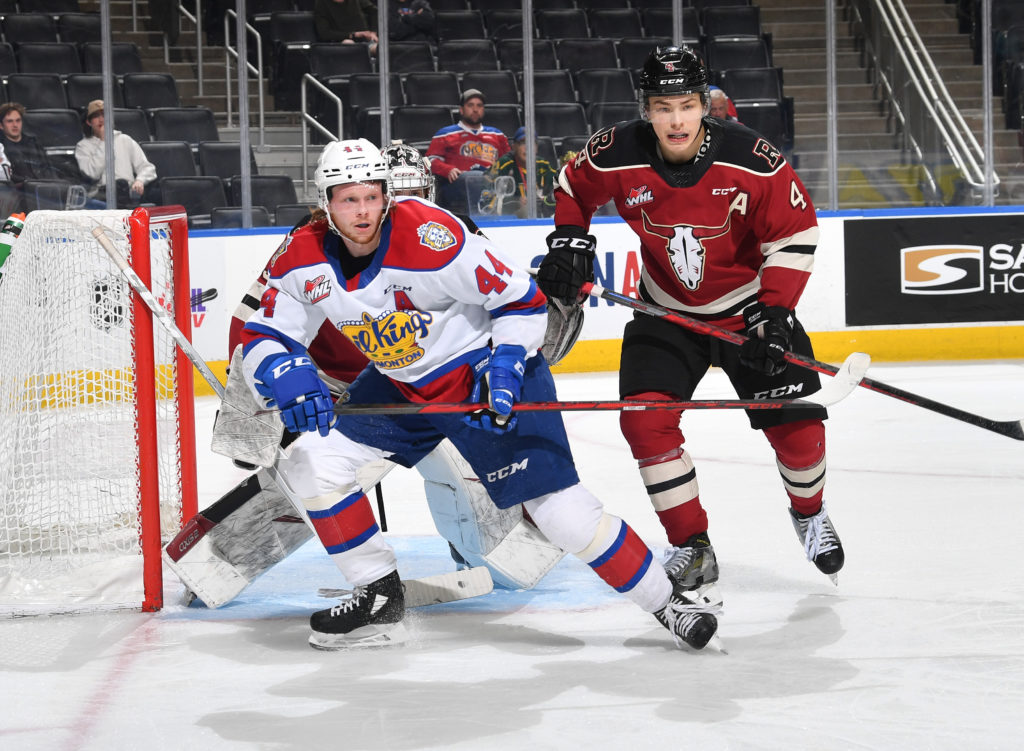 EDMONTON — Heading into a WHL Eastern Conference semifinal versus the Edmonton Oil Kings, the Red Deer Rebels were fully aware that they’d need an A-game from basically every player to emerge victorious.

The Rebels didn’t get that top-grade performance from many of their skaters and Thursday’s Game 1 result of the best-of-seven series was predictable —  a 4-0 win by the favoured Oil Kings witnessed by 3,561 fans at Rogers Place.

“Just in general, it wasn’t a great game,” said Rebels head coach Steve Konowalchuk. “I think the players will agree with that.

“You’re not going to get the result you need if your overall game isn’t quite what it needs to be.”

The Oil Kings led 1-0 after one period on a picture-play marker set up by Montreal Canadiens future defenceman Kaiden Guhle, who wheeled around the Red Deer net on an end-to-end rush and threw the puck out front to Dylan Guenther, who beat netminder Chase Coward low to the glove side.

The game was settled in the second period, as the Oil Kings connected three times to pretty much seal the deal.

The home team got a massive break on their second goal of the evening when a shot by Simon Kubicek glanced off the stick of Rebels forward Ben King and then off the skate of Red Deer defenceman Jace Weir and past Coward.

Guhle struck again late in the period, burying a drop pass from Jakub Demek from deep in the Red Deer zone, and Dawson Seitz made it 4-0 just under two minutes later. Seitz cashed a rebound after a wrist shot by defenceman Luke Prokop glanced off the stick of teammate Jake Neighbours and then off Coward’s pad.

The second period clearly settled the matter, but Konowalchuk was looking at the big picture following the game, which the Rebels played without the passion they showed in beating Brandon in six games in a tough conference quarter-final.

“In general, whatever the reason, the energy, the emotion coming off the last series, whatever . . .  we’re not about to make any excuses,” he said. “But we certainly didn’t have the game we would like.

“Thank goodness it’s only one game. But we have to regroup.”

The Oil Kings are clearly one of the WHL’s top teams and contenders and will present a huge challenge to any club from here on in. Top-heavy in talent and experience, the Oil Kings are built for success this spring.

Regardless, the Rebels were 5-5 against their northern neighbours during the regular season and Konowalchuk is convinced his team can enjoy similar success in the post-season.

“You have to take care of those first. Overall, we have guys who are capable of raising their game.”

Konowalchuk replaced Coward with Connor Ungar to start the third period but insisted the move had nothing to do with the starter’s play.

“I was just changing it up. He (Coward) played good, it was nothing on him at all.”

Game 2 of the series will be played Saturday at Rogers Place, with the third and fourth games set for Monday and Wednesday at the Peavey Mart Centrium.

Notable: The three stars: (1) Guhle, (2) Guenther and (3) Neighbours . . . Until the third period, penalties were at a premium. Several minors and misconducts were handed out over the final half of the frame . . . Coward turned aside 23 of 27 shots, making a series of exceptional saves in the process, and Ungar blocked all eight shots he saw in the third, including an impressive pad stop on Josh Williams . . . Sebastian Cossa, meanwhile, faced just 18 shots at the other end . . . The Oil Kings were one-for-three on the power play, the Rebels zero-for-two . . . Rebels veteran forward Liam Keeler was injured in the first period on a hit that resulted in a checking-from-behind penalty to Seitz, and did not return.