Rebels solid throughout lineup in convincing victory over Warriors 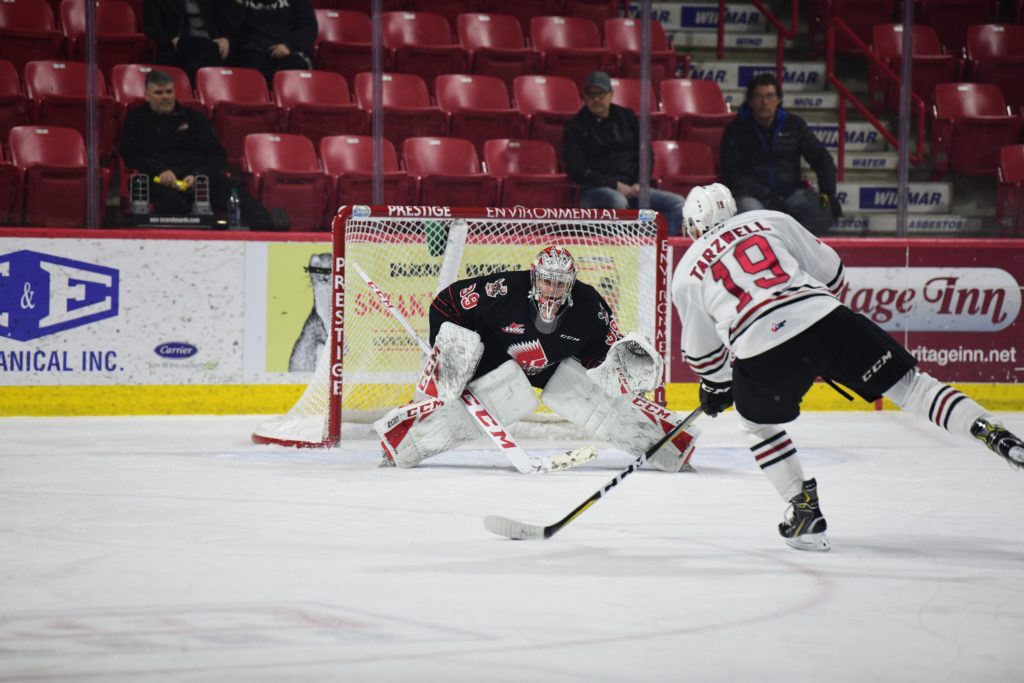 MOOSE JAW — The Red Deer Rebels, over the past week and a half, have kicked the nasty habit of chasing games.

Instead, the Rebels have been the pursuers during that stretch and on Friday posted their third straight WHL win, a convincing 7-3 drubbing of the Moose Jaw Warriors before 2,732 fans at Mosaic Place.

“We played pretty solid. It was just kind of a carryover from the last few games,” said Rebels GM/head coach Brent Sutter. “We’re strong on pucks and moving pucks well. We’re skating and we’re doing a good job of forechecking.

“And probably more than anything, we’re spending less time in our zone and more time in the offensive zone by just being good defending.”

The Rebels were the better team in all three periods, but particularly in the second and third frames in which they outshot the Warriors 24-12 and outscored their hosts 5-1.

With a 4-3 lead heading into the final stanza, the Rebels poured it on and pulled away with three unanswered markers.

Dawson Barteaux gave the visitors a two-goal lead at 6:47 of the third when he moved in from the blueline, cruised into the low slot, went to his backhand and beat netminder Adam Evanoff through the pads.

Ben King, on a tip-in from the edge of the crease, completed a three-way passing play that involved Chris Douglas and Arshdeep Bains at 15:20, and Bains notched an empty-net goal with 1:15 remaining.

“We wanted to be a good third-period team again tonight, like the other night,” said Sutter, referring to Wednesday’s 5-2 home-ice win over Moose Jaw.

“We talked about it after the second, let’s make the third period our best period of the night. The players did a really good job with that.”

Kobe Mohr opened the scoring for the Warriors 3:49 into the contest, beating goaltender Byron Fancy to the stick side from his off wing.

The Rebels pulled even four minutes later when Douglas created a turnover at centre ice and fed the puck ahead to Josh Tarzwell, who scored on a short-handed breakaway.

Owen Hardy restored Moose Jaw’s lead midway through the opening period with a bullet from the high slot, but Rebels rookie forward Keaton Sorensen stole the puck down low in the Warriors zone and potted his second of the season just under two minutes later.

Red Deer’s Dallon Melin redirected a point shot by Chase Leslie for his fourth of the season just past the midway point of the middle period before  defenceman Cayde Augustine, on the power play, tied it for the home side with a one-timer from the right circle at 18:13.

The Rebels, however, wasted no time scoring the eventual winner as Bains cashed a rebound 30 seconds later with Red Deer enjoying a man advantage.

Fancy finished with 18 saves while Evanoff turned aside 28 shots.

“There were no missing links again,” said Sutter. “Byron settled down after probably the first 10 minutes and was solid for us. Our defence did a good job too.

“Like we said the other night, hopefully we’re starting to figure out how we need to play at this level. Our young kids are getting experience and have improved a lot and the veteran players are leading and doing what they’re supposed to be doing.”

As a result, in the space of less than two weeks, the Rebels have looked like a different team than the one that at times struggled mightily earlier in the season.

“Our overall team game has certainly improved a lot since even two to three weeks ago,” said Sutter.

Notable: Bains and Douglas each collected three points, with Bains scoring twice and adding a helper and Douglas drawing three assists. Rookie Ethan Rowland picked up a pair of assists while Melin (1-1) and first star Barteaux (1-1) each had two points for Red Deer . . . Both teams were one-for-two on the power play . . . The Rebels conclude their two-game trip Saturday when they take on the Regina Pats . . . The Rebels will be in Lethbridge Wednesday to face the Hurricanes and will close out the pre-Christmas portion of their schedule with home games next Friday and Saturday versus Medicine Hat and Swift Current.