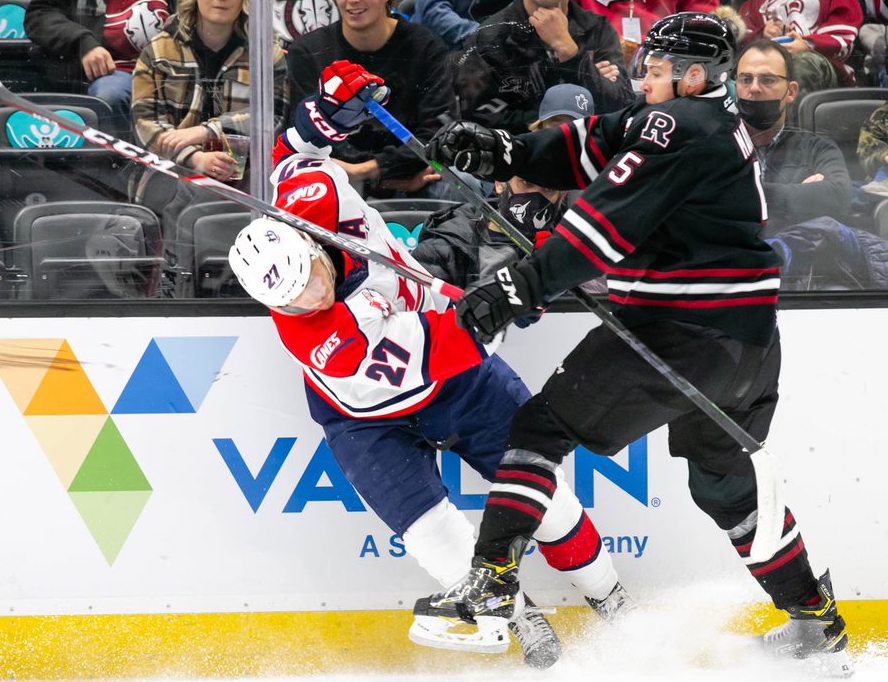 The Lethbridge Hurricanes were hoping to bring a storm to the Peavey Mart Centrium Friday night.

Instead, they ran into a violent disturbance in the form of the Red Deer Rebels, who dominated the visitors in a 6-3 WHL victory in front of 3,071 fans.

“I thought the guys played hard. You could tell they were dialled in,” said Rebels head coach Steve Konowalchuk. “They were playing with energy, playing with passion, and they played with a game plan.”

The contest didn’t start the way the Rebels had hoped, with Chase Wheatcroft cashing a rebound to give the visitors a lead a mere 60 seconds after the opening faceoff.

But it was all Rebels for the next 19 minutes as the hometown squad outshot their guests 20-3 and fired the next four goals to take a commanding lead into the middle frame.

“It was fun to watch that first period,” said Konowalchuk. “There was a bit of adversity when their first scoring chance found a way in, but it didn’t change our guys. They were mentally tough and they kept playing. It was  a good first period.”

The Rebels poured on the pressure and finally pulled even when Liam Keeler took a pass from Jayden Grubbe and scored from the low slot, his shot catching netminder Bryan Thomson leaning in the wrong direction.

Red Deer then employed their power play to grab a lead they would never relinquish. Keeler fed Grubbe as the Rebels broke over the blueline and the Red Deer captain cruised in alone and beat Thomson with a forehand-to-backhand deke.

The Rebels added a pair of late first-period goals when Ethan Rowland connected from a scramble and Kyle Masters notched his first goal of the season with a point shot through a crowd.

“I guess it was just one of those that found its way to the net, super lucky,” said Masters of his first point of the season. “Obviously the celebration kind of explained it, getting the monkey off the back.

“Hopefully there’s more to come and hopefully as a team we can get more accomplished.”

The hosts certainly accomplished plenty more in the second period, holding a 15-9 edge in shots and connecting for two more goals to take a comfortable 6-2 lead into the final 20 minutes.

Hurricanes defenceman Alex Cotton, with his first of two goals on the evening, cut the lead to 4-2 with a power play marker 57 seconds into the period, catching the top of the net with a wrist shot from the point.

But again, the Rebels almost instantly regained control of the game and struck back quickly when Kalan Lind scored from the bottom of the left circle.

Thomson was replaced by Jared Picklyk at that point and while the ‘Canes’ back-up netminder was beaten by Ben King — from a scramble — during a Red Deer power play midway through the period, he held his club in the contest with a multitude of sensational stops the rest of the way. 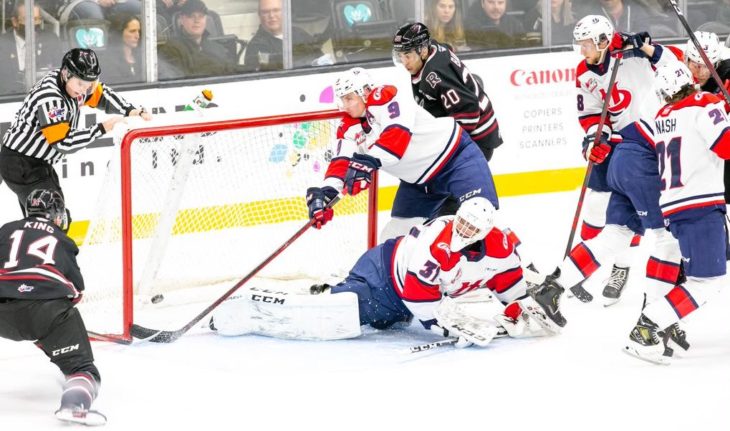 The third period produced just one goal, with Cotton credited with his fourth of the season when his blueline wrister deflected off a Rebels player and past netminder Connor Ungar.

“I liked the energy our guys came out with. It was something they built going back to the last game,” said Konowalchuk, in reference to last Sunday’s 2-1 win over the host Edmonton Oil Kings.

“They really came out in Edmonton and played with that same passion. They got a big win there and then brought it out here today with the same energy. In this league you need that every night so it was good to see.”

Masters agreed that the Rebels were able to build off the win at Edmonton.

“That was a big step as a team. I think we took one step in the right direction,” he said. “I think it helps when the energy is positive and we’ve done a good job of that this season. We’re excited to keep going in a positive direction and keep going skyward.

“Tonight was a 60-minute game and that’s all you can ask. Our identity as a team is what everyone saw out there tonight.”

The fact that six different Rebels found the back of the net Friday was a testament to the team’s depth.

“That’s one of our strengths,” said Konowalchuk. “We obviously have guys we lean on more in certain situations, but tonight your fourth line gets you a goal. They’re reliable out there and push the pace.

“When you get contributions that sure helps. I think the strength of our team is that on different nights different guys can chip in. We can be confident of putting guys on the ice in different situations.”

The Rebels host the Brandon Wheat Kings Saturday. The Wheaties were 9-2 losers Friday in Edmonton.

Notable: Ungar made 18 saves and while he wasn’t busy, he took a goal away from Noah Boyko with a great diving stop in the second period. Thomson made 16 saves on 21 shots before being lifted in favour of Picklyk, who was rock-solid while blocking 20 of the 21 shots he faced over the final 37 minutes . . . Red Deer was two-for-four on the power play while Lethbridge was two-for-five with a man advantage . . . The Rebels swept the three star selections as Dallon Melin was picked as the first star after picking up two assists, followed by Grubbe and defenceman Joel Sexsmith, who contributed one helper and engaged ‘Canes captain Joel Arntsen in a lively first-period scrap.