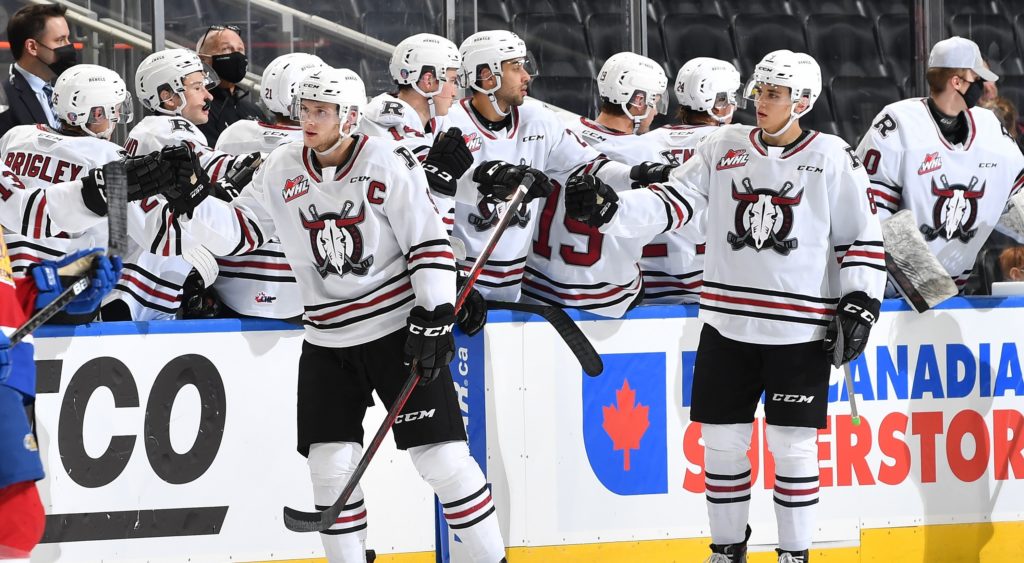 EDMONTON — The Red Deer Rebels were looking for a bounce back performance Sunday after a rather lacklustre outing the day before in a 2-0 home-ice loss to the Calgary Hitmen.

“For sure, we had a good response. There was so much emotion and energy on that bench to start,” said Rebels head coach Steve Konowalchuk following a 2-1 WHL win over the Edmonton Oil Kings before 3,258 fans at Roger Place.

Clearly, the Rebels weren’t ready to play from the opening faceoff of Saturday’s loss. It was a much different story Sunday.

“From a coaching standpoint, there was just a total different feel behind the bench. The guys battled hard for each other and good things happen when you play with that much emotion and energy,” said Konowalchuk.

Carson Latimer scored from a scramble to give the Oil Kings a 1-0 lead after 20 minutes, but the Rebels responded with a pair of second-period goals and then shut the door during the final frame.

Jayden Grubbe, with his second goal of the season, converted a nifty centering pass from Jhett Larson just two minutes into the middle period, and Ben King, from the top of the left circle, one-timed a feed from Christoffer Sedoff past netminder Sebastian Cossa during a late Red Deer power play.

It was also King’s third of the season and stood up as the winner.

The Rebels’ special teams sparkled, going one-for-five on the power play and an impressive four-for-four on the penalty kill, which included a lengthy two-man disadvantage in the second period.

“Huge penalty kill, blocked shots. We got a big goal on the power play and most games if you win the special teams battle it goes a long way toward winning the hockey game,” said Konowalchuk.

Netminder Connor Ungar was selected as the game’s first star after making 29 saves and was a major player in the Rebels’ penalty killing success.

“You’re not going to get through some penalty kills without some saves and blocked shots. We had a combination of both,” said Konowalchuk.

The Rebels closed out a stretch of three weekend games with a 2-1 record that also included an 8-1 win Friday in Calgary.

“Good for them for stepping up and erasing a bad game,” said Konowalchuk. “At the end of the day, you take two out of three any weekend, you’ll take that all year long.”

Closing out the weekend with a win against the highly-ranked Oil Kings was a special treat.

“They’re a good hockey team,” said Konowalchuk. “But for the most part we were focusing on ourselves and getting back to what we had to do. I thought our guys did that.”

Notable: Cossa stopped 16 shots in the Oil Kings net . . . Selected as the second and third stars were King and Latimer . . . The Rebels return to action next weekend when they host the Lethbridge Hurricanes and Brandon Wheat Kings Friday and Saturday.