Rebels rearguard Alexeyev has plenty on his plate 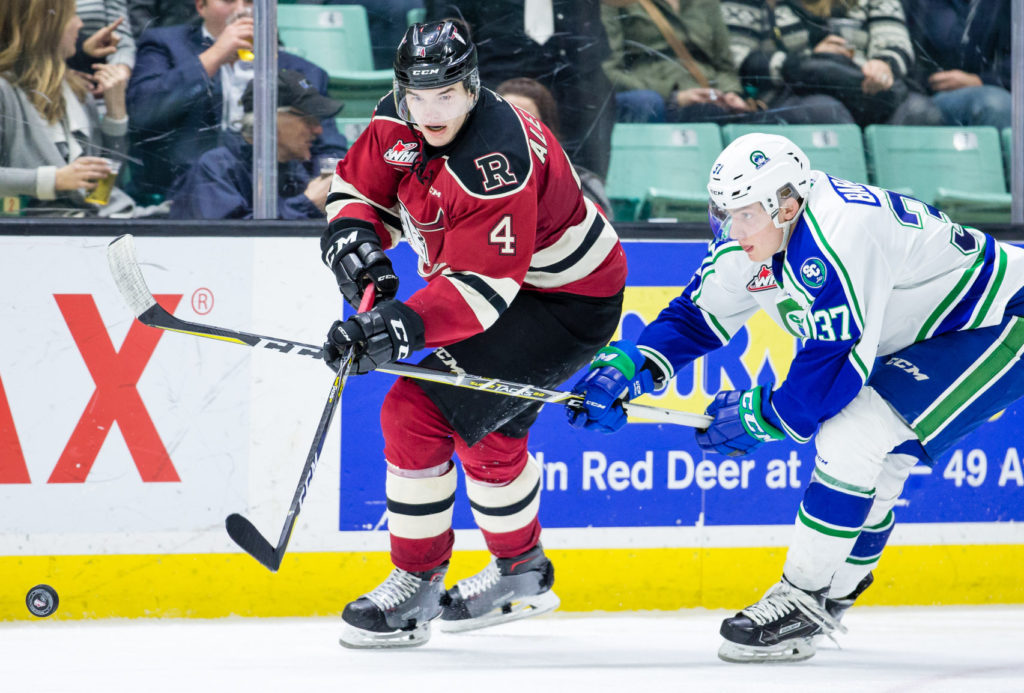 These are exciting times for Red Deer Rebels defenceman Alex Alexeyev.
The barely turned 18-year-old (on Nov. 15) will vie for a spot on Team Russia for the world junior hockey championship in Buffalo and learned on Wednesday that he’ll play in the CHL/NHL Prospects Game set for Jan. 25 in Guelph, Ont.
“I feel amazing about this. It’s a really great experience for me,” he said Thursday, in reference to the two events, one (Prospects Game) a certainty for the Russian rearguard and the other not so much.
“The world juniors is very good tournament with like all the best players there. Same thing for Prospects Game . . . best (CHL) players (eligible) for next year’s (NHL entry) draft.”
Alexeyev will suit up for the Rebels’ final two games of their WHL pre-Christmas schedule — Friday in Medicine Hat and Saturday at home versus the Tri-City Americans — before boarding a Sunday morning flight to Toronto.
From there, he will fly to Rochester, N.Y., where the Russian team hopefuls will be headquartered while competing in exhibition games prior to the WJC, which opens on Boxing Day.
Alexeyev will be one of 10 blueliners competing for a berth with the Russian squad.
“Seven defence from Russia will come here and three from North America will join them and I think they will cut two defence,” he said.
World junior teams have historically been top heavy with 19-year-olds and there’s little to suggest that this year will be any different.
Alexeyev, though, is well known to the Russian Ice Hockey Federation — having played for his home country in under-16, under-17 and under-18 international events — and feels that may be to his advantage.
“For sure, because I know for sure the head coach (Valeri Bragin) for the under-20 (WJC) team,” said Alexeyev. “He was always there for a couple games I played in U17 and U18 and he pay attention.”
Bragin was also behind the Russian bench during the CIBC Canada/Russia Series last month. Alexeyev, fresh off an injury he suffered in just the Rebels’ third game of the season, was on the Team Russia roster for the two games against Team WHL.
‘The first game I kind of was getting used to the game because it had best players, and I think I do well,” he said.
“The second game was a little better I think because I get used to the (calibre of play).”
Alexeyev is projected as a possible first-round pick in next year’s NHL draft and obviously has world-class talent. But will that be enough to land a berth on Russia’s WJC team?
“It’s going to be a challenge for him, no question,” said Rebels GM/head coach Brent Sutter, who coached Canada to two gold medals in the WJC. “To play in the world junior championship as an 18-year-old is not an easy thing to do, especially as a defenceman.
“And yet he has the ability, the size and the strength. It depends on how the team is going to look on the back end. He’s still 18 and are they going to go with a bunch of 19-year-olds? You never know what a team is going to look like, especially on the back end.
“He’ll have to have some good exhibition games for them and show that he can play.”
Alexeyev was enjoying a stellar WHL rookie campaign with the Rebels before suffering a season-ending injury — and undergoing surgery — last January. He was poised to carry right on this fall but then missed another lengthy stretch with an early upper body ailment. 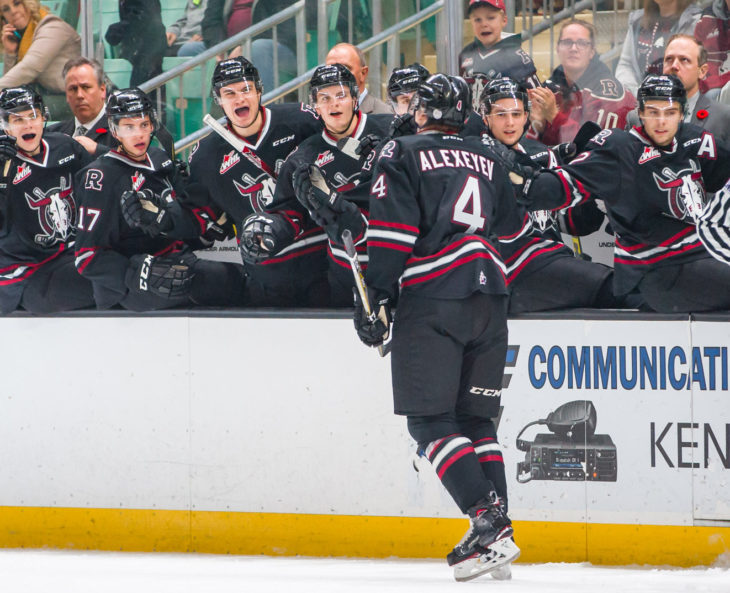 By his own admission, his most recent play was somewhat lacking prior to a sit-down meeting with Sutter.
“In the start (of the season) I feel I play pretty good, then after (Canada-Russia Series) I get a little bit lower,” he said. “I was talking to Brent and he gave me advice what I need to do to get better. He and our coaches really helped me.”
Sutter fully understands why Alexeyev has lost his focus from time to time.
“The big thing with Alex is there’s a lot going on for him this year,” said the Rebels boss. “After missing the last half of last season, he came back in the fall and had a good camp and played well in exhibition games and the first two games of the season, then he was hurt again.
“Then right before he comes back (to the Rebels) it’s the Canada-Russia Series and all of a sudden he’s focused on wanting to get back for that instead of just focusing on coming back and being a good player for us.
“In a way, that hurt him a bit.”
Now, of course, the St. Petersburg native has a world junior training camp on his immediate plate and the Prospects Game also in his day planner. And further down the road are the NHL draft combine and entry draft, both slated for June.
“It’s one thing after another that’s happening for him and that’s just the way it is when you’re a top level player,” said Sutter. “You have to be able to manage that right and you can’t lose focus on what you need to do first and foremost, and that’s be a good player on the team you’re playing for.
“Young kids can be effected a lot by distractions, but overall we know what type of player Alex is and what type of player he can be. It’s just that this year it’s been a consistency thing with him.”
Notable: Forward Arshdeep Bains, 16, has been called up from the B.C. Major Midget League and will be in the Red Deer lineup Friday and Saturday. Bains, a signed prospect, is leading the BCMML in scoring with 57 points (16g,41a) in 22 games with the Valley West Hawks . . . The Rebels’ first game after Christmas is Dec. 27 against the visiting Edmonton Oil Kings.