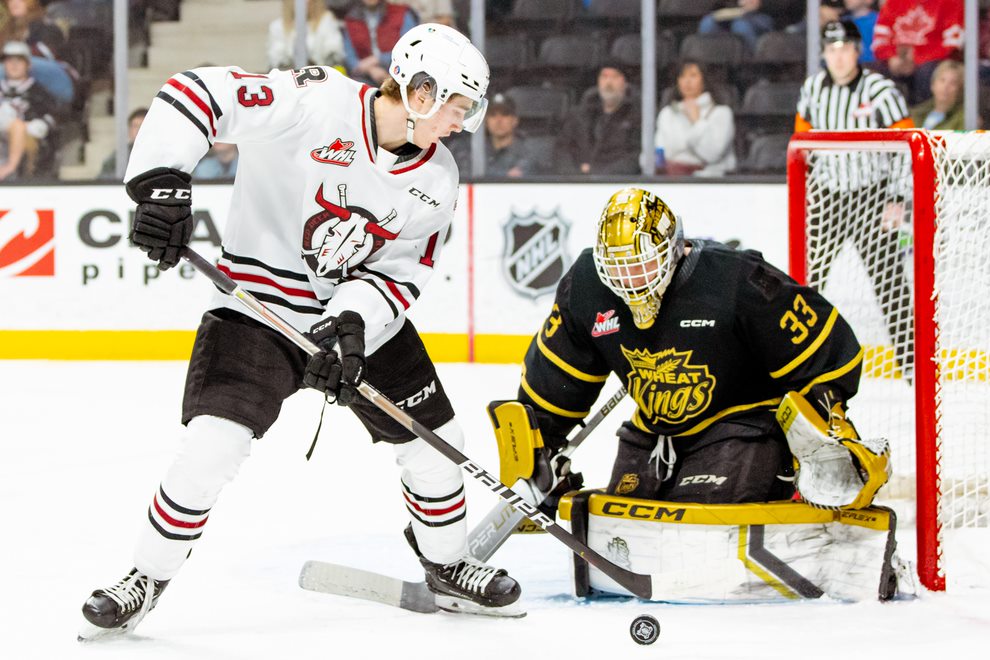 The Red Deer Rebels had quite a flair for the dramatic Saturday night at the Peavey Mart Centrium.

Trailing the Brandon Wheat Kings 1-0 since early in the second period, the Rebels finally broke through with Jayden Grubbe’s power play tally with 2:09 left in regulation time, then got an overtime goal from Kalan Lind to pull out a 2-1 WHL win before 4,615 fans.

“What a finish. I’m really proud of a lot of guys, how they battled through,” said Rebels head coach Steve Konowalchuk, who was also impressed with the visitors.

“It was not our best execution game by any means, but give them credit. They’re in playoff mode right now and they came out and played like that. Our guys just weren’t as sharp, but when the game was on the line they dug deep.”

The Wheat Kings, who scrambled to put together a lineup for the game due to a stomach bug ravaging the team, won their share of puck battles, played a solid defensive game and got a stellar performance from netminder Nicholas Jones, who shut the door until the very late stages.

As good as Jones was, Rhett Stoesser was more than his equal in the Red Deer goal, making a series of Grade-A stops, including a pair in succession during a late first-period penalty kill.

Stoesser also robbed Nolan Ritchie with a spectacular sliding stop early in the third period and then stood tall when Rebels forward Carson Birnie was tagged with a high sticking double minor at 12:23 of the third.

“Stoesser made some huge saves to keep it to one goal,” said Konowalchuk, whose club erased seven Brandon power plays.

“The penalty kill really won us the game at the end . . .  Weirsey (Jace Weir) with some huge blocked shots and other guys blocking shots. They don’t get on the scoresheet and sometimes don’t get celebrated, but there were some huge blocks to keep it 1-0.”

Brandon’s lone goal came off the stick of Ritchie at 4:34 of the second frame. The veteran forward scored on a rebound during a scramble and the goal looked like it might hold up, especially with the Rebels forced to kill the third-period double minor.

But the Wheat Kings were penalized late in the game — Anthony Wilson was called for hooking with 3:04 remaining — and Jayden Grubbe scored on a redirect of a pass from Kai Uchacz just under a minute later.

The visitors never controlled the puck in the extra frame and the Rebels needed just 39 seconds to end the contest.

Uchacz directed a shot that bounced in the air and came to Lind in front. The Rebels forward promptly tucked it under Jones and the celebration was on. 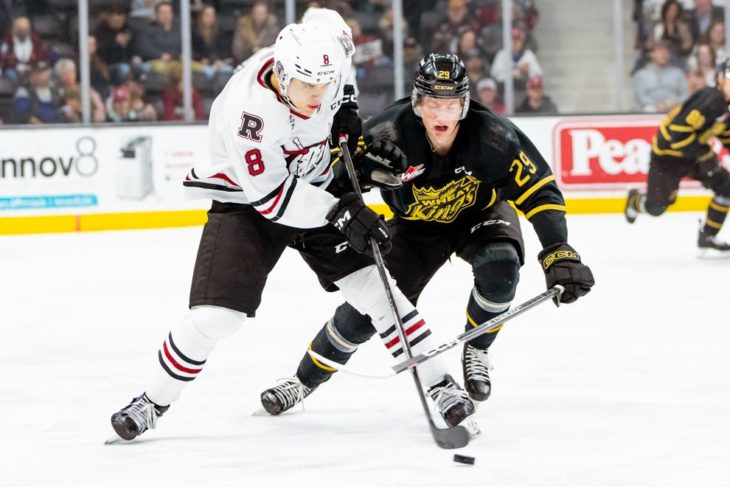 “Uch just tried to get the puck on net and I saw it in the air,” said Lind. “I hit it with my hand, then just threw it on net. I didn’t even know where it went in the net. Maybe a little five-hole.

“It was a great character win for us and we got a great game from Stoessey. He’s been kicking it all year and ever since (fellow netminder Kyle) Kelsey got hurt he’s come in and just kind of filled the role.”

Konowalchuk liked the performances he got from Uchacz, who engaged Luke Shipley in a spirited scrap and assisted on both goals, and Grubbe.

“Ucher was trying to get us energy in the third period and Grubby, our captain, was in beast mode. He was hard on pucks all night, on the penalty kill and power play,” said the Red Deer bench boss.

“As much as there were definitely a few things we didn’t like throughout the game, I think we showed a lot of character to find a way to fight through and get it done.”

The win was somewhat vengeful for the Rebels who had lost both earlier meetings to their guests, who sit three points out of an Eastern Conference playoff berth.

“We knew they had a couple of wins against us this year and we wanted to come out with some fire and found it by the end of the game,” said Lind.

With their seven-for-seven performance Saturday, the Rebels success rate on the penalty kill improved to 84.7 per cent, still second-best in the league. Of course, a team’s best penalty killer is the goaltender.

“Our penalty kill was amazing tonight,” said Lind. “We helped Stoesser out when he needed it and he made some unreal back door stops, three or four of them were pretty crazy.

“Our penalty kill has been a big part of our game all year. We’ve kind of been at the top of the leader board in percentages.”

Notable: The Rebels were one-for-six on the power play . . . The three stars: (1) Grubbe, (2) Jones, who made 28 saves, and (3) Stoesser, who blocked 32 shots . . . The Rebels put the wraps on a three-games-in-three days stretch Sunday with a 4 p.m. contest versus the host Calgary Hitmen. The Hitmen have lost four games in succession, including Saturday’s 7-1 beatdown at Medicine Hat.