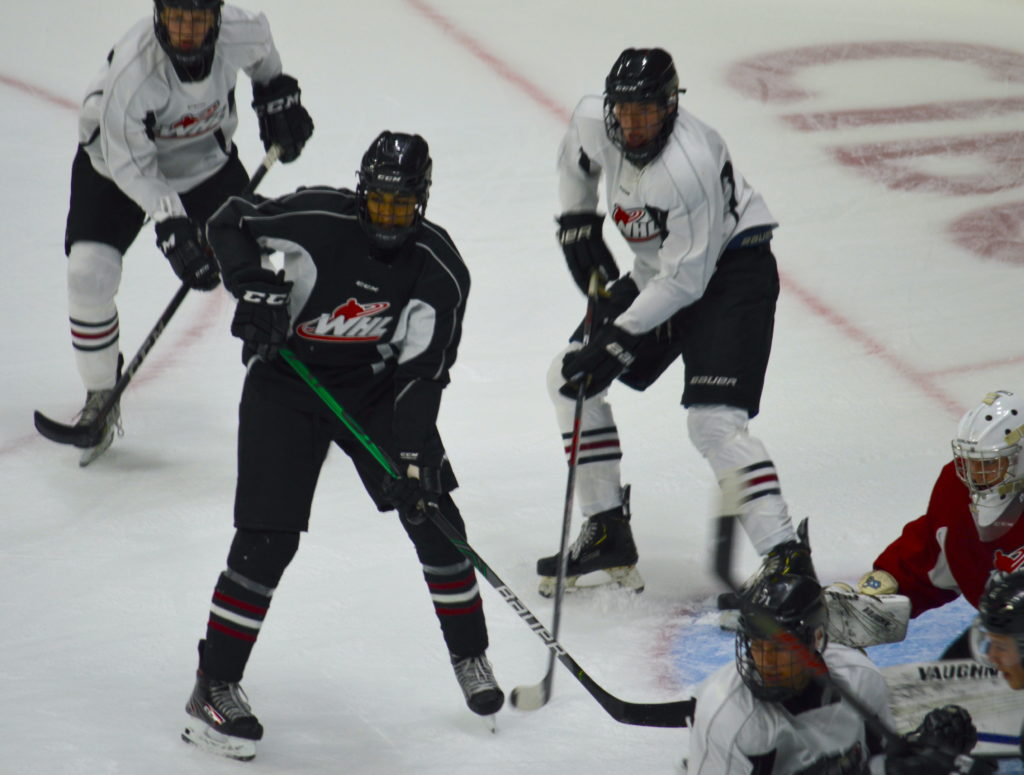 To say that hockey runs in the family of Red Deer Rebels prospect Arjun Bawa would be somewhat of an understatement.

Bawa’s father, Robin, played five seasons in the WHL with New Westminster and mostly Kamloops – putting up 113 points (62g,51a)  as a 20-year-old with the Blazers in the 1986-87 season— and went on to a 12-year pro career that included 61 NHL games with Washington, Vancouver, San Jose and Anaheim. He was the first player of South Asian descent to suit up in the NHL.

In addition, the younger Bawa’s stepbrother, Kayden Sadhra-Kang,  appeared in nine games with the Lethbridge Hurricanes during the abbreviated 2020-21 season.

Through three days of the Rebels training camp, Bawa, a 16-year-old forward, has shown that he’s capable of playing at the major junior level either immediately or in the very near future.

“It’s been exciting. I was a little nervous at first but as the games go on I’m getting better,” he said following Monday’s scrimmage at the Peavey Mart Centrium.

The native of Richmond, B.C. (pictured above, in Black) was selected by the Rebels in the second round of the 2020 WHL bantam draft after scoring 16 goals, adding 25 assists and accumulating 68 penalty minutes in 30 games with the St. George’s School U15 prep team.

Rebels associate GM Shaun Sutter touched on Bawa’s size and hockey smarts when the six-foot-two winger signed with the team shortly after the draft.

“Arjun is a tall, cerebral, two way forward who has good vision and skill to be a playmaker while also possessing awareness on both sides of the puck to be a responsible player who can produce offensively,” said Sutter. “His upside is high with his size, skill set and hockey sense.”

“I didn’t have any problem at all with signing here,” said Bawa. “The Rebels are a good fit for me, Brent (GM Sutter) has a lot of connections to the NHL. I was really excited when I got drafted by them.”

Due to the pandemic, Bawa got into just five games last season with the Delta Hockey Academy U17 prep squad, scoring twice while racking up 18 minutes in penalties.

“I feel like I’m a power forward who can drive the net,” he said. “I’m a bigger player and I can use my size to my advantage. Size is a definite thing in this league.”

Bawa credited his father and Yogi Svejkovsky for helping him develop as a player.

“My dad taught me most of the things I know right now, him and Yogi have been the biggest influences in my hockey career so far,” he said. “Yogi was my coach at Delta and also with a spring team called the BC Bears. He played in the NHL as well (with Washington and Tampa Bay).”

Bawa is dead set on earning a roster spot with the Rebels for the coming season.

“Even if I’m a fourth line player, I’m fine with that,” he said. “I’m definitely grinding to get noticed and make my spot on the team.”

“He can skate and he’s a good player. He has a big body and the team wants to establish and identify with big strong wingers up and down,” said Konowalchuk.

“He can create a forecheck and take pucks to the net. That’s the kind of player we envision he can become.”

“For a young kid he’s picking up some of the things we’re talking about,” he said. “He’s not going to make mistakes that cost his team.”

Team White got goals from Kalan Lind, Kai Uchacz, Jhett Larson and Dallon Melin in a 4-1 win over Team Black in Monday’s scrimmage. Team White took a 2-1 lead in the four-game series that will conclude with today’s final 4 p.m. scrimmage and lead into Wednesday’s 7 p.m. Black and White game.

The Rebels’ first preseason game is Saturday at Edmonton. Red Deer will host Calgary Sept. 17 and visit the Hitmen the following evening.

The Rebels will conclude exhibition play with a home-and-home set with the Lethbridge Hurricanes, Sept. 24 on the road and Sept. 25 at the Centrium.