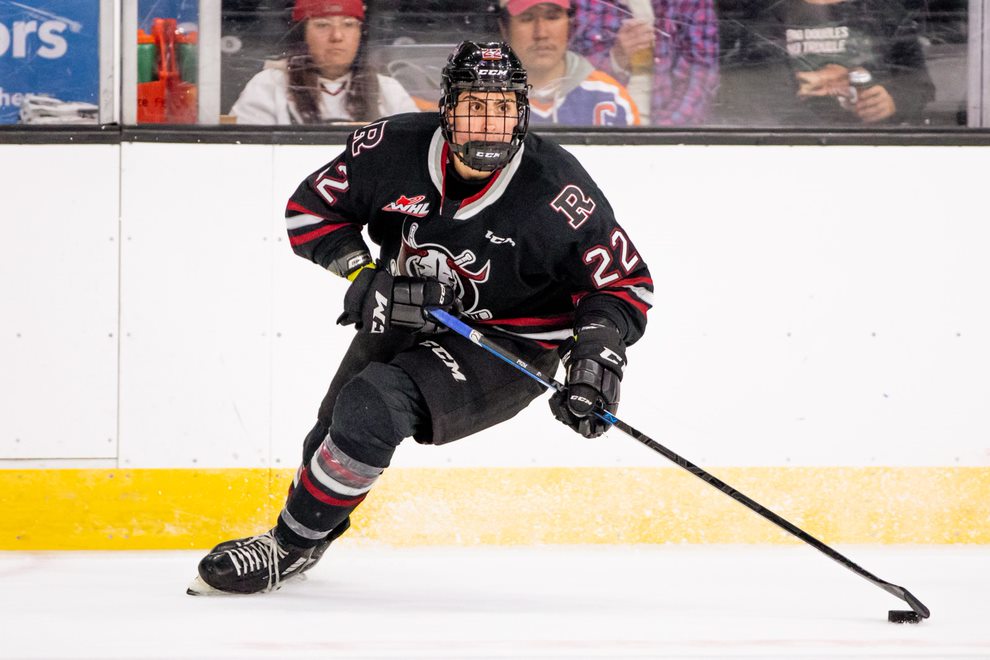 The Red Deer Rebels are extra high on at least seven players selected in the last two WHL Prospects Draft as well as a US Priority Draft pick.

All eight have signed a WHL standard player agreement with the team and all are playing against mostly older competition this season.

Here’s a look at how the prize prospects are currently faring:

The Rebels’ second pick, 40th overall, in 2021 sports a 3.00 goals-against average and .892 save percentage in 10 games with the midget AAA Saskatoon Contacts.

This season he’s recorded a single shutout, making 23 saves in a 4-0 win over the Warman Wildcats during the weekend. Wutzke has a 5-2-0 record with the Contacts.

More recently, Wutzke guarded the net for Team Canada Red in the World U17 Challenge. In three games he was 3.09, .883 with a 1-1-0 record which included a 24-save shutout versus Czechia.

“When you watch him, as a goalie you really trust him and really like his battle (level). He gives his team a chance to win every single night,” said Rebels associate GM Shaun Sutter at the time of Wutzke’s signing, in December of last year.

Saab, an Edmonton native, picked up two assists in his most recent U18 game — a 5-2 loss to the Fort Saskatchewan Rangers — and has also suited up for one outing with the AJHL Bonnyville Pontiacs.

Like Wutzke, Saab (pictured above) played in the 2021 WHL Cup, scoring five goals and adding one assist in five games while helping Alberta secure a silver medal.

“He’s a very competitive player, everyone witnessed it at the WHL Cup,” said Sutter when Saab signed last December. “He’s a player who can score, has good size and good instincts for the game.”

A Kamloops native, Smith was selected in the fifth round of the 2021 draft and signed with the Rebels in April of this year.

“Evan is a two-way forward with size and a high IQ who contributes in all situations,” said Sutter. “He is going to be a quality player for us.”

Smith, six-foot-one and 170 pounds, picked up a single assist for the Yale Hockey Academy U18 prep squad in an 8-3 win over Pacific Coast HA in his most recent game. The 16-year-old has contributed four goals and 13 points in 14 games with Yale HA this season.

Taken in the sixth round of the 2021 Prospects Draft, Thurston signed with the Rebels last month.

This season, the BC product is a member of his hometown Delta Hockey Academy U18 prep team and has tallied two goals and nine points with 10 PIMs in 15 games.

In his most recent action, the six-foot, 163 pound defender garnered an assist in a 6-0 win over the North Shore Warriors and was assessed a minor penalty in a 3-2 loss to Pacific Coast HA.

The Edmonton native, a seventh-round selection in the 2021 WHL draft, has scored five goals and recorded nine points — as well as 26 penalty minutes — in 12 games with the U18 Edmonton Jr. Oilers Blue this season.

Burlock, 16, signed with the Rebels in September following a strong showing in training camp and started the season with the team before being reassigned to the Jr. Oilers. He re-joined the Rebels for five games in October and November and notched his first-ever WHL goal in a 7-2 win over his hometown Edmonton Oil Kings.

“He has earned this opportunity using his size and strength while showing the ability to play alongside other offensive players and produce. We’re excited about his commitment to improve and the high ceiling he possesses as a player,” said Sutter at the time of the signing.

Burlock, six-foot-two and 192 pounds, was recently reassigned for a second time and contributed one assist as the Jr. Oilers defeated Fort Saskatchewan 4-1 on the weekend.

The Calgary (pictured below) native was the Rebels’ first pick, 17th overall, in the 2022 WHL draft in May and signed with the club a week later. 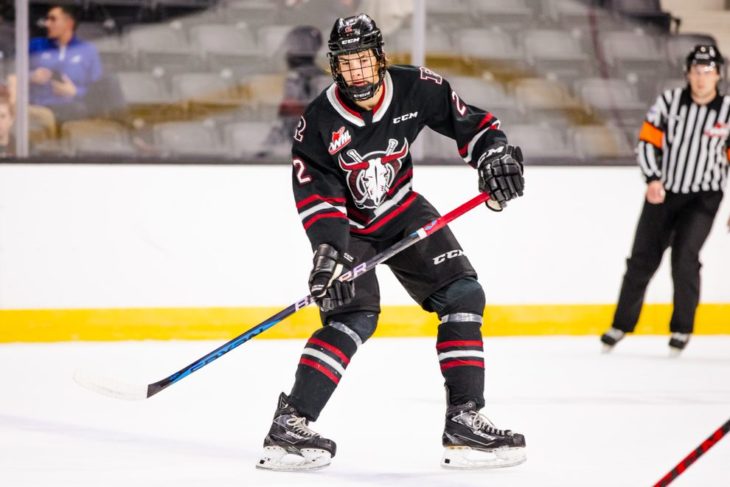 Vlooswyk, who turns 16 next month, helped Alberta win silver in the 2021 WHL Cup and was recently named to the provincial team for the 2023 Canada Winter Games.

At six-foot-two and 161 pounds, he has scored three goals and recorded nine points in 17 games with the U18 Calgary Buffaloes this season, helping the team to a league-best 16-0-1-1 record.

“Luke is a long, athletic two-way defenceman with reach and mobility while being hard to play against,” said Sutter. “Luke can skate and push the play up ice quickly with good exit plays. He possesses natural leadership qualities, so we feel there is a high ceiling to his game as he grows into his big body and fills out.”

Vlooswyk joined the Rebels for two games last month and in his most recent U18 games was held pointless in a 2-1 win over the Calgary North Stars and scored once and picked up a minor penalty in a 9-2 thumping of the Airdrie Bisons.

The Winnipeg native, 15, was the Rebels’ second-round selection, 39th overall, in this year’s WHL draft and is currently playing with the Rink Hockey Academy U18 prep team in his hometown.

In 11 games this season, the six-foot-three, 170-pound forward has sniped three goals and added five assists for eight points.

Gard, who along with two other 2022 Red Deer draft picks — defencemen Tate Dolinsky and Reece Gault — will suit up with Team Manitoba in the 2023 Canada Winter Games.

Gard signed with the Rebels in late May.

“We see a tall, athletic player with layers to his game who can skate and think the game,” said Sutter. “His ceiling is high, and we believe as a scouting staff that he will take leaps in his development as he matures and fills into his big frame.”

Roberts, from Monument, Colo., was Red Deer’s first-round pick in this year’s US Priority Draft, and was impressive during training camp in September.

The 15-year-old contributed 29 goals and 49 points in 46 games with the U14 AAA Colorado Rampage last season — and was listed as five-foot-11, 150 pounds at the time — and this season is with Team Kelly of the USA Select 15 league and has scored once in four games.

He signed his WHL contract with the Rebels in September.

“We’re very excited that Jeramiah and his family have chosen to pursue his academic and hockey goals with our club,” said Sutter. “He is a fast, talented player who likes to get involved physically and battle. He was a standout at our training camp with his speed and skill while showing he has a bright future in the WHL.”

Notable: The Rebels take on the Medicine Hat Tigers Wednesday at the Centrium . . . Red Deer is the second WHL team to reach 40 points on the season with a record of 18-5-1-3, and sits atop the Central Division — nine points up on Lethbridge — and is second overall in the Eastern Conference . . . Kai Uchacz picked up three assists on the weekend and continues to lead the team in points with 33 (18g,15a) . . . Hunter Mayo is tied for first among league defenceman with 10 goals, including seven on the power play . . . Christoffer Sedoff recently became the 14th Rebels defenceman to record 100 career points. The Finnish rearguard is riding a four-game point streak (1g,4a) and has 26 points, including two goals, in 25 games this season . . . The Rebels Toque and Teddy Toss game is Friday against the visiting Edmonton Oil Kings.

Rebels fired up for Bedard's sold-out visit
1 day ago