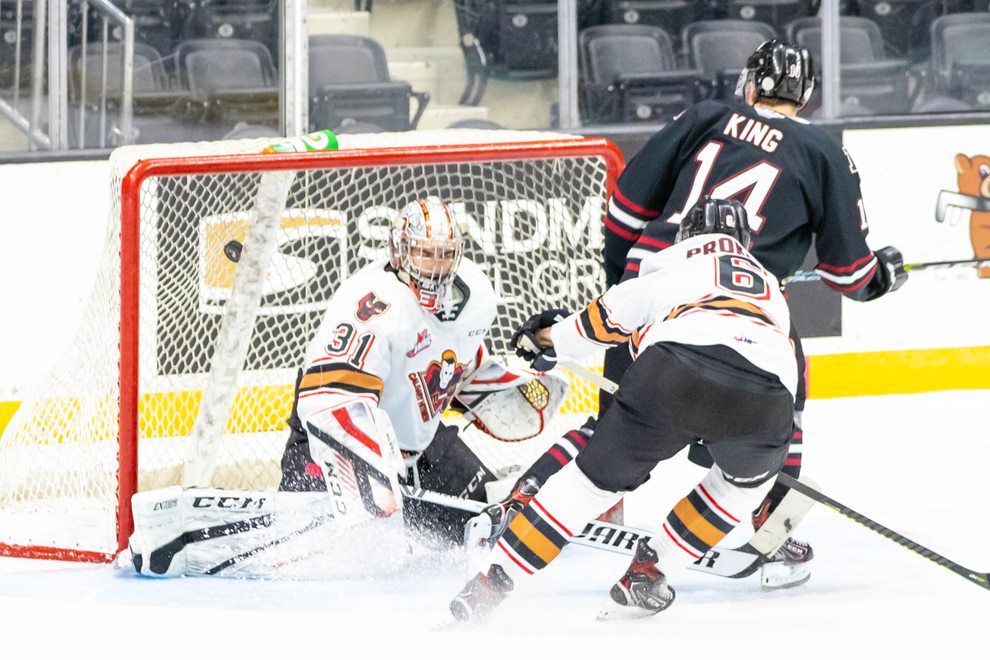 You might say the Red Deer Rebels were due.

After being stoned by a hot goaltender in a 2-0 loss the night before in Calgary, the Rebels finally broke through on Saturday and posted their first win of the abbreviated WHL season at the Centrium.

Arshdeep Bains struck for his first goal of 2021 at 4:06 of overtime as the Rebels knocked off the visiting Hitmen 3-2 in the second leg of a Central Division home-and-home series.

Rebels defenceman Chase Leslie started the decisive play that led to an odd-man break by Bains and Ben King.

“Les brought it up the ice, Bainsy got on it and I saw a two-on-one,” said King. “Bainsy fed it over, I couldn’t get a clear shot so I just tried to give it back to him.

“He made a good play to stop it and put it in the net. It was just a good two-on-one play and luckily we got away with it.”

The Rebels were snake-bit through the first two periods, particularly the opening frame, and watched the Hitmen stake themselves to a 2-0 lead in the second period on goals by Tyler Zandee and Sean Tschigerl, his second in as many nights.

The visitors broke a scoreless tie at 7:15 of the period when a shot by Evan Toth bounced off the end boards, back out front and right onto Zandee’s stick.

Calgary doubled its lead nearly nine minutes later with Connor Gabruch forcing a turnover behind the Red Deer net and feeling in front to Tschigerl.

The Rebels, on a power play, finally got on the board with a mere two seconds remaining in the stanza as Chris Douglas, in the right circle, one-timed a pass from Mason Ward past netminder Jack McNaughton.

King, with his first of the young season, pulled the Rebels even with 2:54 remaining in regulation time. The veteran forward outraced a Calgary defender to get to a rebound of a long shot by Kyle Masters and beat McNaughton to the top of the net from in tight.

“The goal at the end of the second period gave us some life and momentum going into the third,” said Rebels GM/head coach Brent Sutter.

“In the third period and overtime we had the puck a lot and made some nice plays. Then you never know how things are going to turn out in overtime. Hopefully we’re starting to find our way here where we can get some consistency in our game where we’re playing the right way all the time.”

That consistency wasn’t there on Saturday, as the Rebels came out flying and carried the play in the opening period — outshooting their guest 15-5 — before letting up somewhat in the second. 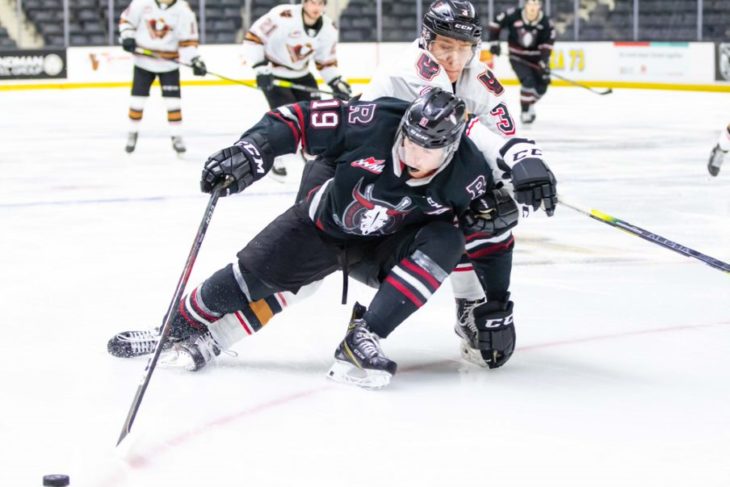 “I thought the first period was as good a period as we’ve had since we started here,” said Sutter. “We played extremely well in that first period.

“In the second period we stopped moving our feet and took some penalties which got us out of our rhythm. They (Hitmen) were obviously better in the second than in the first.

“In the third we got back to playing like we can play and got a break on the second goal to tie it up.”

The overtime winner set off a celebration as the Rebels players poured off the bench.

“It’s always nice to win and to come back like that to win is even bigger,” said Sutter. “The kids are practising hard, they’re making a commitment here to get better. All the teams have lots of time to work in practice to develop and get better.

“But there’s nothing like competing in a game and it’s nice to get the victory for sure.”

As King noted, the Rebels were an improved and better prepared team during the Calgary series than they showed in a pair of losses to Medicine Hat on the opening weekend.

“The first weekend we were just trying to get the legs back, we hadn’t played hockey for a year,” he said. “This weekend we were feeling good after a long week of practice and had our legs back.

“Yesterday we battled hard and just couldn’t find a way to get one in. Their goalie (Brayden Peters) stood on his head. Today we came out flying, let off the gas a bit and then got back on in the third and came away with the win.

Anders turned aside 32 shots, one more than McNaughton, and robbed Josh Prokop twice in the third period — on a clear cut breakaway and later on a shot from the low slot.

° Forward Kalan Lind, who turned 16 in January, made his WHL debut with the Rebels on Saturday and was assessed a high sticking penalty in the second period. “He handled himself very well, you can tell there’s game in him,” said Sutter of the Rebels’ first round pick — sixth overall — in the 2020 WHL bantam draft. “He’s got some tools and he’s a competitor, he’s fiery. But he’s also a very skilled player and he’s going to be a very good players in this league.” . . . The Rebels will take on the Lethbridge Hurricanes in a three-game series next weekend. The Rebels will host on Friday and Sunday and will visit the Hurricanes on Saturday.