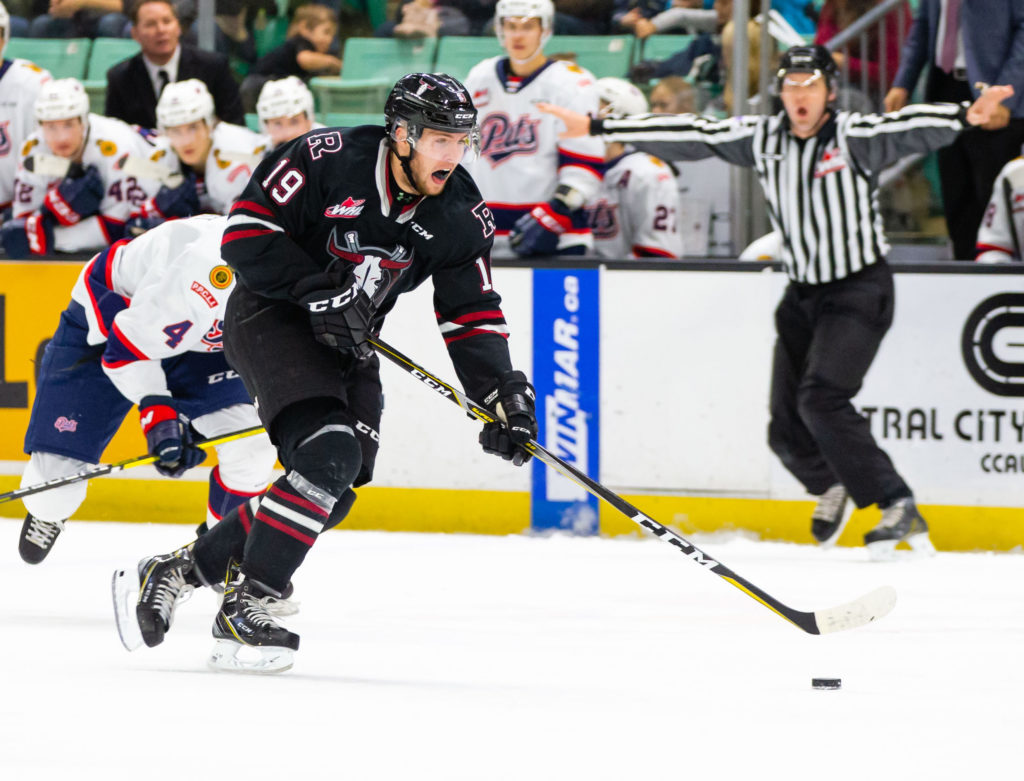 REGINA — Trailing by a goal, the Red Deer Rebels cranked it up in the third period of Saturday’s WHL contest against the Regina Pats.

Unfortunately for the visitors, they fired blanks in the final frame despite outshooting their hosts two-to-one (14-7).

Part of that was due to the fine play of Pats netminder Max Paddock. But a bigger part was the Rebels’ inability to hone in on their target.

The Rebels wasted a generous handful of excellent looks by shooting high and wide of the Regina cage, and Paddock turned aside the 14 shots that were on target to allow his team to hang on for a 3-2 win before 4,418 fans at the Brandt Centre.

“We had chances in the third, we just didn’t capitalize. We missed the net on three or four quality scoring chances, we shot the puck wide,” said Rebels GM/head coach Brent Sutter.

All the scoring came in the first 40 minutes as the Rebels struck first, then fought back from a two-goal deficit before surrendering the eventual winner.

Josh Tarzwell fired his team-leading 12th goal of the season — and extended his scoring streak to four games — 4:12 into the contest and Pats captain and former Rebel Austin Pratt created the first of two delays shortly after when he rung a shot off the crossbar.

The red light flashed and despite the referee signalling no goal, the majority of the fans littered the ice with stuffed animals on the Pats’ Teddy Bear Toss night.

Following a brief wait, the game resumed and the remainder of the furry toys hit the ice when Pratt, from the edge of the crease, tipped a point shot by Zach Wytinck past Rebels netminder Byron Fancy at the 14:41 mark.

The Pats jumped in front a mere 39 seconds into the middle frame on a redirect by Drew Englot, but Brett Davis pulled Red Deer even less than two minutes later, cruising over the blueline, cutting across the high slot and beating Paddock through the pads.

Ty Kolle notched the eventual winner during a Regina power play late in the period, his shot from the top of the right circle sneaking under Fancy’s glove.

“Our first period was OK, but our second wasn’t a great period for us. It might have been the worst period we’ve played the last four or five games,” said Sutter. “I just thought we weren’t driving or pushing the pace at all in the second.

“We weren’t heavy on the puck tonight in the first two periods. We lost too many battles. And then we got going in the third. We had it going pretty good, we just didn’t capitalize on opportunities.”

Paddock blocked 26 shots in total while Fancy made 21 saves, including a terrific glove stab on Robbie Holmes in the final period.

“Byron played well. He held us in the fight,” said Sutter.

The Pats were one-for-three on the power play, the Rebels zero-for-three.

Red Deer has three games remaining prior to the Christmas break — Wednesday at Lethbridge and Friday and Saturday at the Centrium versus Medicine Hat and Swift Current.