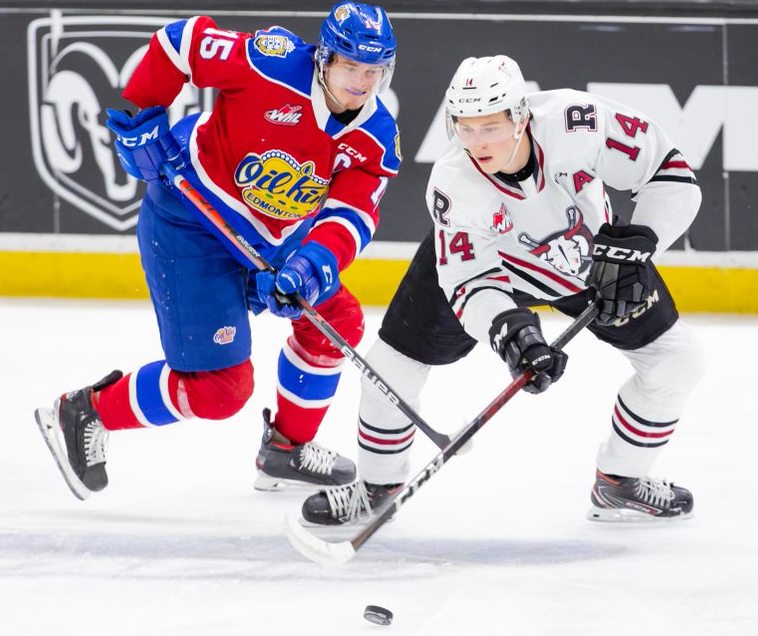 After some up-and-down outings and several close calls, the Red Deer Rebels at long last snared a win on Saturday, snapping a 13-game WHL Central Division losing streak in the process.

“That feels great just to finally get a win under our belts after however many (losses) it was,” said forward Ben King, who tallied a pair of early goals in a 4-2 victory over the visiting Edmonton Oil Kings.

“We’ve had some close games. Tonight we just stuck to it as a team and finally got that win. We know what it takes and we just have to keep doing that moving forward.”

King potted his ninth and 10th goals of the season to stake the Rebels to a 2-0 lead before the game was five minutes old.

The 18-year-old centre cashed his own rebound a mere 40 seconds into the contest and then, from the left circle, took a pass from Jace Weir and ripped a bullet past netminder Sebastian Cossa with the Rebels on the power play.

Ultimately, the fast start proved instrumental in securing the win over the Oil Kings, who clinched the Central title last weekend.

“That team, once they get one they kind of get rolling, so for us to get a few and get the lead and get our game going before them, it really helped,” said King.

Logan Dowhaniuk scored for the visitors late in the period, but Chris Douglas restored Red Deer’s two-goal lead with a short-handed tally at 7:56 of the middle frame. Douglas broke down the right side and caught the far side of the net from a sharp angle.

The goal came with the Rebels serving the second of six consecutive penalties in the period.

The visitors, whose power play was lethal through most of the earlier six games versus Red Deer — all Edmonton victories — were just one-for-six with a man advantage.

“We ran into some penalty trouble which was kind of nerve wracking, but we killed them with a lot of big blocks,” said King. “(Blake) Gustafson probably had 10 to 20 blocks tonight, he was the first star in my mind.

“Guys were putting their bodies on the line and that’s what it takes to win.”

With Douglas off for slashing, Dowhaniuk notched his second of the night with a blast from the point late in the frame to make it a 3-2 game. It was the Oil Kings’ only power play goal of the contest. 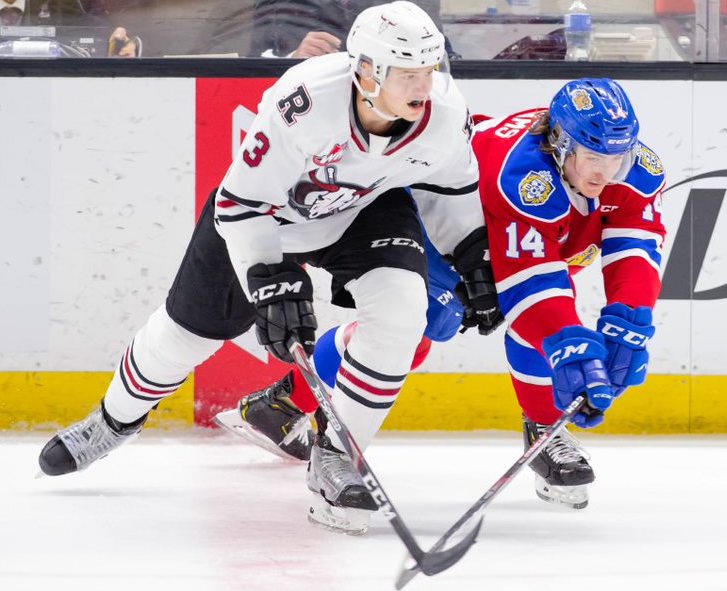 “The majority of a penalty kill is about effort, about a willingness to block shots, clear pucks and win faceoffs,” said Rebels assistant coach Ryan Colville. “And obviously you need goaltending and we got that. We got all the things we needed. The penalty kill is a mentality and we had the mentality tonight.”

As was the case in his first and only other start of the season — a 3-2 loss at Medicine Hat on April 19 — rookie Chase Coward was solid between the Rebels pipes. His excellent pad save on Jalen Luypen with just over four minutes remaining was a game-saver.

“He made a few big saves, including a big glove save on one of the kills,” said Colville. “He was great, he was steady . . . not a lot of rebounds. He made a lot of big saves for us which is what you need.”

Coward blocked all eight shots he saw in the third period, allowing the Rebels to seal the deal on an empty-net goal from Ethan Rowland with three seconds left.

“They definitely earned this one. I’m not sure there’s a guy on that bench who didn’t play a part in the win.”

The Rebels are in Calgary on Sunday for an afternoon engagement with the Hitmen, then close out their abbreviated season against the Hitmen on Tuesday at the Centrium.

“It feels good. All the boys are happy, the staff’s happy, so hopefully we can go into tomorrow and get another win,” said King.

Notable: Cossa made 21 saves for the Oil Kings . . . King was selected as the game’s first star, followed by Coward and Dowhaniuk . . . Red Deer was one-for-four on the power play . . . Overage forward Josh Tarzwell returned to the Rebels lineup despite being listed as week-to-week with a lower body injury. Colville was happy to have him back. “He brings another element. He’s a big, strong guy who pushes the pace and provides some offence for us,” said the assistant coach. “It was great to have him on the bench. He’s a good teammate, an uplifter, and honestly he gives us a little more balance. It was huge to have him back.” The Oil Kings were without their two top forwards in Dylan Guenther and Jake Neighbours. The Rebels were minus five regulars.