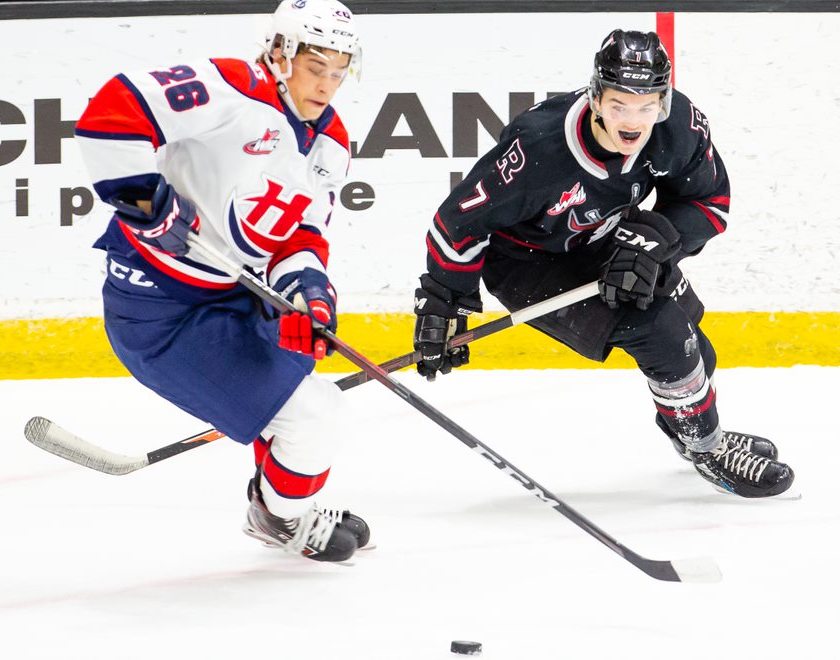 The Red Deer Rebels were not only battling an unplanned opponent on Friday at the Centrium, they were also battling adversity.

With their lineup already reduced to five defencemen due to injuries, the Rebels lost another rearguard during a 6-3 WHL Central Division loss to the Lethbridge Hurricanes, who replaced the Calgary Hitmen, a team that had a positive COVID test this week.

“It’s not like we’re not competing, not working,” said Rebels GM/head coach Brent Sutter, whose club suffered its 10th regulation-time setback of the season and seventh in a row. “That part is there, but we’re struggling in some areas we can be better at. I know that because the kids have played better in certain areas.”

With three defencemen already watching from the stands, the Rebels roster of rearguards was reduced to four when Trey Patterson went down with an injury.

“It’s hard, we were playing five defencemen, now we’re down to four, probably for the rest of our schedule,” said Sutter. “It’s a situation where we just have to try and fight through it, keep our chins up, keep battling and make sure we stay to our structure as best we can so we can at least rely on our team play, our systems.”

The visitors opened the scoring four minutes into the contest on a slapshot by defenceman Trevor Thurston that netminder Byron Fancy never saw.

Alex Cotton added to the ‘Canes’ lead with another screened shot at 6:35 of the middle frame, on the power play, and Noah Boyko made it 3-0 at 13:22, double clutching before burying a man-advantage volley from the right circle.

Rebels forward Ethan Rowland notched his first of two on the evening, beating goalie Carl Tetachuk through the five-hole just 14 seconds later, but Alex Thacker restored the ‘Canes’ three-goal lead on a power play deflection early in the third period.

“Three of their first four goals were power play goals,” said Sutter. “We had chances to get pucks out but didn’t get them out and down the ice. We turned it over and it was in our net shortly after.”

Dino Kambeitz and Cotton added to the Lethbridge total before the midway mark of the third before the Rebels closed out the scoring on goals from Josh Tarzwell and Rowland.

With Red Deer on the power play, Tarzwell took a feed from Arshdeep Bains and beat Tetachuk with a quick release from the high slot, and Rowland followed with the prettiest goal of the night, cashing in on a short-handed breakaway with a great backhand deke.

While the Rebels gained momentum with the goals, it was too late to prevent yet another setback. 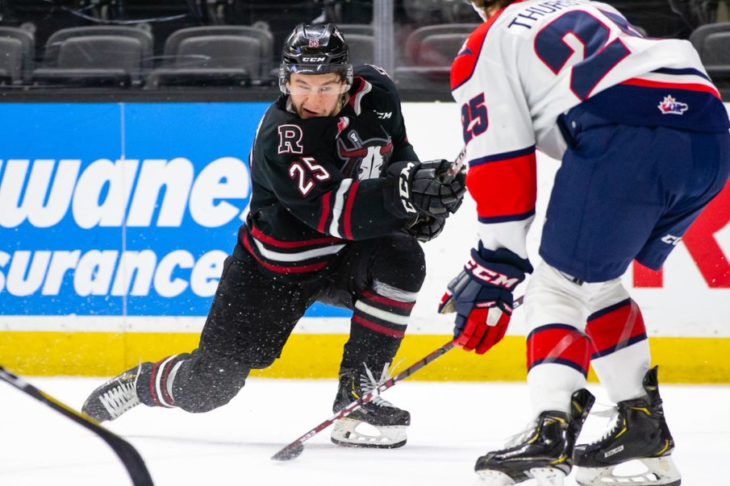 “It’s been a tough go, obviously. Not just in terms of confidence, but just the fact that some guys are having a tougher time that we thought they would and we’ve been playing short-handed with some good players out of our lineup,” said Sutter.

“We’ll have to change some things up now, being down to four defencemen. It’s a tough way to play with one 16, one 17 and two 18-year-olds. We might get one guy back possibly, but right now it looks like this is what we’re going to be going with for perhaps for the rest of our schedule.”

The rash of injuries that has sidelined D-men Chase Leslie, Blake Gustafson, Hunter Mayo and now Patterson, is almost inconceivable considering the Rebels have played a mere 14 games.

“We’ve had more injuries this year in a short period of time — in one position — than we had all of last season,” said Sutter. “We’ll have to change some things up with how we play, getting our forwards doing things different to support these young defencemen.

“We’re trying to keep the virus away and at the same time trying to find our way on the ice. When you’re battling that without a full lineup it can be a real mental challenge, but we just have to keep pushing and hopefully it will make us stronger.”

Fancy made 31 saves while Tetachuk stopped 28 shots at the other end.

The teams meet again on Saturday and Monday in Lethbridge.

“I told the kids after the game, let’s keep our chins up and keep fighting and battling here. It’s what we have to do,” said Sutter. “We have to start focusing on tomorrow night and getting ready to play.”

Notable: The Rebels suspected the Hitmen would be unable to play this weekend due to the positive COVID test and didn’t learn until Friday morning that Lethbridge would be their opponent. The ‘Canes were scheduled to play Medicine Hat, but the Tigers were also put on COVID watch after playing Calgary last weekend. “They (Hurricanes) have been off a couple weeks and we came through a tough series (versus Edmonton),” said Sutter. “I thought tonight would be a tough game with where we’re at with injuries. We had guys doing things they don’t normally do, like killing penalties. Gus (Gustafson) and Les (Leslie) are two of our top penalty killers and Patty (Patterson) had been good for us too. We don’t want to make excuses but we have to face reality. The kids are battling and playing hard but some mistakes are being made you wouldn’t normally see them make.”