Rebels have impressive start but fall 5-2 to Hurricanes 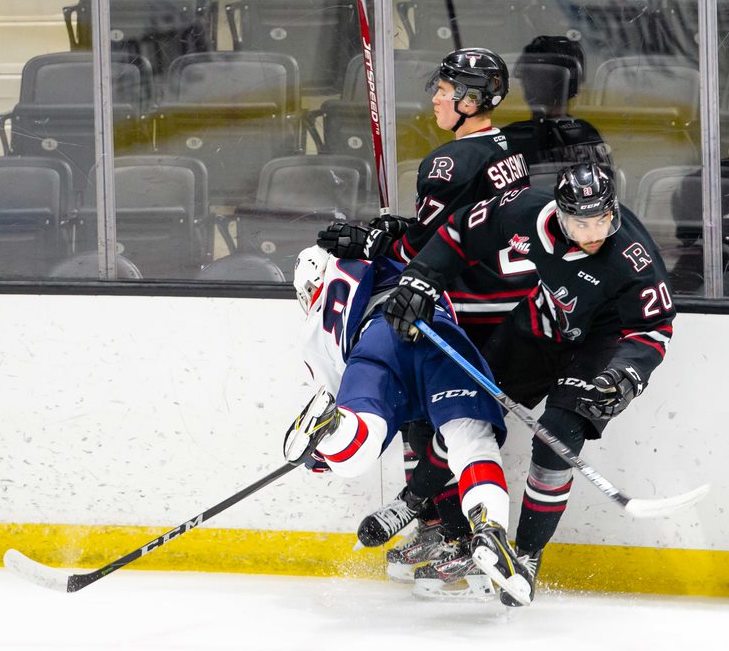 LETHBRIDGE — A strong start didn’t generate a positive result for the Red Deer Rebels on Saturday.

The Rebels bolted out of the starting gate and notched the game’s first goal, but the Lethbridge Hurricanes pulled ahead by the end of the opening period en route to a 5-2 victory.

“I thought we played hard. I thought the group had a lot of energy tonight,” said Ryan Colville, who along with fellow Rebels assistant coach Brad Flynn handled bench duties following head coach Brent Sutter’s resignation earlier in the day.

“Obviously it was a difficult day, but I was happy with the way we came out with some jump, with some energy.”

Rebels rookie Jhett Larson roofed a rebound for his first WHL goal six minutes into the contest, but the ‘Canes pulled even at 11:29 with a power play marker from Justin Hall on a one-timer from the left circle.

Liam Kindree buried a backdoor feed from Hall in the final minute of the period and the hosts never surrendered the lead the rest of the way.

Logan Barlage scored into a gaping cage early in the second period when Red Deer goalie Ethan Anders was caught out of his net while attempting to beat a streaking Hall to the puck, and Noah Boyko made it 4-1 when he cashed a four-on-four rebound late in the frame.

Mason Ward pulled the Rebels within two in the final minute of the period, beating netminder Bryan Thomson with a release from the right circle after taking a nifty pass from Jaxsen Wiebe.

The Hurricanes put it away with their second power-play tally of the night at 13:54 of the third period, Boyko scoring from a scramble.

“It was another special teams game, that was the difference. But five-on-five we were working real hard,” said Colville.

The Rebels were under considerable pressure in the second period, no surprise since they were operating with just four defencemen due to injuries, but pretty much held their own the remainder of the contest.

“Our D played well, including Isley who hadn’t played that position at this level,” said Colville. ‘We were all really happy with the way he played.

“I thought our entire D worked hard. When you have only four regulars it’s definitely hard, but they all played well and our forwards worked hard for them.”

Anders was stellar for the Rebels, making 36 saves. Thomson stopped 32 shots at the other end and robbed Ben King — who struck two posts in the first two minutes of the game — on a pair of excellent scoring chances.

“Andy made one little mistake but he made some big saves for us,” said Colville. “We gave up quite a few chances and there were times when we were hemmed in our zone and Andy held us in.”

Lethbridge was two-for-five on the power play, while the Rebels failed to capitalize on any of their five man-advantage opportunities.

The teams meet again on Monday in Lethbridge.