Rebels hang on to secure ‘character’ win over Blades 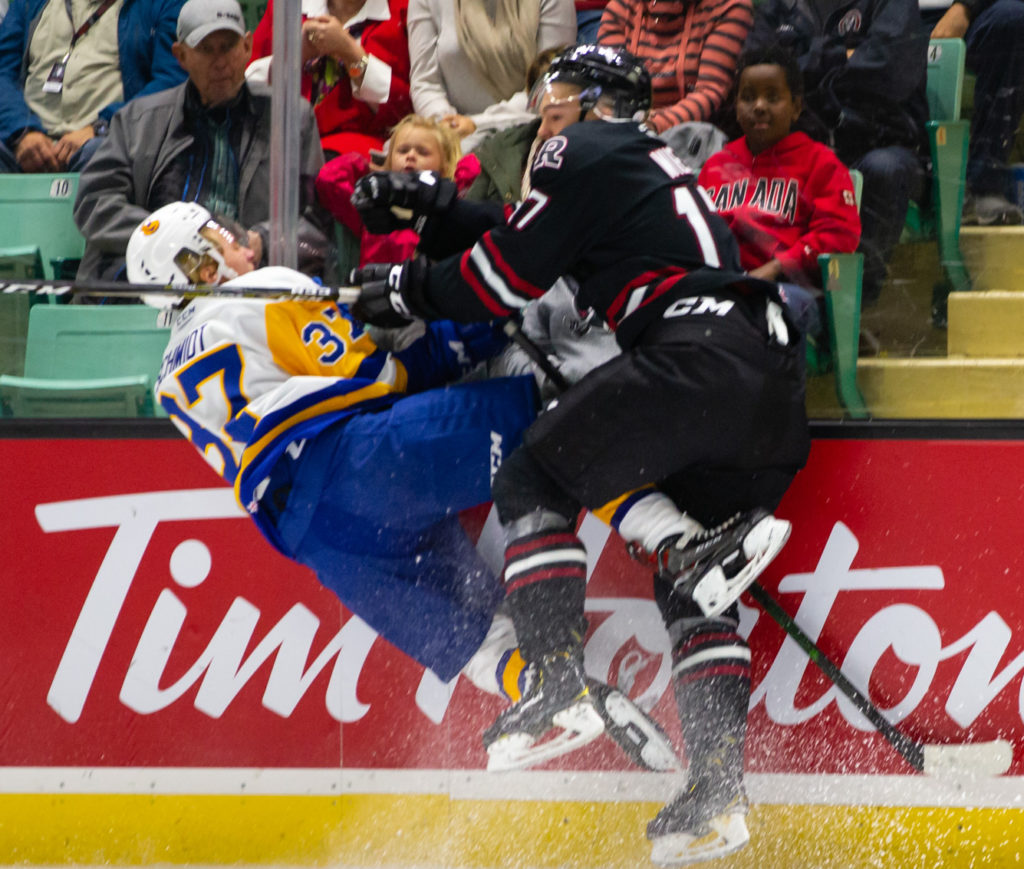 The Red Deer Rebels bent in the late stages of Tuesday’s WHL contest at the Centrium.

But, all importantly, they didn’t break, withstanding some late pressure from the Saskatoon Blades and pulling out a 2-1 victory before 3,334 fans.

“It was an awesome character win for us,” said veteran defenceman Ethan Sakowich, whose second-period goal, his first of the season, stood up as the winner.

“The game got tight, it got close, and just the way we were able to come together to keep that win . . . it was awesome.”

The Rebels were outshot 15-3 in a scoreless third period and were under siege in the dying minutes. The Blades, in fact, had two goals disallowed in the final five minutes, one for goalie interference and the second when a player knocked the puck into the net with an obvious high stick.

“It wasn’t as tense as you’d think,” said Sakowich, in reference to the late Saskatoon charge. “We kept it good on the bench, nice and light. It was just awesome the way the guys reacted to that. We stuck to our game and got the win.”

Aiding the Rebels’ cause was netminder Ethan Anders, who finished with 35 saves while delivering a top-flight performance.

“He was unbelievable again,” said Sakowich. “He’s always one of our best players, every game, night in and night out. He gives us a chance to win every night.”

The clubs were deadlocked 1-1 when Sakowich scored at 3:59 of the middle period, his shot from deep in the left circle beating Blades goalie Nolan Maier high to the short side.

“I closed my eyes, if I’m being honest,” Sakowich said with a chuckle. “No, it was awesome seeing the guys get that happy for me. I don’t do it too much so it was pretty cool.”

The fans were treated to a back-and-forth, high tempo contest, with the teams trading scoring opportunities almost equally through the first two periods.

“It was certainly a fast-paced game, there were scoring chances at both ends,” said Rebels GM/head coach Brent Sutter. 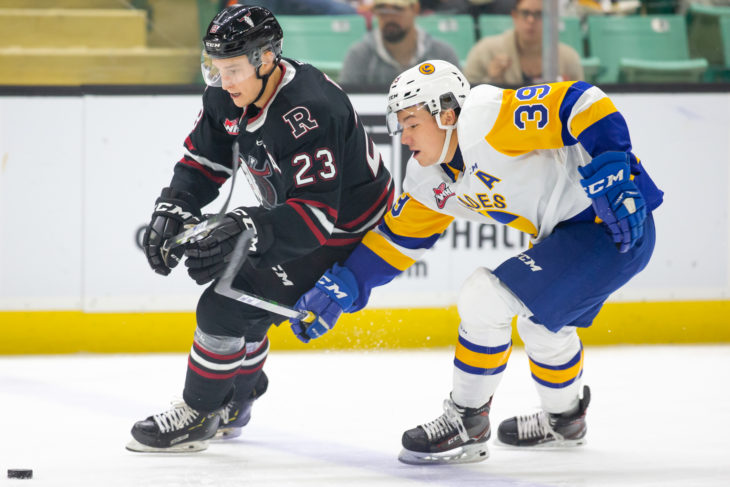 The Rebels were first on the board when Arshdeep Bains potted his first of the season, a power-play tally, 3:52 into the contest. The third-year forward, from the low slot, converted a perfect feed from Chris Douglas, who feathered the puck through a pair of opposition skates.

Riley McKay pulled the visitors even early in the second period on a give-and-go with Aidan De La Gorgendiere and the Blades started carrying the play until Sutter called his troops to the bench.

“We got off our game a bit before we took the timeout,” said the Rebels boss. “But we regrouped at that point and after that our second period was much better. And our first period was really good.”

“Wardo played great, he was really good,” said Sutter. “For the most part, as far as our overall game, it was much better tonight.”

In contrast to Saturday’s 5-1 loss to the visiting Calgary Hitmen, the Rebels were stingy with the puck.

“We had less turnovers, we were smarter with pucks,” said Sutter. “We did a better job of getting pucks behind the defence and forechecking the right way.

“We didn’t give up as many odd-man rushes as we had been.”

“We’ve been working on our power play,” said Sutter. “The power play always has to establish shots and our first power play after we scored the first goal I wasn’t crazy about.

“We got away from what we were supposed to be doing and got playing one-on-one hockey on our power play instead of moving pucks and getting shots through. In the second our power play was better again.

“It’s just stuff we have to continue to work on.”

“It was good. We went with four defencemen and four forwards,” said Sutter. “There wasn’t a lot of penalties on our side tonight so it allowed us to shorten our bench with the players, the penalty killers we rely on.”

The Rebels will head east Thursday for Friday and Saturday contests in Swift Current and Medicine Hat.

Rebels swing a deal with Raiders

Earlier Tuesday, Sutter acquired 17-year-old forward Cohner Saleski from the Prince Albert Raiders in exchange for a sixth round selection in the 2020 WHL bantam draft and a fourth round pick in 2021.

He suited up with the midget AAA Prince Albert Mintos last season, scoring nine goals and recording 28 points in 24 games, and also played four games with the Raiders, picking up a single assist.