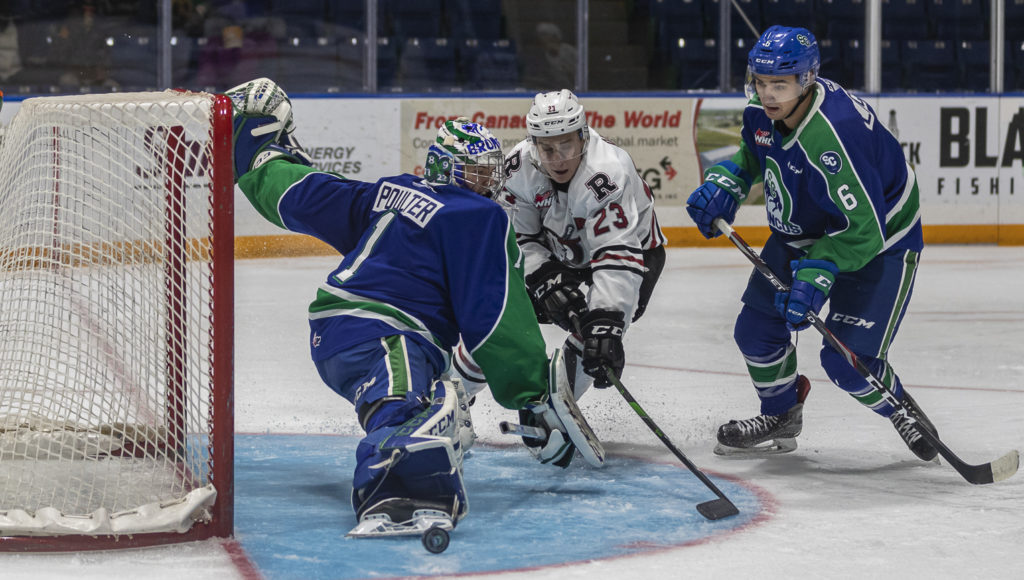 SWIFT CURRENT — The Red Deer Rebels, outside of the first five to six minutes, carried the play to the Swift Current Broncos in a WHL contest witnessed by 1,908 fans Tuesday at the Innovation Credit Union I-Plex.

For the Rebels though, it was all for naught, as Broncos netminder Isaac Poulter turned in a splendid 54-save performance in a 6-4 win over the visitors.

“We did a good job tonight of limiting them,” said Rebels assistant coach Bray Flynn. “We possessed the puck in their zone, we had good zone time.

“They capitalized on their chances and we didn’t capitalize on ours. But in saying that any time you put up over 50 shots and score four goals on the road you should win the game.”

The Rebels were slow off the mark as the Broncos struck for two goals in the first six minutes.

Former Rebel Justin Svenson was credited with his first-ever WHL goal on a fluke play, his shot deflecting off a Red Deer skate and past netminder Byron Fancy 3:48 into the contest, and Brecon Wood scored from a power-play scramble less than two minutes later.

To their credit, the Rebels dominated play the remainder of the period and pulled even before the intermission.

Jaxsen Wiebe ignited the Red Deer rally by tipping a Christoffer Sedoff point shot past Poulter at 15:08 and defenceman Dawson Barteaux rang a shot off the post and in a mere 23 seconds later.

Another former Rebel — albeit for a short time this season — Cohner Saleski notched his first of the season late in the second period to give the Broncos a lead they would not relinquish.

The hosts pulled away in the third despite being outplayed, as Jaxan Kaluski scored on a short-handed breakaway and Eric Houk connected with Fancy out of position.

Flynn, acting as head coach with Brent Sutter away on a reported recruiting trip, at that point replaced Fancy with 16-year-old Chase Coward, a Swift Current product and current midget AAA stopper signed by the Rebels last week. Coward was summoned earlier in the day with regular starter Ethan Anders listed as day-to-day with a lower body injury.

“On the fifth goal Byron was out of his net swimming a bit so we made the decision to take him out and let him refocus, bear down and let it go,” said Flynn.

“He had a few goals against the other night (seven in an 11-2 loss to Lethbridge) and this was his fifth goal against tonight. He needed to rest a bit and not let another one in.”

Fancy was back in after one shift.

“Coward is from here and had family here,” said Flynn. “Looking back on it we probably could have left him in if we knew the game’s outcome.

“But we wanted to give Byron the opportunity to shake off the last goal and help his teammates win a game.”

Sedoff brought the Rebels to within two goals when he lifted a backhand over Poulter during a Red Deer power play at 11:26 of the final frame, but Wood scored into an empty net with 1:33 left to basically seal the deal.

The Rebels got a late man-advantage marker from Arshdeep Bains but dropped their third game in succession and eighth of 11 in November.

“We were happy with the volume but our shots came from different places,” said Flynn. “Our dangerous chances . . . we out-chanced them in all three periods, but we have to bear down, capitalize and work on cutting back the other team’s chances.

“But we gave up only 22 shots over three periods so we were happy with our defensive play for the most part. But we allowed six goals which is a weird thing.”

The Rebels were set to return home following the contest and will host the Regina Pats Saturday at the Centrium.