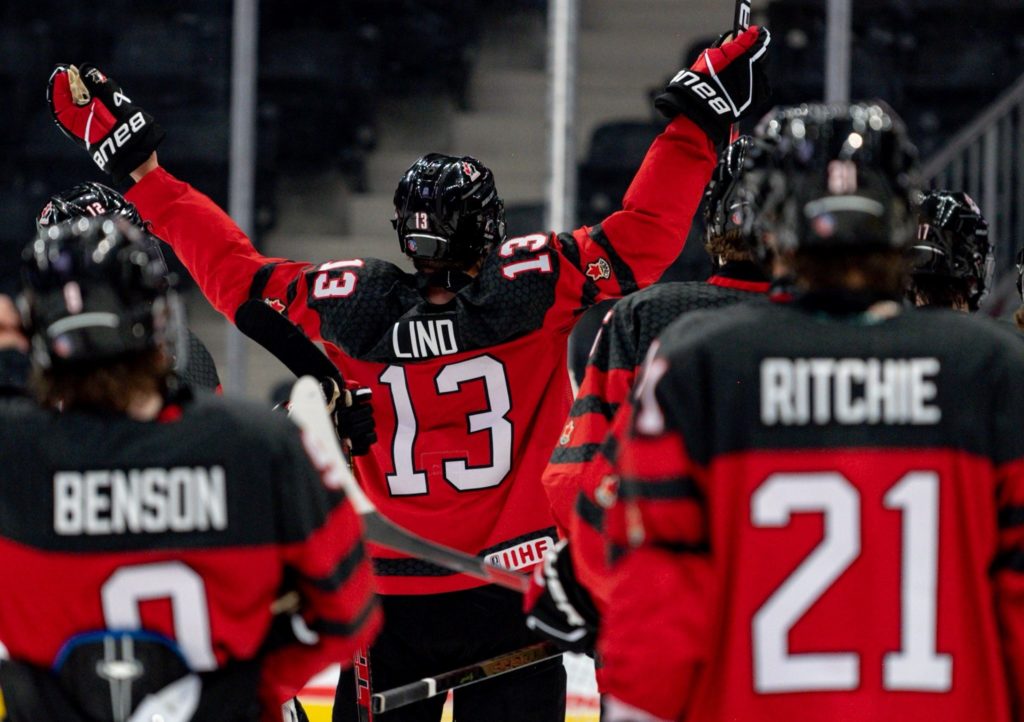 Kalan Lind took a page out of his portion of the Red Deer Rebels playbook Friday night at the Peavey Mart Centrium, scoring a goal from his office to help Canada swamp Finland 6-0 in a Hlinka Gretzky pre-tournament contest.

The Rebels forward stationed himself in front of the Finland net and tipped home a shot from Saskatoon Blades defenceman Tanner Molendyk to give Team Canada 3-0 lead near the midway point of the game.

“It was a good shot from Moles, a good tip-in shot,” said Lind. “That’s kind of my game, being in front of the net, and I took care of the opportunity.”

Lind (pictured above, Rebels file photo) started the play by breaking over the blueline and executing a nifty between-the-legs move with the puck.

“I kind of saw some space and thought I might try a little move there,” he said. “I tried the move and just missed the guy back door. The puck came to Moles, he came down the wall and had a really nice shot.”

The Canadians scored twice in each period, with the other goals coming off the sticks of Brayden Yager of the Moose Jaw Warriors, Denver Barkey (London, OHL), Mathieu Cataford (Halifax, QMJHL), Zachary Benson (Winnipeg Ice) and Tanner Howe (Regina Pats).

“I saw a lot of energy from our guys right from the start,” said Canadian head coach Stephane Julien. “We took the lead early in the game which gave us some momentum.”

“We took a lot of penalties, we’re not happy about it,” he said. “We talked about it before the game, so there’s something we have to fix right away. In a short term tournament like this, that can’t happen.”

Team Canada is expected to score at a steady pace during the tournament, which opens Sunday. But if Friday’s performance is any indication, the squad is well rounded, solid at both ends of the ice.

The Canadian defence moved the puck with authority and goaltenders Carson Bjarnson (Brandon Wheat Kings), who started, and Scott Ratzlaff (Seattle Thunderbirds) shared the shutout with each making some excellent saves along the way. Bjarnson stopped 15 shots and Ratzlaff blocked 10.

“We had a really good game, Everyone was working and doing the right things,” said Lind. “We got pucks deep and were banging bodies . . . doing what we had to do to come out with a win.

“Our goalies were unbelievable, they gave us some big stops, and our D were moving pucks quickly, playing physical and just doing their jobs. Our forwards were helping out that way too, so we had an all around defensive game today.”

The coaching staff has been pleasantly surprised by the play of the Canadian netminders, from the start of the recent U18 camp in Calgary through to Friday’s win.

“Since Day 1 our big surprise has been our goaltending,” said Julien. “Ratzlaff did a really good job today, Carson also. I can’t say they’ve had a bad day in a week and a half, so that’s a strength we didn’t expect.

“Not that we were expecting bad goalies, but there’s been a good compete level between the pipes and it’s good for us.”

“On Sunday there should be more fans in here, some more familiar faces,” he said. “It should be a good week.”

In the day’s first pre-tournament contest, Will Whitelaw, Connor Brown and Zack Sharp each tallied twice for the U.S. in a one-sided win over Slovakia.

Calvin Vachon and Hampton Slukynsky each made 10 saves to share the shutout as the Americans held a 41-20 advantage in shots.

Czechia got goals from Dominik Petr, Adam Csabi, Jan Kuchera and Eduard Sale, while Theo Lindstein and Kalbe Carlson replied in a losing cause,

Robin Rieke and Julius Sumpf replied for the Germans, outshot 38-33.