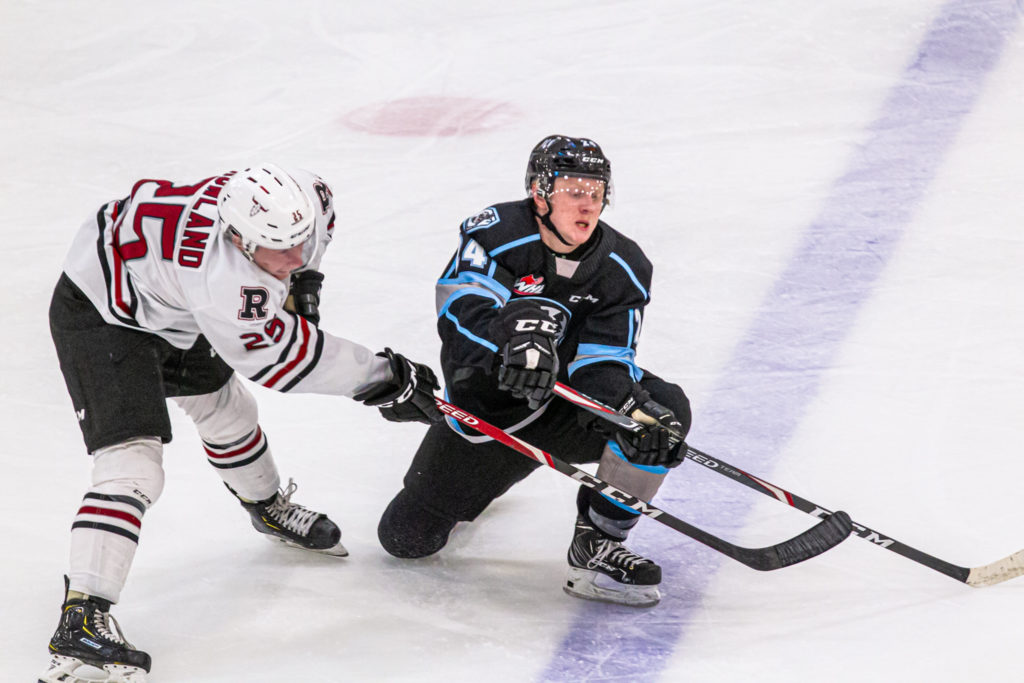 WINNIPEG, MB – Red Deer Rebels head coach/GM Brent Sutter isn’t one to use excuses, even when his team was playing their third game in four days and fourth in six, and the host team had been sitting since Saturday.

He just shook that off following a 5-3 loss to the Winnipeg Ice in WHL action before 1,278 fans at the Wayne Fleming Arena Wednesday.

“We don’t think that way, or use that as an excuse,” said Sutter. “I don’t believe it was a matter of wearing out we just took some bad penalties in the first two periods and made some mistakes we can’t make.”

The Rebels were shorthanded four times in the opening period and fell behind 2-0 while being outshot 17-8.

Nino Kinder opened the scoring at 3:51 with Brad Ginnell connecting with the first of his two goals, with just one second remaining in the period. Ginnell’s marker was on the power play.

Overall Red Deer did a good job of killing off the penalties, allowing just the one goal on six shorthanded situations.

“When you’re killing off so many penalties it’s tough to gain any momentum and when you do gain some momentum you lose it by sitting in the penalty box,” added Sutter, who was

upset by the type of penalties.

“Lazy penalties, stick penalties because we weren’t moving our feet,” he said.

But it wasn’t all negative for the visitors.

The Rebels got a power play of their own from Ethan Sakowich at 1:02 of the second period to get them back in the game. Mike Ladyman regained the two-goal advantage for the Ice at 13:44.

But once again Red Deer came out of the dressing room with some fire and Brett Davis connected at 1:14 and Jaxsen Wiebe at 2:15 of the third period to tie the score.

However, Czech Republic native and Chicago Blackhawk draft pick Michal Tepley scored what proved to be the winning goal with a bar down shot beating Red Deer netminder Ethan Anders at 11:31. Ginnell connected again at 12:35.

“We did a good job getting back in it then we had a couple bad reads,” added Sutter. “They were mistakes you can’t make. Some of them were made because of a lack of experience, things you get away with at a lower level. Here you get burned.

“Our positioning by the young and old needs to be better, it’s something we need to take more pride in, especially in our zone. Some of our older guys weren’t good enough either which hurts as they’re up against the other teams best players. They have to be good 200 foot players.”

Sutter asked if he was surprised by it all.

“No as we are young, but I thought a few guys would be a bit more committed and dedicated. But that’s growing pains and it will continue to hurt us until we do learn. And we’ll stick to it until we do.”

ICE CHIPS – Anders finished with 41 saves while the Rebels had 27 shots on Dean McNabb …Rebels were one-for-two on the power play … Tepley was the first star with Kinder second and Ginnell third … The Rebels had opened their six-game, nine-day road trip Friday with a 5-2 loss at Moose Jaw before snapping a seven-game losing streak with a 3-2 win Sunday at Regina. They lost 5-2 to Brandon Tuesday … On other side the Ice have won six of their last eight games and sit at 9-6-1-0. Red Deer is 5-10-0-2. … Rebels visit Saskatoon