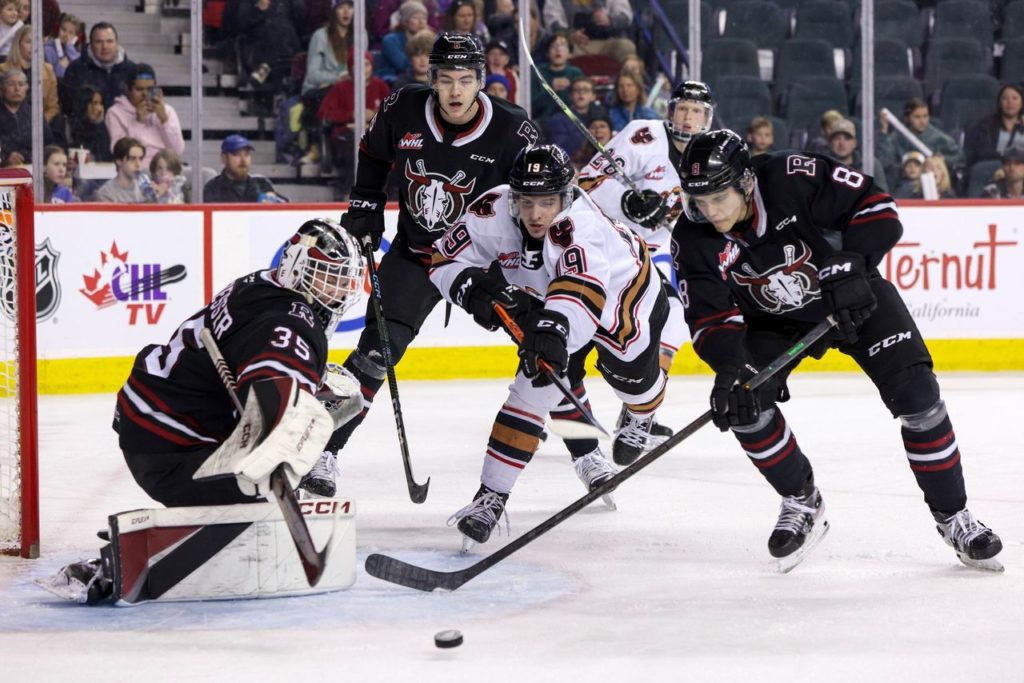 CALGARY — Heading into Sunday’s WHL clash with the Calgary Hitmen, the Red Deer Rebels had lost just once this season when scoring first.

That pattern took a rare hit in the afternoon contest at the Scotiabank Saddledome, as the host Hitmen — losers of their four previous outings — overcame deficits of 1-0 and 2-1 en route to a 4-2 WHL victory before 4,981 fans.

The visitors opened the scoring 7:35 in when Jayden Grubbe won a faceoff back to Jace Isley and the overage forward wristed a high shot past netminder Brayden Peters.

The Rebels had plenty of opportunities to build on the first-period lead, but Peters made a series of excellent stops, including a glove stab on Ben King, a pad stack on Kai Uchacz and a kick save on Frantisek Formanek.

The Hitmen took advantage of their netminder’s heroics by evening the count with four seconds left in the frame as defenceman Grayden Siepmann beat goaltender Rhett Stoesser with a 40-foot wrister through a crowd.

“In the first with a team like that, maybe they’re a little fragile and if you can get a couple on them and get a bit more of a lead, then I think you might break their will,” said Rebels head coach Steve Konowalchuk.

“But instead they hang around, their goalie keeps them in the game and then they get some life.”

The Rebels restored their lead with a power-play tally 1:45 into the middle frame when Grubbe took a feed from Kalan Lind and from the left circle beat Peters to the short side.

But that was it for the Rebels, who were assessed three minor penalties in the period and watched their one-goal cushion turn into a deficit as Matteo Danis and Sean Tschigerl — the latter on the power play — scored for the home side.

Danis broke to the net and deflected a corner pass from Tschigerl past Stoesser at the 16:30 mark and Tschigerl connected with a wrist shot from the left circle less than two minutes later.

“If you’re up by a couple in the first period maybe it opens the game up a bit,” said Konowalchuk. “But it didn’t happen and we needed to be better in the second . . . some penalty trouble and some casual moments.

“We got behind the eight ball and in the third we were chasing and we couldn’t come back this time (following Saturday’s dramatic come-from-behind win over Brandon).”

The Rebels held a wide 14-3 advantage in shots in the third period and applied some heavy pressure in the waning moments, but couldn’t get a puck past Peters except for a disallowed goal by Lind.

The Hitmen, meanwhile, got what proved to be an insurance marker from London Hoilett.

The Rebels also lost the special teams war as their hosts were two-for-six on the power play while Red Deer was one-for-seven.

“At the end of the day we gave up two power-play goals. You want to win the special teams battle and we didn’t,” said Konowalchuk.

The Rebels had won the previous five meetings between the clubs this season but came up short in the sixth outing.

“They’re a good hockey team, they played well with structure,” said Konowalchuk. “You knew they’d be kind of in a desperate mode today with losing a few games (recently).”

Notable: Peters made 32 saves while Stoesser blocked 20 shots . . . The three stars: (1) Tschigerl, (2) Grubbe and (3) Peters . . . The Rebels are idle until Friday when they host the Saskatoon Blades. The Winnipeg Ice visit the Peavey Mart Centrium 24 hours later.