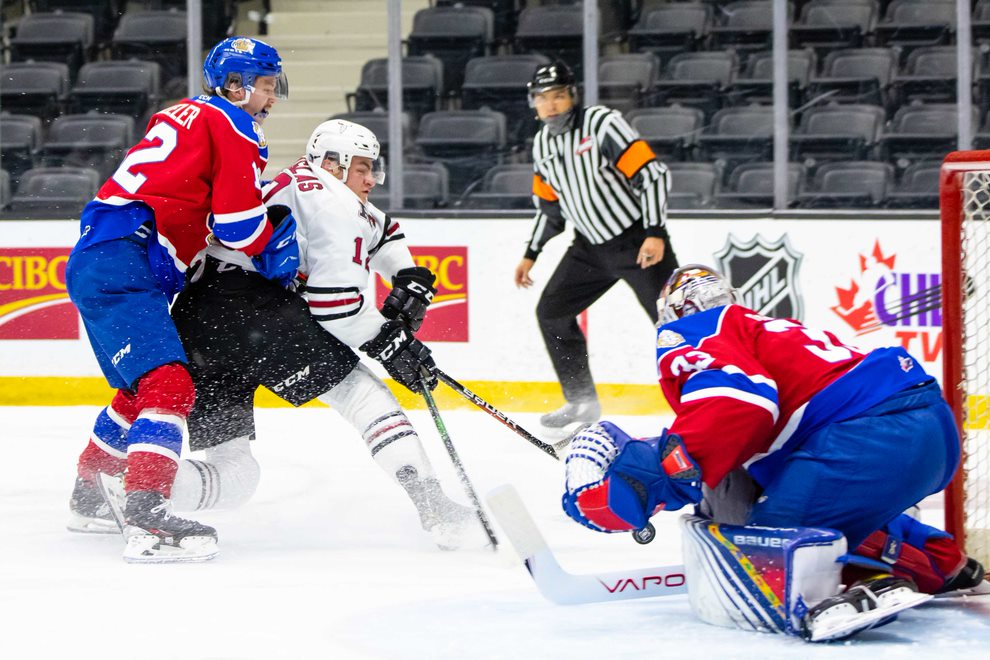 EDMONTON — Brent Sutter had seen this act before.

Several times in fact, and all of them within the past few weeks.

Once again, the Rebels did their best to keep pace with the Edmonton Oil Kings, but once again they came out on the short end of a WHL Central Division game, falling 5-1 on Saturday.

“It was similar to some of the other games against them,” said Rebels GM/head coach Brent Sutter following the contest at the Downtown Community Arena.

“I thought we competed, battled and worked. But we make those young kids mistakes that you can’t make at this level, especially while playing against their best players.”

As was the case in Friday’s 9-2 loss to Edmonton, the Rebels struck first as rookie D-man Jace Weir fired a rising wrist shot from just inside the blueline that beat netminder Sebastian Cossa through a crowd at 5:41 of the opening period.

The lead was short-lived, however, thanks to a lucky break for the hosts. While on the power play, Liam Keeler threw a puck out front that deflected off the skate of Red Deer’s Mason Ward and trickled over the line.

Dylan Guenther notched the winner late in the period on a play that Sutter was convinced was well offside, converting a two-one-pass from Josh Williams.

“Their first goal went off a stick, an unlucky bounce for us, and their second goal was two feet offside. The linesman missed the call,” said Sutter.

Carter Souch scored Edmonton’s third goal late in the second period and the Oil Kings put it away with a pair of third-period tallies off the sticks of Kaid Oliver, who converted a back-door feed from Jake Neighbours, and Jalen Luypen, who buried a centering pass from Keeler.

“The last two goals our forwards stopped backchecking at the top of the circle and allowed odd-man rushes to happen,” said Sutter.

Byron Fancy made 27 saves for the Rebels, including impressive stops on Neighbours in the first period and Souch in the final 20 minutes.

Cossa turned aside 20 shots at the other end. He got his arm on a labelled shot by Ben King in the second period and later stoned Josh Tarzwell on a two-on-one break.

“We had some scoring chances that we didn’t capitalize on,” said Sutter. “We have a power play with the score 3-1, get one shot on net and the very next shift they go down and score a goal.

“It’s been quite apparent that we don’t score easy. We have to get some contributions offensively from certain guys.”

Notable: The win was Edmonton’s fifth in as many games against the Rebels this season and their 16th consecutive regular-season victory over Red Deer. The teams meet for the final time this spring on Monday at the Centrium . . . Kyle Masters returned to the Rebels lineup after missing three games due to injury, but rookie Hunter Mayo suffered what could be a long-term upper body injury during the last shift of Saturday’s game. With Blake Gustafson and Chase Leslie likely out on a week-to-week basis, the Rebels’ roster is down to five defencemen . . . Brandon Sutter, a former Rebel and Brent’s son, has contracted a variant form of COVID, one of at least 14 Vancouver Canucks players diagnosed with the virus. “He’s moved to his basement,” said Brent. “He said he has chills and just feels achy. Brandon said the team won’t play for at least another two and a half to three weeks, if they play at all. Really, hockey is not important at this point.”