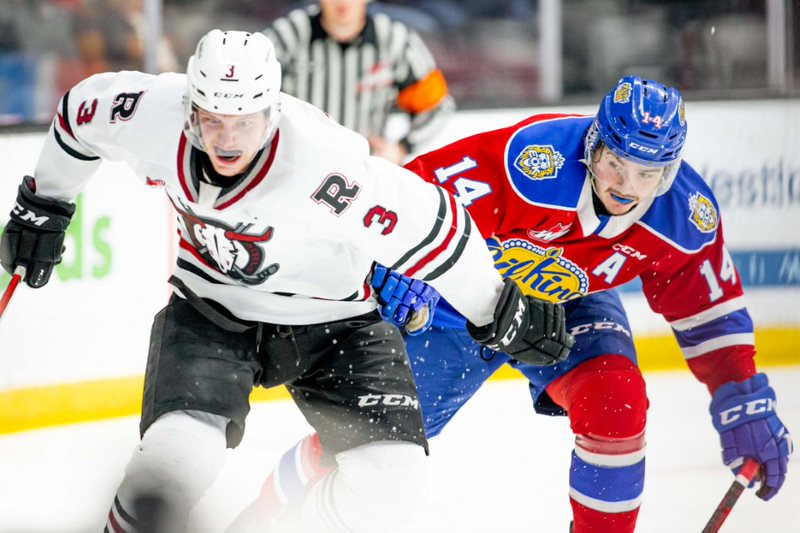 The Red Deer Rebels were behind the proverbial eight-ball before the puck was dropped for Game 3 of their WHL Eastern Conference semifinal with the Edmonton Oil Kings.

Already down 2-0 in the best-of-seven series, the Rebels were minus two pivotal defencemen in Christoffer Sedoff, out with an upper body injury, and Jackson van de Leest, serving a one-game suspension as supplemental discipline for being assessed a minor charging penalty late in Game 2.

And yet, after being shut out in each of the first two losses, they turned in their most determined performance of the series in Monday’s third game despite dropping a 5-4 overtime decision before 3,506 fans at the Peavey Mart Centrium.

“We were down two of our top defenceman. I love the character of our team. That’s what we’ve done all year,” said Rebels forward and former Oil King Liam Keeler, in reference to Red Deer’s two-goal comeback late in regulation time to force the extra period.

“We’re never out of it, we’re never done. It’s the same thing in this series. We’re not done yet, we just have to keep pushing.”

The visitors, who fired 52 shots at Rebels netminder Connor Ungar all told, pushed the pace in overtime, finally cashing in just past the seven-minute mark when Jake Neighbours hauled in a stretch pass from Luke Prokop and scored on a breakaway.

“It’s a tough loss. You get into overtime and get that one it’s sure a better feeling,” said Rebels head coach Steve Konowalchuk.

“I told the guys before the game that we just wanted to make sure everyone was playing with all the heart and character we have and I believe everyone did. Everybody played to the end. They didn’t give up.”

Down 4-2 with less than eight minutes remaining, the Rebels pulled to within a single goal when Arshdeep Bains took a pass from Kalan Lind in tight and swept wide on goaltender Sebastian Cossa before tucking the puck in the corner.

The Oil Kings appeared to answer back less than a minute later when Kaiden Guhle deposited a shot from the top of the left circle, but following a video review it was waved off due to a high stick earlier in the play.

Just 17 seconds later, Jhett Larson ended an impressive shift by storming the net during a scramble and chipping the puck past Cossa for the game-tying tally.

“That’s the kind of character our team showed all year,” said Konowalchuk. “They didn’t throw in the towel. They battled through some adversity and we had a chance.”

Prokop opened the scoring just 1:55 into the contest when his wrist shot from the point worked its way through a crowd and found the top of the net.

Keeler pulled the Rebels even near the mid-point of the first period while on the power play. Ben King fed Bains, whose shot was denied by Cossa who kicked out a rebound that was buried by Keeler at the side of the net.

The visitors appeared to take control of the contest with a pair of second period goals at 6:32 and 15:56 respectively. Dylan Guenther connected on a corner pass from Carter Souch, and Souch, on the power play, scored from deep in the right circle for a 3-1 Edmonton lead. 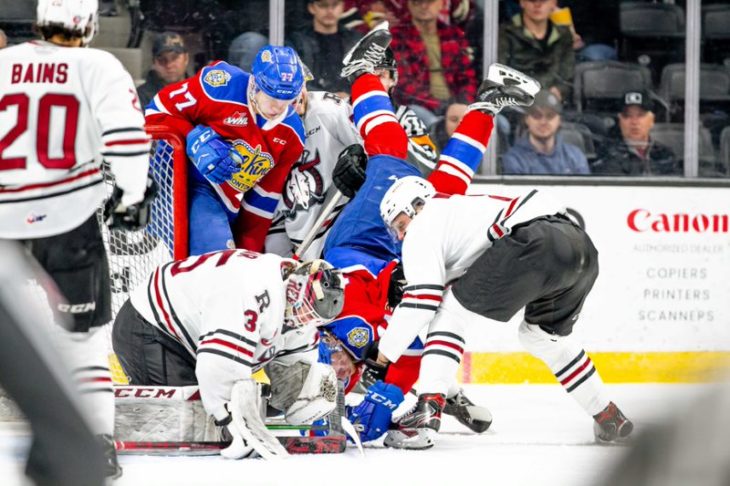 Lind, with an absolute snipe from 40 feet out, replied for the Rebels with less than two minutes left in the period, but Justin Sourdif restored Edmonton’s two-goal lead with a short-handed tally 7:38 into the third, setting the stage for Red Deer’s late regulation time rally.

“We were missing a couple of key guys on the back end, but the guys we had back there battled hard,” said Konowalchuk, who had to use forward Jace Isley on defence. “It was just a matter of finding a way, finding a way to battle and we had a chance.”

Game 4 of the series is set for Wednesday at the Centrium.

“It is what it is. There’s no time to feel sorry for yourself,” said the Red Deer bench boss.

With their season hanging in the balance, the Rebels obviously face a long road back. They certainly have no room for error.

“We have tomorrow to try and regroup and try to figure out what we can do better,” said Keeler. “We have to take this one game at a time. We’re not out of this, we just have to keep going.”

Unger got the call for the Rebels with Games 1 and 2 starter Chase Coward unavailable due to an upper body injury and turned aside 47 shots. He was sharp all evening long and absolutely robbed Jakub Demek of a goal with a fabulous sliding pad save early in the third period.

“He was very good,” said Konowalchuk. “And all of the guys who got extra ice time (due to the absence of Sedoff and van de Leest) played well.

“The guys battled and that’s all you can ask for. Now we have to be positive and do everything we can to get the next game.”

Notable: Cossa, a first-round pick of the Detroit Red Wings in last year’s NHL entry draft, made 18 saves . . . The Rebels were one-for-six on the power play, the Oil Kings one-for-five . . . The three stars: (1) Souch, (2) Bains and (3) Neighbours . . . If the Rebels emerge victorious Wednesday, a fifth game will be played Friday in Edmonton.