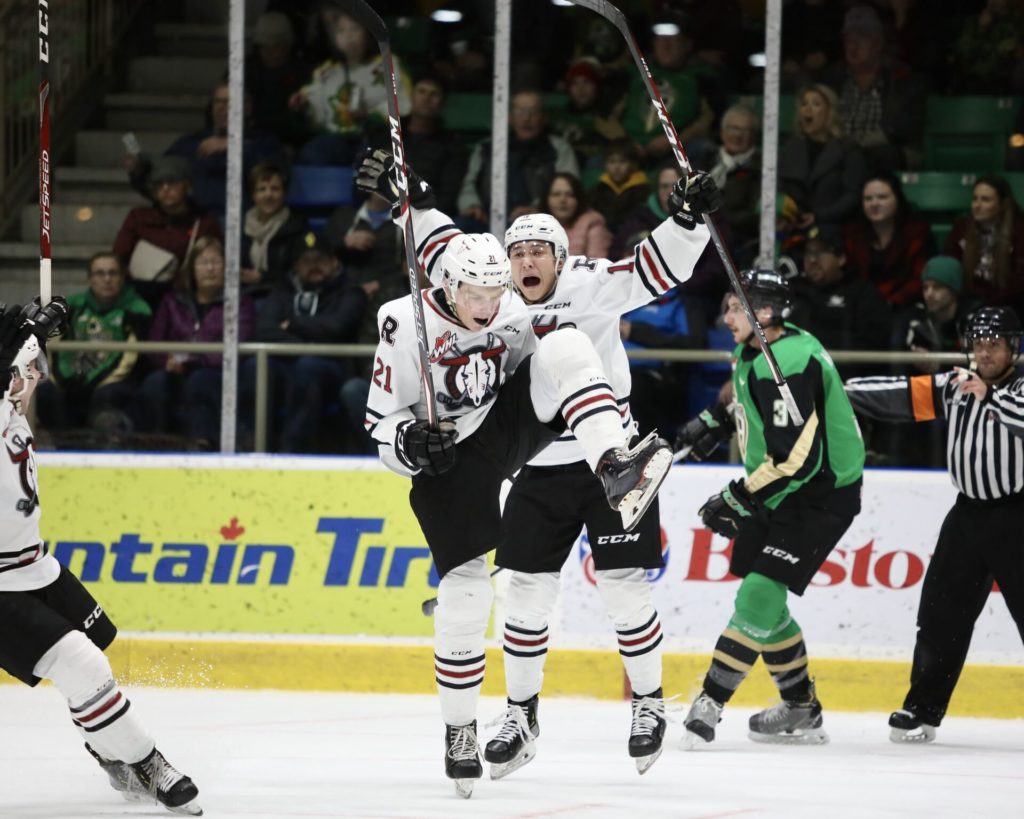 PRINCE ALBERT, SK – The Red Deer Rebels showed some of what the future may hold as they put the finishing touches on a six-game, nine-day WHL road trip in style.

The Rebels turned in their best performance of the trip downing the second-ranked team in the country, the Prince Albert Raiders, 3-2 before 2,785 fans at the Art Hauser Centre Saturday.

“It was a solid game,” said Rebels head coach/GM Brent Sutter. “We got some big saves (from Ethan Anders) but everyone contributed.

“We were focused and played a complete game..I believe if we play hard and if we’re focused everything else will come with it.”

It was a game that you could have almost understand if the Rebels, who were 1-4 on the trip, looked at the game with the idea of just playing it and finally getting home.

But no one had that in mind.

“We were certainly focused, you could tell that throughout the day,” said Sutter. “We discussed as a group that we didn’t want to go home with only two points. We knew we were playing a very, very good team and we had to make sure we responded the right way.”

They did just that.

Despite falling behind 1-0 in the first period on Aleaksei Protas’ 13th goal of the season, at 4:52 and being outshot 11-5, the Rebels never faltered.

Chris Douglas tied the game with his fifth goal of the season, an unassisted marker, at 9:53 of the second period.

Dawson Barteau gave the Rebels a 2-1 lead with his fourth, on the power play at 4:22 of the third period.

Brayden Watts notched his 10th of the season while shorthanded at 12:24 of the third period, but the Rebels dug a bit deeper. Dallon Melin got the winner, his third of the season and second in two games, just 1:03 later – two seconds after the penalty elapsed.

The Rebels turned in an impressive third period, holding the Raiders to just six shots.

“I thought we got stronger as the game wore on, but really the whole night we were dialed in with our assignments … just the way we have to play,” said Sutter.

Anders was selected the game’s first star, finishing with 31 saves.

“We got some big saves for sure, but to a man everyone was good,” said Sutter. “I’m happy … proud of the whole group.”

Sutter had special praise for the line of Melin, Jace Isley and Ethan Rowland.

“That line brings a lot of high energy and emotion. We need that from them. The three of them are all different but they played with energy and that was a huge goal.”

The fact the Rebels had the extended road trip may be just what they needed as one of the youngest teams in the league continues to grow as a team.

“Every day we hopefully do things a little better,” said Sutter. “Being on the road and with this much time together does bring them closer. Any time you’re on the road, have some success and finish the way we did, hopefully it works in the right way.”

ICE CHIPS – The Rebels finished with 27 shots on Raiders goaltender Carter Serhyenko, who was making his fourth start of the season … Red Deer was one-for-four on the power play and killed off all four penalties … Watts was the game’s second star with Melin third … Newcomer Ben King drew an assist on Barteau’s goal … Rebels have close to a week off before hosting Medicine Hat, Nov. 15.