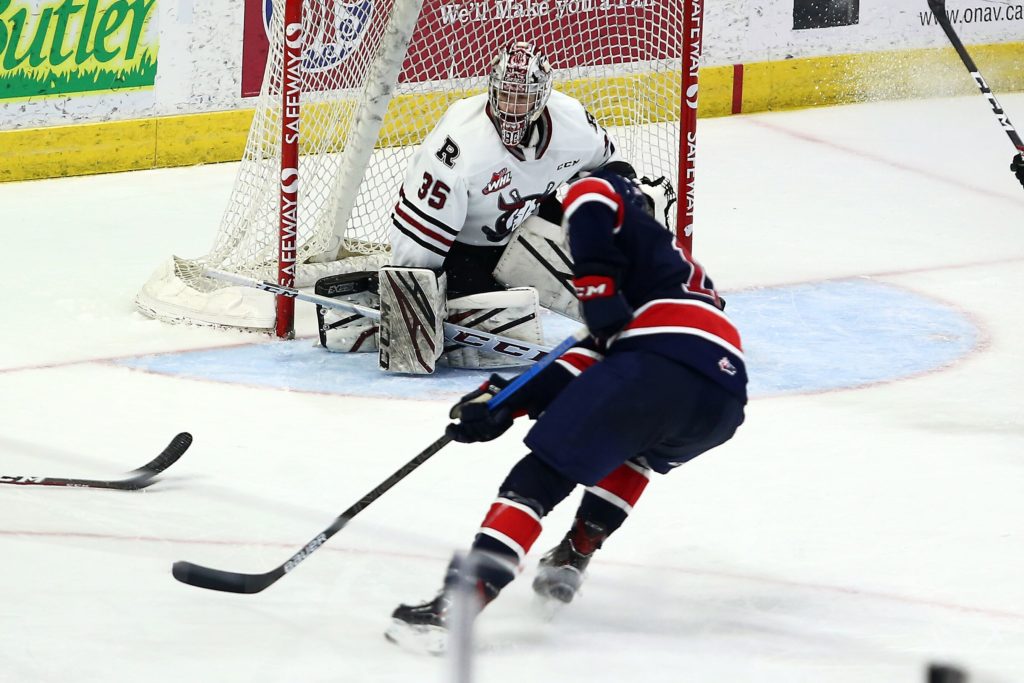 REGINA Sask. – It didn’t come as any surprise to see the Red Deer Rebels and Regina Pats going into extra time.

After all five of the previous 10 meetings between the two went into overtime, including their only previous clash this season – a 6-5 shootout win by the Pats Oct. 19 in Red Deer.

So when the Pats tied the game Sunday with goaltender Max Paddock on the bench no one was shocked.

But this time it was the Rebels celebrating as Ashdeep Bains scored his second goal of the season just 48 seconds into the five-minute extra period to give the Rebels a 3-2 victory before 5,688 spectators at the Brandt Centre.

The win snapped a seven-game losing streak and evened the Rebels record at 1-1 on their six-game road trip and left head coach/GM Brent Sutter in a positive frame of mind.

“It was a solid road game,” he said. “It was pretty even with both teams having the momentum at times.

“I thought we did a good job of positional play … we took some not so good penalties at times, but overall we were solid.”

One of the bright spots was goaltender Byron Fancy, who finished with 25 saves for his first win of the season.

“Our goaltender was good for us,” agreed Sutter. “Recently we’ve talked about our penalty kill not being good and some of that has to do with the goaltenders not coming up with the saves when we need them.

“Today Byron was good. He had no chance on their goals. One was a fluke when it bounced in off the mask of one of our defencemen. Can’t do much about that.”

The Rebels never trailed. After a scoreless opening period, with the teams splitting 14 shots. Chase Leslie opened the scoring for the visitors at 519 of the second period with an unassisted maker. Zack Smith tied the game at 14:17.

Fancy was especially strong in the middle stanza with 14 saves while the Rebels managed nine shots.

The third period was mainly dominated by the Rebels, but they couldn’t beat Paddock until Josh Tarzwell found the five-hole at 18:37 after a faceoff win by Cameron Hausinger.

It appeared as if the Rebels would ice the game with Paddock on the bench but a Regina defender knocked the puck off Brett Davis’ stick before he could fine the open net.

The play proved to be big as the Pats came back and former Rebel Austin Pratt scored his eighth of the season on a scramble with 40.7 seconds remaining.

Sutter indicated the late goal is something the young team still needs to work on.

“We’re always going to be in tight games and we have to know how to play in our zone in that last minute to a minute and a half,” he said. “We just got out of position and it was in the net.”

Red Deer managed the only shot in the overtime. Dawson Barteau brought the puck in on the right side crossed behind the net giving the puck to Bains, who was cutting the opposite way. It fooled Paddock and left an open side..

The fact the Rebels didn’t fold after giving up the late goal was another plus in the game.

“We’ve actually been playing well in the last four or five games, but seemed to always do one little thing and we’d lose it,” said Sutter. “But tonight we were on the right side and our kids made several big plays which is important to us.

“Overall it was a good effort by everyone.”

Both netminders faced 27 shots. The Rebels killed off five penalties and were zero-for-two on the power play.

The Rebels continue their nine-day road trip Tuesday in Brandon. They visit Winnipeg on Wednesday, Saskatoon on Friday and Prince Albert on Saturday. They return home Nov. 15 against Medicine Hat.