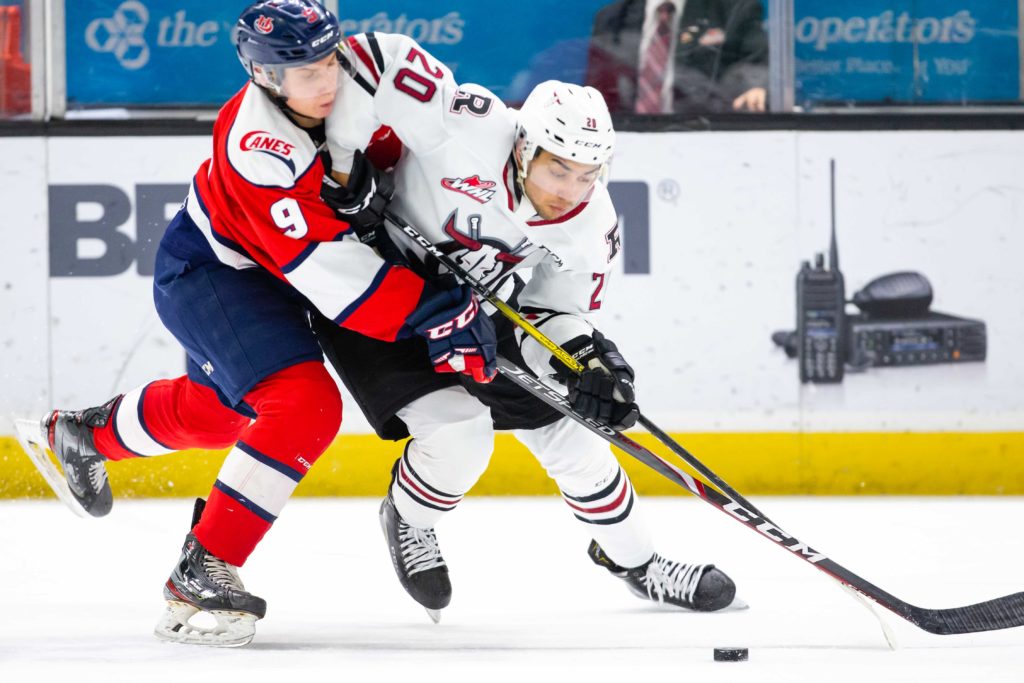 With the exception of last Saturday’s shutout loss at Calgary, the Red Deer Rebels have had no problems offensively in recent games, filling the net with regularity.

When it comes to defence, well, that’s another story altogether.

The Rebels surrendered two goals in the last three minutes of Wednesday’s WHL contest at the Centrium — after gassing a 4-1 second-period lead — and fell 7-6 to the Lethbridge Hurricanes before 3,225 fans.

Red Deer has now given up 31 goals in the last six games.

“Everything that we’ve been working on all year not to do we did tonight,” said a flustered Rebels GM/head coach Brent Sutter. “We talk about being a better defensive team and we give up seven goals. When you score six you should win the game.”

The Rebels coughed up the puck at their own blueline with 3:01 remaining and Dylan Cozens set up former Rebel Brett Davis for the ‘Canes’ sixth goal.

“If you’re not good in your own zone that’s what happens — you turn pucks over,” said Sutter. “We talked to our defence about moving pucks up the ice, but you try and carry it out, you turn it over and it’s in the back of our net.”

The Hurricanes got a last-minute goal from Davis — on a bullet from the hight slot — with Rebels forward Cam Hausinger serving a hooking penalty, then hung on for the win over the final 49 seconds.

“Look at the penalties we took tonight, just bad penalties,” said Sutter. “We take a bad penalty with a couple minutes left in the game because you’re not moving your feet. Everything we’re not supposed to do we did tonight. You get what you deserve.

“Like I told the kids just now, they’ve been shown it and told it in practice. If tonight’s game doesn’t show them I don’t know what does because tonight was ridiculous.”

The clubs were tied 1-1 after 20 minutes, with defenceman Alex Cotton scoring for the visitors with a quick release from the high slot, and Josh Tarzwell replying just under five minutes later, cutting around Cotton and beating netminder Carl Tetachuk with a wide deke.

From there, the second and third frames were somewhat frantic.

The Rebels fired three goals in the first half of the middle period before the ‘Cane struck for three of their own before the intermission.

Tarzwell notched his second of the night — on a power play — 5:24 into the second on a one-timer off a feed from Arshdeep Bains, and Ben King scored his first of two on the evening — and 12th of the season — at the eight-minute mark on a wrap-around with Tetachuk out of position.

That spelled the end for the Lethbridge starter, but replacement Bryan Thomson was victimized by Keaton Sorensen just over a minute later when the Rebels rookie cut wide across the low slot before potting his seventh of the season.

The Hurricanes were reeling at that point, but the momentum shifted when Red Deer rookie Ethan Rowland was called for roughing after a play at the Lethbridge net was whistled down.

The Hurricanes needed all of seven seconds of power play time to cut the deficit to two as Logan Barlage cashed a rebound.

“You lose your focus and take a bad penalty after the whistle. It’s just a selfish penalty,” said Sutter. “There’s no sense to it, it’s unacceptable.

Jett Jones, on the doorstep, jammed a pass from Ty Nash past Rebels netminder Byron Fancy at 12:49 and Cozens pulled the ‘Canes even at 18:34, beating Fancy from in tight after teammate Alex Thacker gloved down a Red Deer clearing attempt.

The third period was equally as chaotic with the teams combining for five goals. 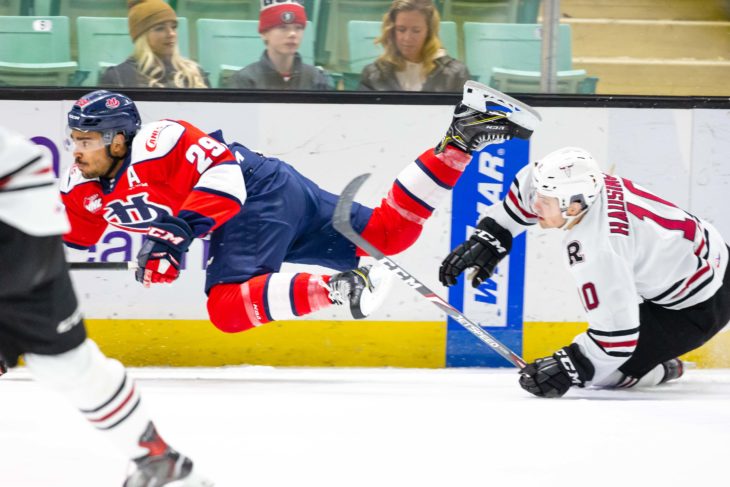 Zak Smith restored Red Deer’s lead exactly one minute in when he buried a backhand from low in the right circle, but ‘Canes blueliner Ty Prefontaine made it a 5-5 contest when his point shot deflected off a Rebels stick and past Fancy at 3:14.

King pushed the Rebels back in front on a nifty, two-on-one, give-and-go with Bains at 5:59. From there, the home side was presented with a glorious opportunity to build on the lead when Trevor Thurston was assessed a major penalty for kneeing and the ‘Canes were handed a simultaneous bench minor.

Red Deer, however, couldn’t taken advantage, partly due to the fact rookie forward Jayden Grubbe took an unsportsmanlike penalty during the power play.

The stage, at that point, was set for the ‘Canes’ late rally and Davis’ tying and winning goals.

“We were just trying to push back after a good five-minute penalty kill and happened to tie it up,” said Davis. “Then we were fortunate enough to get a power play. We had some good zone time and happened to get the winner.

“We didn’t have the start we wanted for sure, but we’ve done a good job of coming back in games. Moving forward, if we stay focused as a group I think we’ll be just fine.”

Davis admitted it wasn’t difficult to dial in against his former team.

“It’s weird because when I was playing with Red Deer it wasn’t hard to get up for games against Lethbridge,” he said.

Notable: Fancy finished with 32 saves. At the other end, Tetachuk stopped 12 of 15 shots and Thomson turned aside 15 of 18 . . . Selected as the three stars were (1) King, who had two assists to go with his two goals, (2) Davis, who added a helper for a three-point night, and (3) Smith, who garnered three points with a goal and two assists . . . Tarzwell was presented with a watch prior to the game as the Mitchell and Jewell Rebels player of the month for January . . . The Rebels return to action Friday against the host Edmonton Oil Kings, then take on the Calgary Hitmen the following evening at the Centrium.