Rebels come up short despite carrying play to visiting Pats 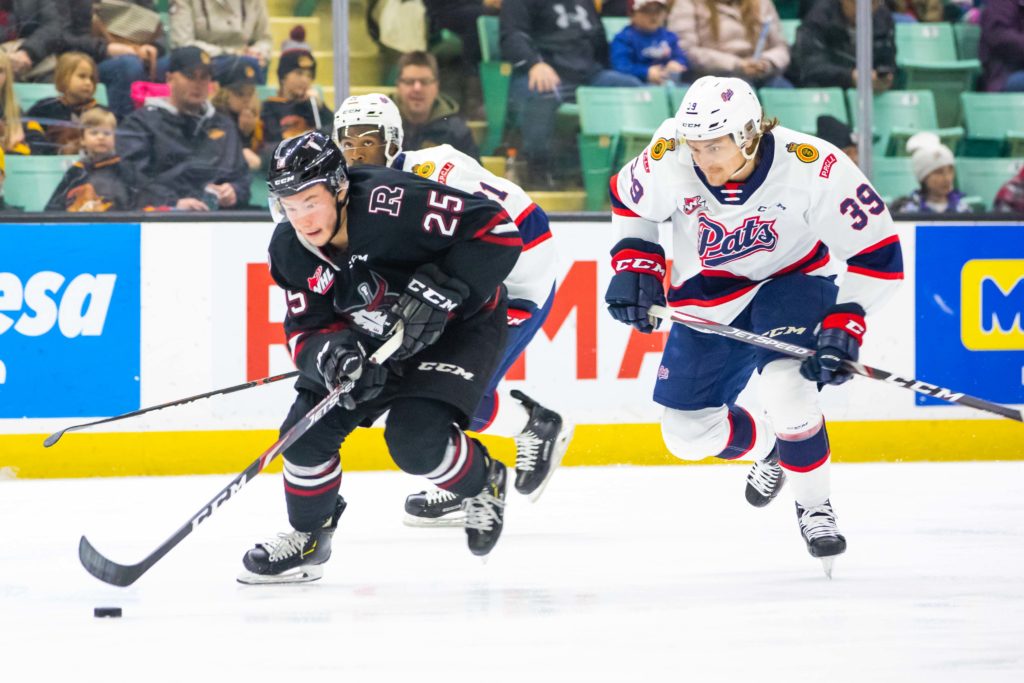 Justice was not served Saturday night at the Centrium.

“I thought we created a lot of offence, got scoring chances and were pretty good in our own zone too.”

It was a rough initiation for 16-year-old netminder Chase Coward, who was called up Friday and started the game with No. 1 stopper Ethan Anders still out with an injury and regular back-up Byron Fancy slated to get the call for a 4 p.m. contest Sunday in Calgary.

The Rebels, as a result, were down 3-2 after 20 minutes and trailed the rest of the way.

Ty Kolle took advantage of a blatant turnover inside the Red Deer zone and beat Coward bar down from close range just 1:51 into the contest.

The Rebels pulled even five minutes later when defenceman Ethan Sakowich moved in from the blueline and picked the far corner from the edge of the right circle. But Carson Denomie responded for the visitors on the next shift with a wrist shot from the left circle.

The Rebels again responded with Chris Douglas steering the puck past Paddock with his skate during a power play. The goal was initially waved off but was allowed to stand following a video review on the rule that a puck can be kicked in as long as the skate is outside the crease.

However, not even four minutes had passed when Kolle notched his second of the period, his goal coming from basically the same spot as Denomie’s. 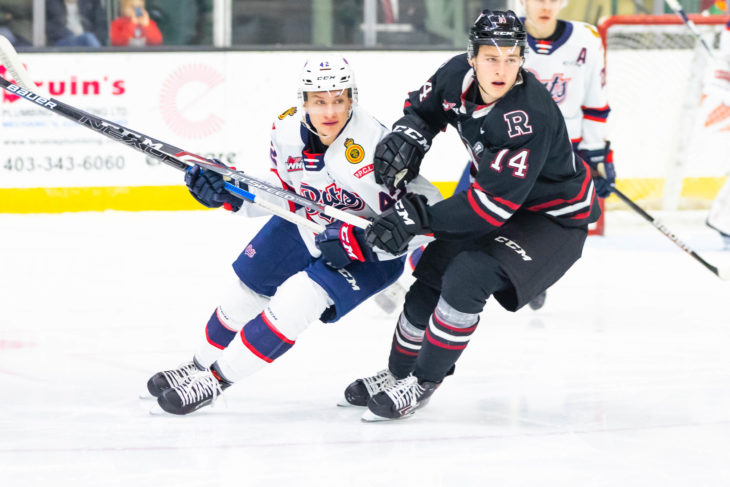 “It was a situation where we were in a tough spot tonight with another game tomorrow at 4 o’clock,” said Sutter. “It’s hard to play your veteran goalie so quick back to back.

Fancy relieved Coward at the start of the second period and gave up one goal on 18 shots. Pats overage forward Robbie Holmes scored from a scramble at 12:40 of the middle frame— a goal that required another video review — and the visitors led 4-2 after 40 minutes.

Cam Hausinger brought the Rebels to within one with a power-play tally five minutes into the final period, taking a drop pass from Jayden Grubbe and blasting a one-timer off the post and in.

But the home side was unable to draw even despite holding a 13-2 advantage in shots over the final 20 minutes.

“I was proud of our team tonight. I thought we played hard,” said Sutter, who liked the performance of the Hausinger-Grubbe-Josh Tarzwell line.

“They played well in Swift Current too,” said the Rebels boss, referring to last Tuesday’s 6-4 road loss to the Broncos in which Red Deer outshot their hosts 58-22.

“It’s a heavy line, they’re big guys who are hard on pucks when they’re moving their feet. That line played well but I thought everyone was good here tonight.”

Sutter couldn’t predict when Anders, out with a lower body injury, will return to the Rebels crease. The 19-year-old netminder could miss another three to four games.

Notable: The Rebels were minus the services of rookie forward Jaxsen Wiebe, who suffered an upper body injury in practice Friday . . . The three stars were (1) Kolle, (2) Douglas and (3) Sakowich. Douglas and Sakowich each had an assist to go with their goals, with the latter extending his points streak to three games in the process. Hausinger has also garnered a least one point in three straight outings . . . The Rebels were two-for-seven on the power play, the Pats one-for-three.