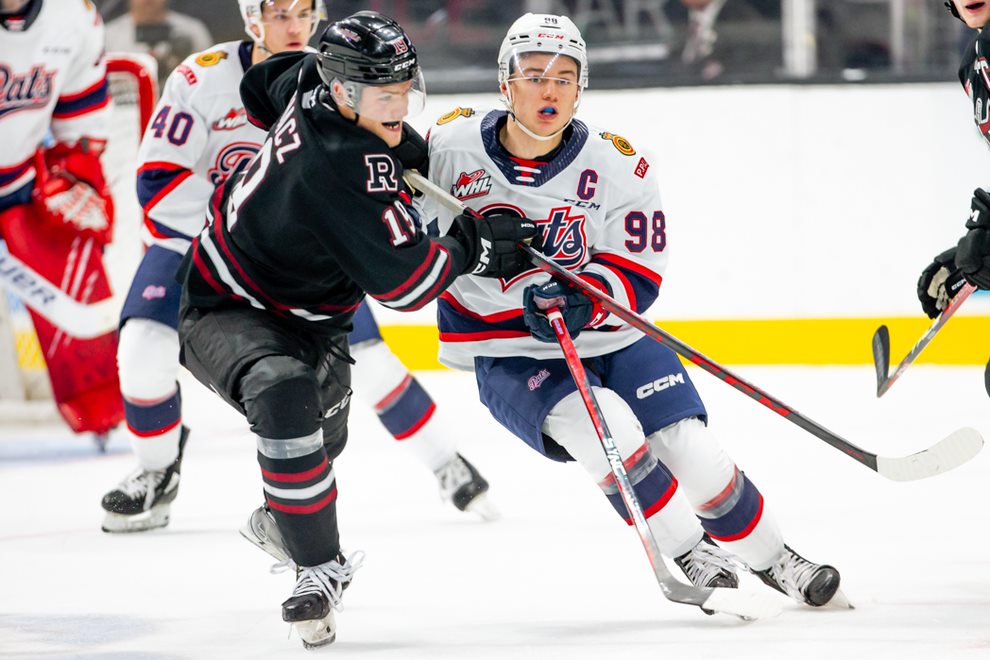 Stuck on 11 shots through two periods, the Red Deer Rebels matched that total and a little more in a desperate final frame push Saturday night.

The third period thrust led to a 4-2 WHL victory over the Regina Pats in front of a loud crowd of 4,806 at the Peavey Mart Centrium.

Kai Uchacz notched two goals and netminder Kyle Kelsey made 33 saves as the Rebels improved to 3-0-0-0 on the season.

“We did a better job in the third of getting pucks to the net,” said Rebels head coach Steve Konowalchuk, whose crew fired 12 pucks on Pats netminder Matthew Kieper in the final 20 minutes.

“We had a lot of O-zone time in the first two periods but we weren’t shooting. All of a sudden in the third we got pucks to the net and got a couple of bounces.”

The Rebels snapped a 1-1 tie when Uchacz notched his second goal of the game and third of the season midway through the final period, his seeing-eye wrist shot from the top of the left circle catching the back of the net through a screen.

The visitors drew even just over final minutes later when Borya Valis connected from a goalmouth scramble, but Rebels forward Carter Anderson responded within a 25-second span, sweeping a rebound past Keiper when the goaltender couldn’t get a handle on a shot by Christoffer Sedoff.

“Give Anderson credit, He started on the fourth line but he didn’t pout about anything and just went out and played,” said Konowalchuk. “It was a real good team effort.

The Rebels closed out the contest with an empty-net marker from Jace Isley in the final minute.

The line of Isley, Jayden Grubbe, who picked up two helpers in his first game after returning from the New York Rangers camp, and Uchacz was dominant while holding Pats superstar Connor Bedard to a lone assist.

“They were very solid. That line was up against the Bedard line quite a bit,” said Konowalchuk. “It was a tough challenge but they played well and played smart. It was a good job by them.”

Uchacz opened the scoring with a power play goal late in the first period, beating Kieper with a wrist shot from the right circle.

The Pats pulled even with a second-period man advantage marker off the stick of Easton Armstrong, who tipped a point shot by Stanislav Svozil past Rebels goaltender Kyle Kelsey, setting the stage for a frantic third period.

“We came out after the second intermission knowing we had to close this one out,” said Uchacz. “We came out hard and played well.

“We were excited to play tonight with only one game this weekend. All of us came ready to play. It was a good team effort from start to finish and we got it done at the end.”

Uchacz credited the Pats for pushing the hosts to the limit. 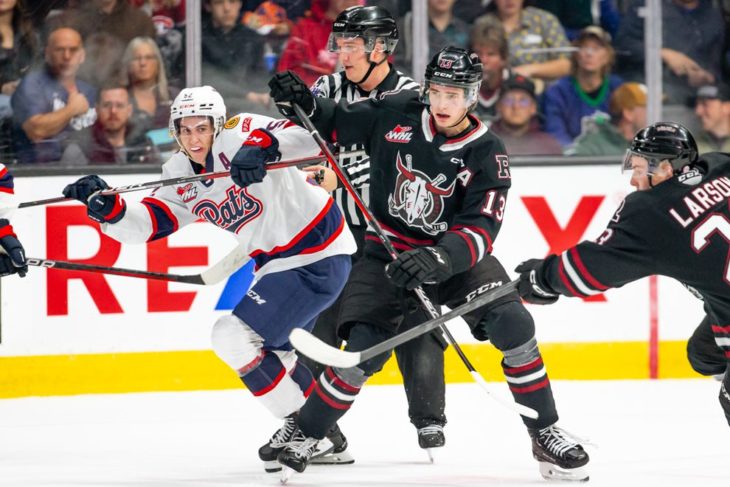 “They gave us all they got,” said Uchacz. “They were fast and played both sides of the ice pretty well. Give them credit for a good game.”

While Uchacz was selected as the game’s first star, he said Kelsey was perhaps more deserving of that honour.

“Kelsey played unbelievable. I think we could have been our first star. He was unbelievable and full credit to him.”

Kelsey was indeed rock solid, coming up with a series of sparkling saves, including a few on Bedard.

“He played a strong game with some timely saves,” said Konowalchuk. “He was huge for us and is just building more confidence in his game.”

“For sure he’s going to get chances,” said the Rebels bench boss. “He’s out there a lot and when they get power plays it makes it harder to defend against him.”

The Rebels were one-for-seven on the power play while the Pats were one-for-six.
“That’s an area where we’re not where we need to be with penalties. He (Bedard) had some good looks but our goalie stood tall.”

The game ended on a physical note when the visitors’ Corbin Vaughn was issued a charging penalty at the buzzer. That led to a fight between the Pats’ Adam McNutt and Rebels second-year defenceman Matteo Fabrizi, who easily handled the Regina veteran.

“The guys stuck up for each other at the end when there was kind of a senseless hit on our player,” said Konowalchuk.

“There was a hit on one of our guys at the buzzer and it was good to have teammates stick up for each other,” added Uchacz.

Notable: Kieper made 19 saves in a losing cause . . . Rebels defenceman Mats Lindgren was selected as the game’s third star after recording a pair of assists . . . The Rebels lost Czech defenceman Vojtech Port to the Edmonton Oil Kings Friday. With the return of Sedoff from the Calgary Flames camp, GM Brent Sutter put Port on waivers after deciding to go with the 20-year-old rearguard and forward Frantisek Formanek as the team’s two allowed imports . . . With Blake Gustafson being dealt to Saskatoon Wednesday and the acquisition of Logan Cunningham from the Spokane Chiefs Thursday, the Rebels have eight defencemen . . . Overage forward Ben King was assigned to the Anaheim Ducks’ AHL farm team in San Diego Friday, but could still return to the Rebels at some point this season.