Rebels come out on short end of close encounter with Ice 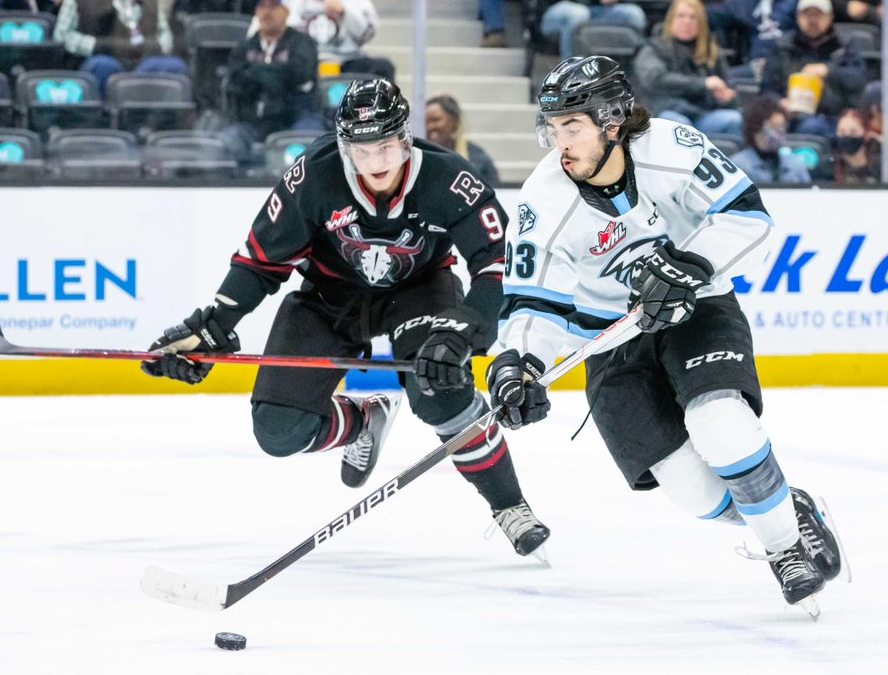 Undefeated through the first nine games of the season and armed with a stacked lineup, the Winnipeg Ice had to be the betting favourites heading into Tuesday’s WHL contest versus the Red Deer Rebels.

As it turned out, it would have a safe bet as the Ice were the better team at the Peavey Mart Centrium.

The visitors came out strong and dominated the first 10 minutes, but the Rebels played their guests at least even up the rest of the way in a 3-1 loss that was in doubt until Connor McClennon scored an empty-net goal with 18 seconds remaining.

The Ice held a 17-8 advantage in shots through the first period but couldn’t get a puck past Rebels netminder Connor Ungar, who was unwavering throughout the evening and finished with 31 saves.

“We weathered a bit of a storm there,” said Rebels head coach Steve Konowalchuk. “At times we showed them a little too much respect but once we got going I thought we played with them and could have won the hockey game.”

With the Ice on the power play, forward Mikey Milne knocked in a loose puck lying in behind Ungar at 15:26 of the second period. But the Rebels responded just over two minutes later with a man-advantage tally of their own as Liam Keeler redirected Jayden Grubbe’s pass over the shoulder of goalie Gage Alexander.

The Rebels carried the play through the second period, enjoying a 12-5 edge in shots and narrowly missing on a few occasions. Jhett Larson had the best scoring chance early in the period when he hit the post with Alexander down and out.

Skyler Bruce scored the eventual winner early in the final frame, cashing a centering pass from Chase Bertholet while unchecked in front.

The Rebels directed seven shots at Alexander the rest of the way but came up empty, setting the stage for McClennon’s late clincher.

“I think we’re right there. We showed we can compete with them,” said Grubbe, the Red Deer captain. “It think it’s just a matter of getting a couple of bounces and coming out a little harder in the first.

“We’ve shown that we can play with the top teams and we can be one of  the top teams in the league, if not the best team. As the season progresses and even into our (upcoming) road trip, we’ll be looking to get those guys back.” 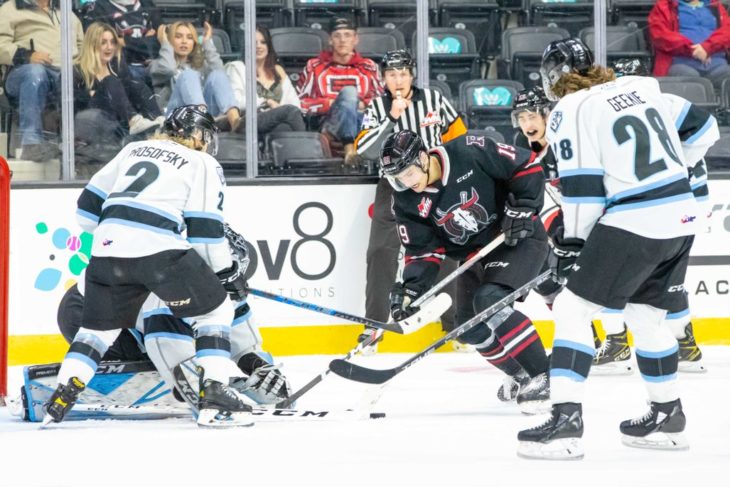 A bounce here or there and it would have been the Rebels celebrating at the final buzzer. The game was that close.

“I think there were some positives to take out of the game for sure,” said Konowalchuk. “It doesn’t feel good right now. Our guys played pretty hard.

“You want to win, you never want to accept losing, so it hurts for the coaching staff and the players in that locker room right now. But there were some positives to take out of it.”

The Rebels are idle until Saturday when they’ll face another tough test in the visiting Edmonton Oil Kings, a top-ranked team that Red Deer has already defeated twice.

“There are still some areas we can improve on as we move forward here and continue to try and improve every day,” said Konowalchuk. “We’ll build off the positives, correct a few things and get right back at it.”

Notable: Alexander made 26 saves for the visitors. The three stars: (1) Bertholet, (2) Rebels forward Arshdeep Bains, who played his 200th WHL game, and (3) Milne . . . Red Deer forward Carter Anderson left the game in the second period after crashing into the end boards and didn’t return. Teammate Ethan Rowland suffered an upper body injury Monday in practice and will be out indefinitely. Josh Medernach remains out indefinitely with a lower body injury while defenceman Joel Sexsmith remains day-to-day with an upper body injury . . . Defenceman Jace Weir missed the game due to a suspension he received for the cross-checking major penalty and game misconduct he received Saturday versus Brandon, the length of the suspension remains to be determined . . . The Rebels host the Edmonton Oil Kings this Saturday, Oct. 30 at the Peavey Mart Centrium (7 p.m.) and visit the Calgary Hitmen Sunday afternoon before returning home to prepare for a lengthy trip into the East Division starting Nov. 4 in Winnipeg. Red Deer will play the Ice twice on the nine-day jaunt that will also include stops in Brandon, Moose Jaw, Regina and Prince Albert. The Rebels’ first home game following the trip will be Nov. 19 against the Hitmen.