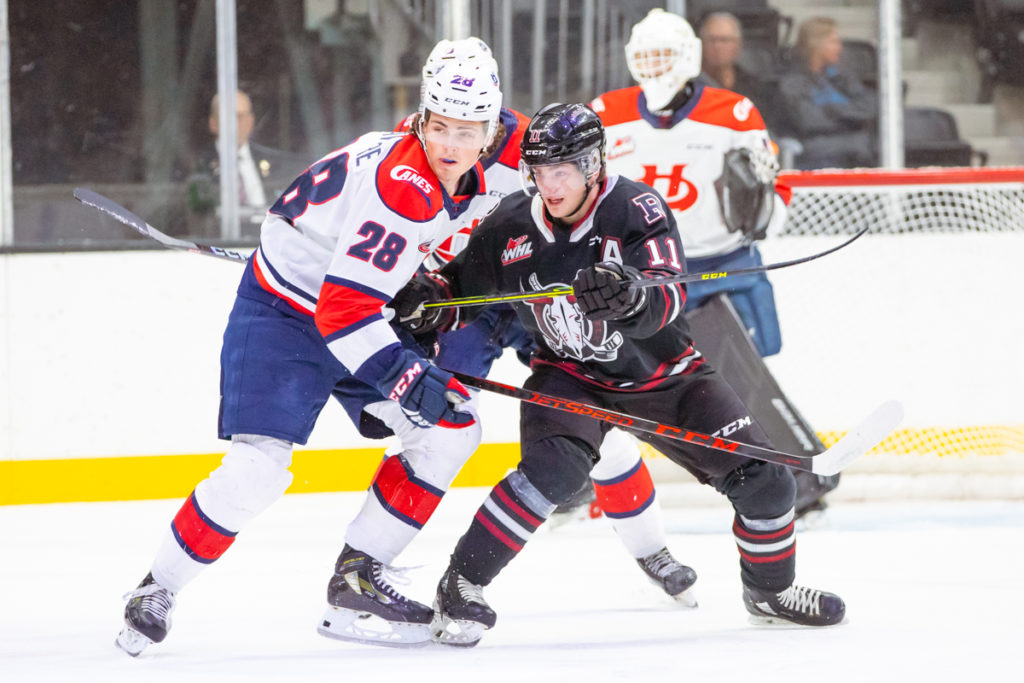 Close, but no stogey.

The Red Deer Rebels made a gallant push late in Saturday’s WHL preseason game at the Peavey Mart Centrium, scoring a pair of goals in the last minute and change to pull even with the Lethbridge Hurricanes at 4-4.

But a scoreless overtime period followed and the Rebels came up short in a shootout, falling 5-4 in the end. Red Deer lost all four of their preseason outings.

The game started on a positive note for the hosts as Craig Armstrong beat ‘Canes netminder Harrison Meneghin with a backhand from in close a mere 62 seconds after the opening faceoff.

But the Rebels then started taking a series of penalties that killed their early momentum and it was something that plagued them all evening.

“The penalties got us in a lot of trouble,” said Rebels head coach Steve Konowalchuk. “We know better than that.”

The Rebels penalty killers, with a helping hand from netminder Kyle Kelsey,  excelled for the most part as the Hurricanes were just one-for-nine on the power play. Red Deer, meanwhile, was zero-for-six with a man advantage.

Still, the steady stream of players to the box hindered Red Deer’s attack in a big way.

“Penalties are the biggest thing,” said Konowalchuk, in reference to various parts of Red Deer’s game that can and will improve.

Most of the infractions were of the stick variety and the Rebels were also  fingered for too many men.

“We deserved them. You have to control your stick, you have to be ready for a line change,” said Konowalchuk. “(Matteo) Fabrizi takes a penalty on a hard hit, you have to be able to kill one of those. But the stick penalties . . . you’re not ready to play.”

The visitors pulled even on a power play goal from defenceman Noah Chadwick just past the midway point of the second period. Chadwick moved down from the point and beat Kelsey through a crowd with a low wrist shot.

Dustin Renas made it 2-1 for the ‘Canes early in the third period, jamming the puck home after it bounced off the end boards and into the side of the crease.

“The turnovers, we have to make harder plays on the wall to get it out,” said Konowalchuk. “We’re stronger in that area and tonight we got away from it a bit.”

Rookie rearguard Quentin Bourne notched his first WHL goal with just over three minutes remaining, his rising wrister from the point catching the top corner behind goalie Brady Smith, who played the second half of the game.

The ‘Canes, however, appeared to put the game away shortly after on a goal by Cole Carrier.

But the Rebels weren’t done. Carter Anderson cashed a backhand with 1:07 remaining and Tanner Brown notched a tying goal with Kelsey on the bench and 1.9 seconds left on the clock.

On the tying goal, Kai Uchacz fanned on a shot, then moved the puck over to Brown who wired home a one-timer from the top of the left circle. Uchacz picked up two assists on the evening, as did defenceman Blake Gustafson.

“The guys didn’t quit. We have a character group here,” said Konowalchuk. “The positive thing tonight was we did finally get going. When we get skating things can happen as we saw at the start and the end of the game.

“It was kind of a tale of two halves a bit. It was an exhibition game, there were exhibition mistakes. I’m glad the exhibitions are over and our players will get ready to roll by next weekend.”

Kelsey had a strong game for the Rebels, making 31 saves before giving up shootout goals to Miguel Marques and Chadwick. Jhett Larson scored the lone shootout marker for Red Deer.

Meneghin stopped 15 of the 16 shots he faced before giving way to Smith, who blocked 15 of 18.

The Rebels open the regular season next weekend with a home-and-home series versus the Edmonton Oil Kings. The teams meet Friday in the provincial capital and Saturday at the Centrium.

“It wasn’t a pretty game tonight but we have a week to really dial in here,” said Konowalchuk.