Rebels close out season with OT loss to visiting Hitmen 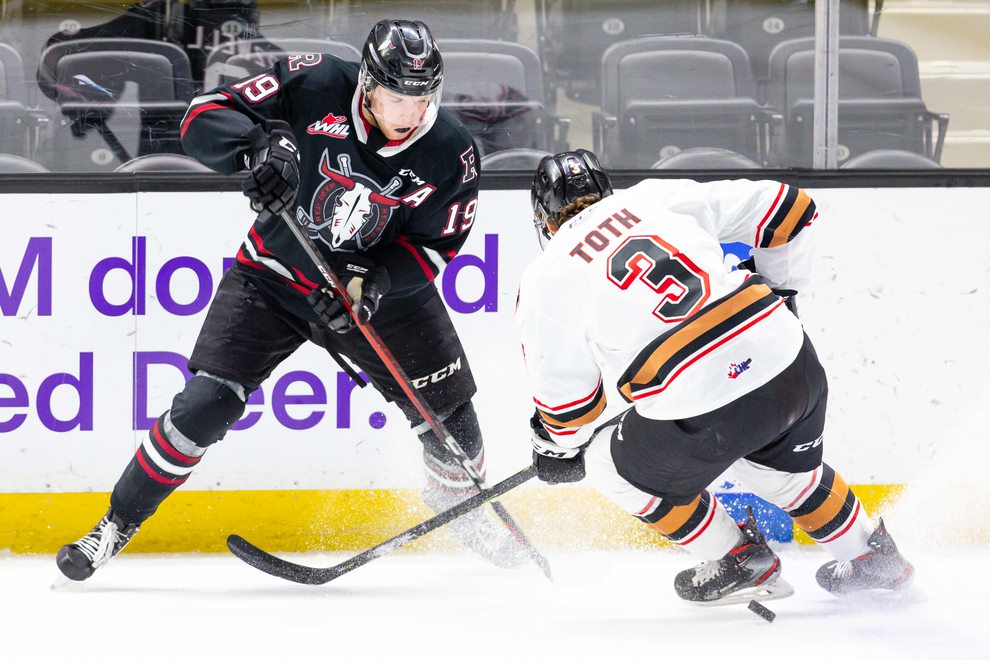 When Calgary Hitmen forward Adam Kydd buried a rebound at 4:21 of overtime the abbreviated WHL Central Division season for both the Red Deer Rebels and Hitmen concluded on Tuesday at the Centrium, with the visitor prevailing 4-3.

Due to the COVID-19 pandemic there was no guarantee there would even be a season and when it did start in late February — nearly one full year after the 2019-20 campaign was halted — the plan was for each team in the division to play 24 games with no fans in attendance.

It turned out to be a 23-game season for the Rebels when a COVID case was detected in the Calgary cohort which necessitated schedule changes.

Throughout it all, the Rebels players spent two plus months living in the Centrium with sleeping quarters set up in the building’s private boxes.

“It was different,” said Rebels assistant coach Ryan Colville. “There were obviously some struggles, but it was very well done by the organization in terms of getting us back going again with the safest way to play.

“The safest way to play can create a bit of a struggle because everyone is around each other all the time, but as the year went on the guys grew together. Through it all we fought some adversity with injuries and everything like that.

“It will help our group in the long run, they’ll appreciate what they had moving forward. Obviously there were struggles but everyone got through them as well as they could.”

Tuesday’s season finale was the fourth straight overtime game between the two clubs dating back to early March, with each team winning twice.

The fourth outing was a see-saw affair in which the Rebels rallied back from a 2-1 deficit with a pair of third-period goals from Ben King, the second coming with 3:15 remaining.

King notched the equalizer by finishing a give-and-go with Arshdeep Bains and then potted a go-ahead marker with a nifty deflection of a point shot by Joel Sexsmith.

The Rebels carried the lead into the final minute when the Hitmen, with netminder Brayden Peters in the bench, forced overtime. Josh Prokop, on his backhand, slipped the puck home at 19:13 during a goalmouth scramble.

Red Deer had most of the chances in the five-minute extra frame, but Peters absolutely robbed Bains twice and the Hitmen finally broke through in the final minute.

“In overtime it’s about scoring chances. If you don’t bury your chances they’re going to get one,” said Colville.

Red Deer wasted an excellent chance to open the scoring early in the contest as the Hitmen were assessed consecutive boarding penalties 54 seconds apart.

But Calgary’s penalty killers prevailed and the scoreless tie held up until late in the period when defenceman Mason Ward’s wrist shot through traffic glanced off the post and in past Peters. 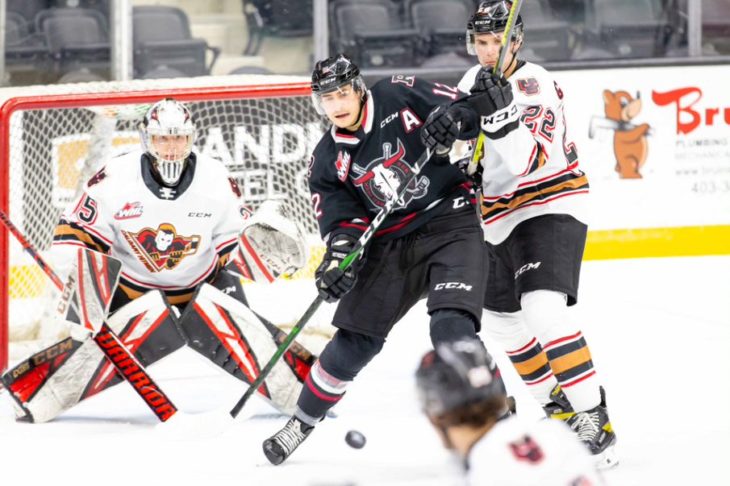 The Hitmen have struggled big time on the power play this season but pulled even on a man-advantage tally from Sean Tschigerl 16:40 of the second period, a goal that was somewhat similar to Ward’s marker.

Isley was also assessed an unsportsmanlike conduct penalty and the Hitmen cashed in with a go-ahead goal when Riley Stotts chipped the puck past netminder Chase Coward.

“It was a roller coaster game for sure,” said Colville. “I thought we started off pretty inconsistent. I didn’t like most of our first and second periods  but in the third period we played some of our better hockey.

“All the guys rallied and we gave ourselves a chance to win. We took it to overtime but couldn’t get it done. But a lot of guys gave a solid effort.”

After suffering 13 straight losses, the Rebels finally got back in the win column on Saturday against the visiting Edmonton Oil Kings, then posted a second consecutive win with a 5-4 overtime conquest of the host Hitmen on Sunday.

The Rebels finished with a 4-15-4-0 record but took some positive signs in the late stages of the season.

“I thought we showed a lot of growth,” said Colville. “I think there were some big steps forward.

“Obviously we leaned pretty heavily on some of our veterans players down the stretch but the younger guys gained a lot of experience. We had a lot of injuries this year and a lot of guys got a lot more ice time than was expected. It’s just going to help them moving forward.”

Notable: Coward had his wrist sliced during a third-period scramble and left the game for a six-minute stretch before returning for the overtime frame. He finished with 42 saves, while Fancy stopped four of the five shots he faced in relief. “He was awesome,” Colville said of Coward, an 18-year-old rookie making just his fifth WHL start. “Our first and second periods were pretty inconsistent and he was sort of a steadying factor, holding us in there and giving us a chance at the end. He cut his wrist, got stitches and came back. Credit to our doctor for getting those stitches in pretty quick.” . . . Peters made 32 saves . . . The Rebels recognized their three graduating players — forwards Chris Douglas and Josh Tarzwell and netminder Ethan Anders — by selecting them as the game’s three stars.