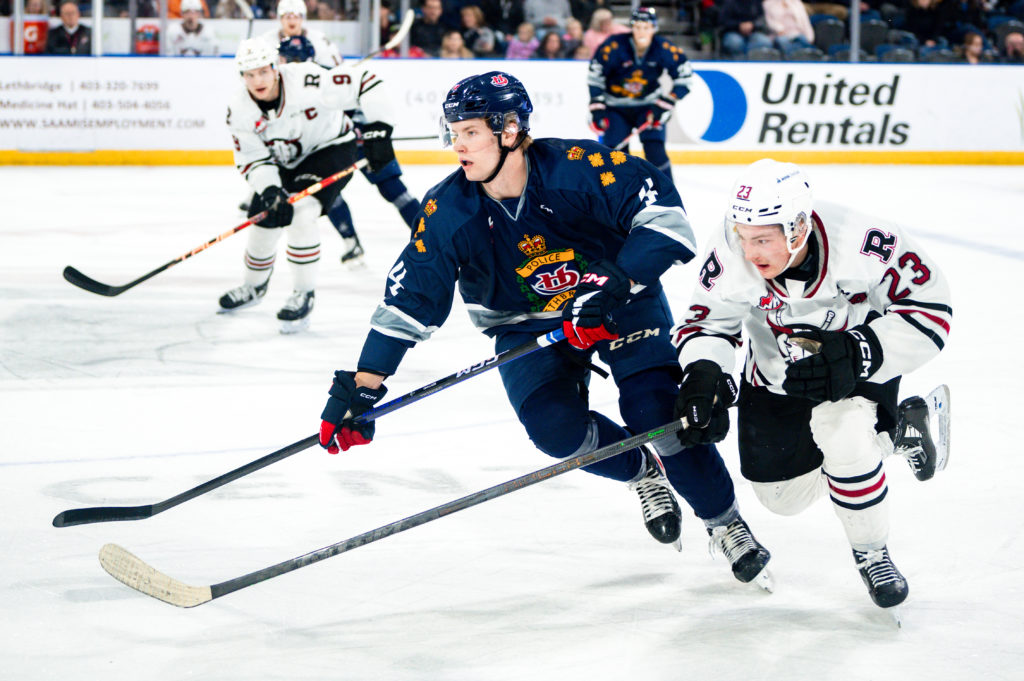 LETHBRIDGE — There are wins that come without going 100 per cent all out and wins that require every last ounce of energy.

The Red Deer Rebels’ 2-1 overtime conquest of the Lethbridge Hurricanes Saturday before 3,716 fans at the Enmax Centre fit into the latter category.

Hunter Mayo’s 14th goal of the season — tops among WHL defencemen — with 5.9 seconds remaining in the extra frame lifted the Rebels to what would be best described as the prime example of a hard-fought win.

“Exactly, you could tell their team came ready to play and so did ours,” said Rebels head coach Steve Konowalchuk. “It was a good back-and- forth first period and both teams got good goaltending.

“I liked the way our team persevered and our pace held up pretty good for 65 minutes.”

The second and third periods were more of the same, with both regulation-time goals scored in the second.

Kalan Lind potted his 12th of the season 2:13 into the second stanza to give Red Deer a lead. Fresh out of the penalty box after serving a coincidental minor penalty, the left-shot 2023 NHL draft prospect broke over the blueline and from his off wing wired a shot over the glove of netminder Harrison Meneghin.

Miguel Marques evened the count just under 10 minutes later, converting a rebound from the edge of the crease.

While the Rebels held a 19-5 advantage in shots through the second period, the teams pretty much traded momentum in the third period and overtime frame.

And despite the bursts of scoring chances from start to finish, there wasn’t much for open space.

“That’s the way these guys play and we try not to give up open ice,” said Konowalchuk. “You have to expect a game like that against these guys, especially here.”

The game appeared headed to a shootout when Lind circled the net and passed out to Mayo in the low slot. The third-year defender followed with a wrist shot that glanced off Meneghin’s arm and into the back of the cage.

The goal made for a two-point night for Lind, who will play in the CHL/NHL Top Prospects Game Jan. 25 in Langley, B.C.

“He’s an all-around hockey player,” said Konowalchuk, who likes the skill, grit and spirit the 18-year-old forward brings to the team. “He finishes checks, he’s in front of the net.

“Guys (opposing players) get mad at him but he plays an honest, clean  game because he plays hard. He’s a big part of our team and it was a real big game by him.”

The win put the wraps on a successful week that also included a 4-3 shootout victory over Moose Jaw Wednesday and Friday’s 4-1 triumph over Edmonton.

“It makes the trip home better, it makes the week better,” said Konowalchuk, whose crew will be back at practice early this week to prepare for home games Friday and Saturday against Prince George and Brandon, and a date with the host Calgary Hitmen Sunday.

“It’s always fun to have a week to work with a good feeling versus a bad feeling, a bad taste of losing. The guys worked real hard and now it can be easier to work hard and have fun all week.”

Notable: The Rebels were zero-for-five on the power play, the ‘Canes zero-for-three . . . Meneghin made 37 saves while Stoesser blocked 31 shots . . . The three stars (presumably selected prior to overtime) : (1) Meneghin, (2) Stoesser and (3) Marques . . . The Rebels leap-frogged the Winnipeg Ice into first place in the Eastern Conference with Friday’s win, and still hold a single-point lead over the Ice who thrashed Medicine Hat 8-2 Saturday. Winnipeg, however, has played five fewer games than Red Deer, who are three points clear of third-place Saskatoon. The Blades have three games in hand on the Rebels . . . Saskatoon and Winnipeg visit the Peavey Mart Centrium Jan. 27 and 28 . . . The Rebels’ Jan. 31 date versus Connor Bedard and the Regina Pats is sold out. A limited number of seats and standing room tickets will be released closer to game-day.