Rebels bury their chances in home-ice victory over Raiders 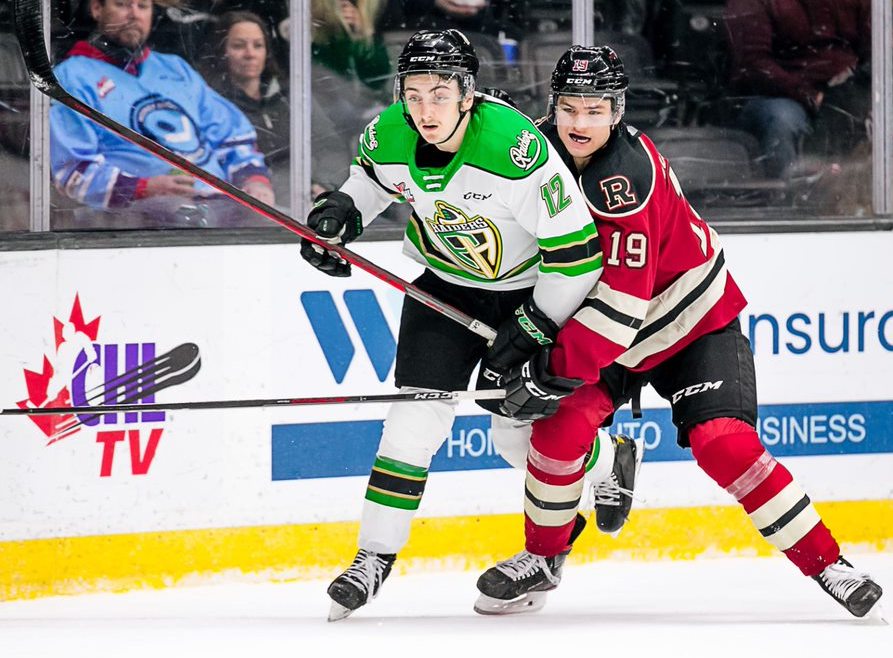 The Prince Albert Raiders, for the second night in succession, outshot their WHL opponent.

The difference in both outings was the home teams made their shots count, including Saturday’s game at the Peavey Mart Centrium where the Red Deer Rebels posted a 5-1 victory.

Ben King and Kai Uchacz each scored twice for the winners, while netminder Connor Ungar made 28 saves — including 14 in the third period — while making his first start since Nov. 7 in Winnipeg.

The Rebels started somewhat slow but came around to score twice in the opening period.

Hunter Mayo, from the point, fired a shot off the end boards and Kalan Lind was there to bury the rebound 6:22 into the contest. Just under nine minutes later, King tallied his 13th of the season — and the eventual winner — off a perfect saucer feed from Arshdeep Bains, breaking to the net and beating netminder Carter Serhyenko high to the glove side.

“I thought the first period was a little bit of a chess march, not a ton going on,” said Rebels head coach Steve Konowalchuk.

“They (Raiders) played smart, put a lot of pucks deep and made us come the full 200 feet. But we stuck with it. I thought we were good with the puck and it was a good team effort.”

The second period was scoreless before the Rebels pulled away with three goals in the final 20 minutes.

Uchacz (pictured above) potted his fifth of the season a mere 51 seconds into the third, whipping home a rebound after Serhyenko kicked out a point shot by Christoffer Sedoff.

From there, King fired his second of the night at 11:49, capping a nifty three-way passing play that included Bains and Jhett Larson, and Uchacz scored roughly a minute later when he tapped in a net front offering from Dallon Melin.

Even Herman, on the power play, spoiled Ungar’s shutout bid with under three minutes remaining, chipping the puck past the Rebels goalie from the edge of the crease.

“The (Jayden) Grubbe line (with Liam Keeler and Blake Stevenson) played again their top line and played well against them,” said Konowalchuk. “That’s a good line over there.

“The guys we needed to produce produced and we got good goaltending again. And our third and fourth lines, you can’t say enough about the energy and the depth they provided us. It was a good all around team game.” 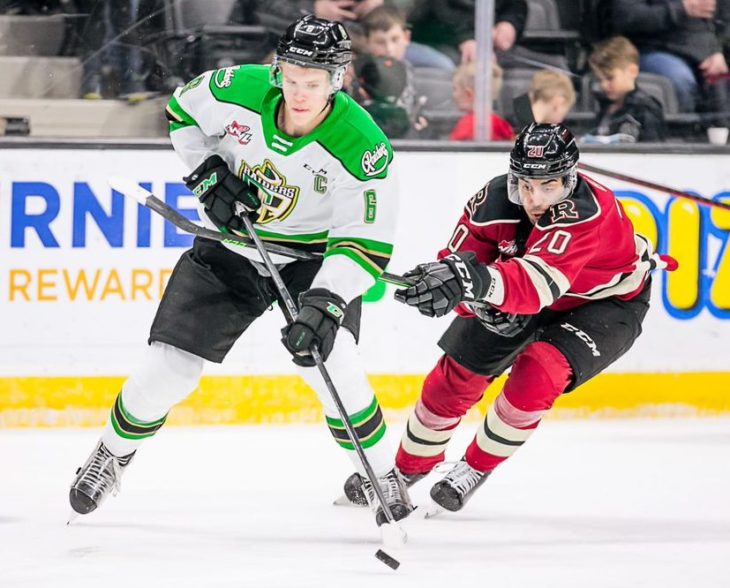 The Raiders, who produced 47 shots in a 6-3 loss in Edmonton the night before, pushed the pace at times Saturday, particularly in the third period despite giving up a trio of goals.

“It was a battle and a grind,” said Uchacz. “That’s how we have to play every night. We have to come ready to battle and just play a full 60 minutes.”

“They came and they definitely had a purpose to grind us out and make us play in our end,” added Konowalchuk. “I thought we had to defend a bit at times but we did a fairly good job of that, getting in shot lanes.

“Then when we needed a save Ungar was good in net.”

One night after teammate Chase Coward posted his first ever WHL shutout in a 2-0 win over the visiting Calgary Hitmen, Ungar made a series of fine saves while recording his sixth win of the season.

“Our goalies were huge for us this weekend,” said Uchacz. “They’ve been big for us all year. This weekend, one goal against.

“Both of them played unbelievable. Give credit to those guys, they battled and they’re a big reason why we’re winning.”

Konowalchuk called having both Coward and Ungar in the stable a ‘luxury’.

Notable: The Rebels were zero-for-three on the power play, the Raiders one-for-four . . . Serhyenko made 18 saves . . . Uchacz was honoured prior to the game with the Rob Rae Clothiers plus-minus award for the month of October. He was plus-14 during the month . . . The three stars: (1) King, (2) Uchacz and (3) Raiders centre Vladislav Shilo . . . The Rebels are idle until Wednesday when they travel north to face the Edmonton Oil Kings. Red Deer and Edmonton are tied for top spot in the Central Division. The Rebels will return home following the contest to prepare for Friday and Saturday home games against the Saskatoon Blades and Regina Pats.